AceShowbiz –Ariana Grande, Demi Lovato and Elliot Page (Ellen Page) are among famous names who speak out against Texas’ “inhumane” trans youth order. The Hollywood stars took to social media to stand up for trans rights.

Ariana made use of her Instagram Story on Thursday, February 24 to repost the American Civil Liberties Union account’s post after Attorney General Ken Paxton issued a written opinion defining gender-affirming care among kids as “child abuse” under state laws, which Governor Greg Abbott supported. In the post, the ACLU claimed that the Governor’s letter has “no legal effect, can’t change Texas law, and can’t override the constitutional rights of Texas families.”

In a following Story, Ariana reshared a Story of a trans woman who began her transition at 5 years old. In her message, the said woman urged Governor Greg not to “let people of Texas suffer for [his] own ignorance.”

Also weighing on the issue was Demi. The “Sorry Not Sorry” hitmaker showed their support by reposting author and activist Glennon Doyle’s post that claimed “transgender and gender non-conforming children” in the state. “You are beloved. We see you. We stand with you,” the quote continued. 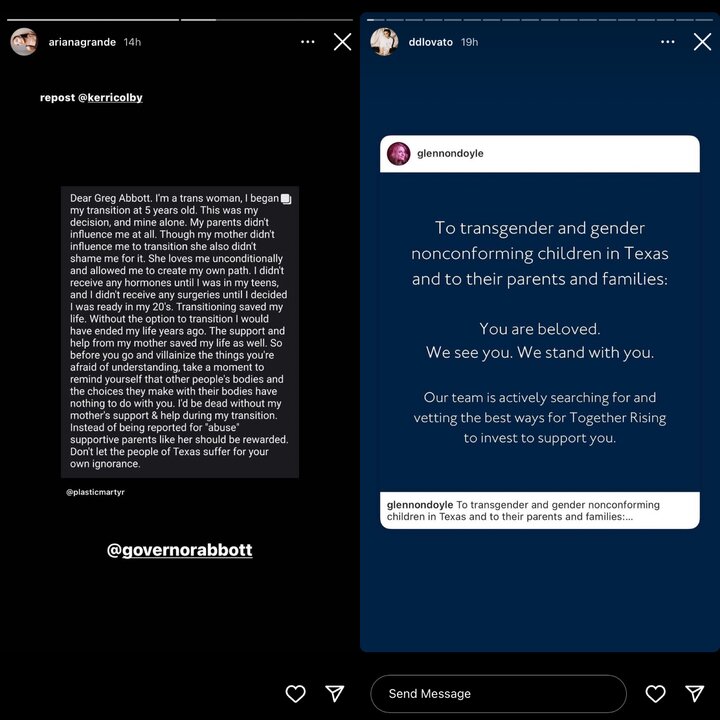 Elliot also condemned the actions. Speaking to Variety, the “Juno” star said, “I am horrified by the inhumane and downright dangerous declarations by the Texas Governor and Attorney General.” The 35-year-old actor added, “Trans youth deserve gender-affirming care and to be able to live their true, authentic selves without fear and oppression. I stand with trans youth and their families.”

The protest came after Attorney General Ken declared that hormone therapy, puberty blockers and other types of gender-affirming health care for trans youth are forms of child abuse on February 21. “There is no doubt that these procedures are ‘abuse’ under Texas law, and thus must be halted. The Texas Department of Family and Protective Services (DFPS) has a responsibility to act accordingly,” he said, “I’ll do everything I can to protect against those who take advantage of and harm young Texans.”