He underwent a massive 20kg weight loss and overhauled his wardrobe in the lead-up to the federal election in May.

And it seems Anthony Albanese has continued to focus on his looks since becoming prime minister and the political face of the nation.

The 59-year-old is looking more refreshed and ‘camera ready’ of late, sporting a smoother complexion and a more youthful skin texture. 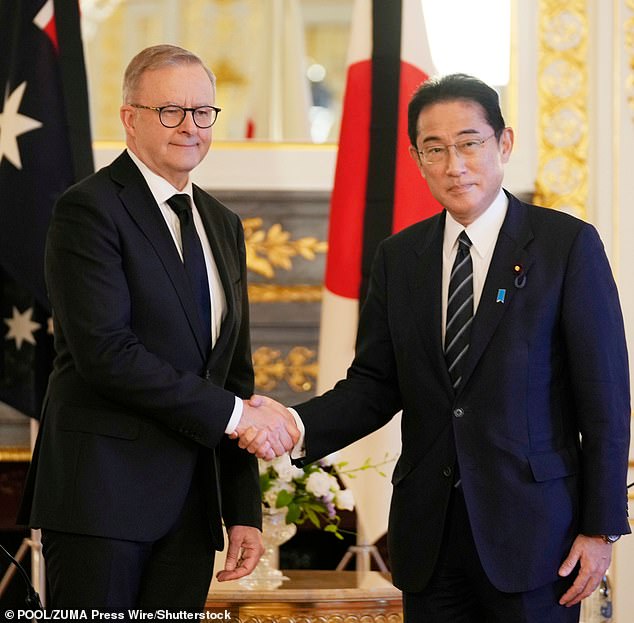 PM Anthony Albanese, 59, (left) sported a rejuvenated complexion on Tuesday as he met with his Japanese counterpart Fumio Kishida (right) in Tokyo

Mr Albanese’s new look was especially noticeable on Tuesday when he met with Japanese Prime Minister Fumio Kishida in Tokyo.

Shaking Mr Kishida’s hand, Mr Albanese looked remarkably fresher than he did while posing for his official prime ministerial portrait a few months ago.

While there are many reasons why Mr Albanese looks to have turned back time, Australian cosmetic surgeon Dr Naomi McCullum has suggested cosmetic treatments could be at play. 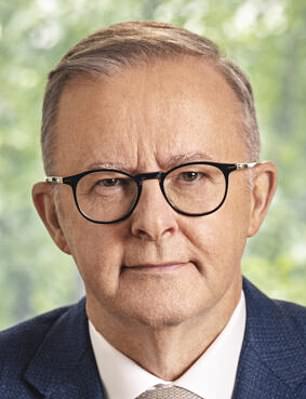 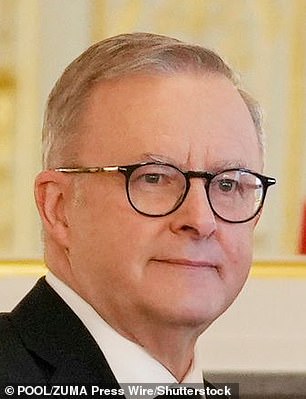 While there are many reasons why Mr Albanese looks to have turned back time, Australian cosmetic surgeon Dr Naomi McCullum has suggested cosmetic treatments could be at play. (Pictured left is Mr Albanese posing for his official Prime Ministerial portrait taken in May, and right is Mr Albanese on Tuesday looking more youthful)

‘Looking at the images from his last press conference, his skin does look a bit smoother and plumper,’ Dr Naomi told Daily Mail Australia this week.

‘Has he had some laser, or the newly released injectable Profhilo? Or has he been using some cosmeceutical skincare?’

Profhilo is a type of injectable that involves placing a hyaluronic acid moisturising treatment beneath the skin to create a subtle plumping effect . 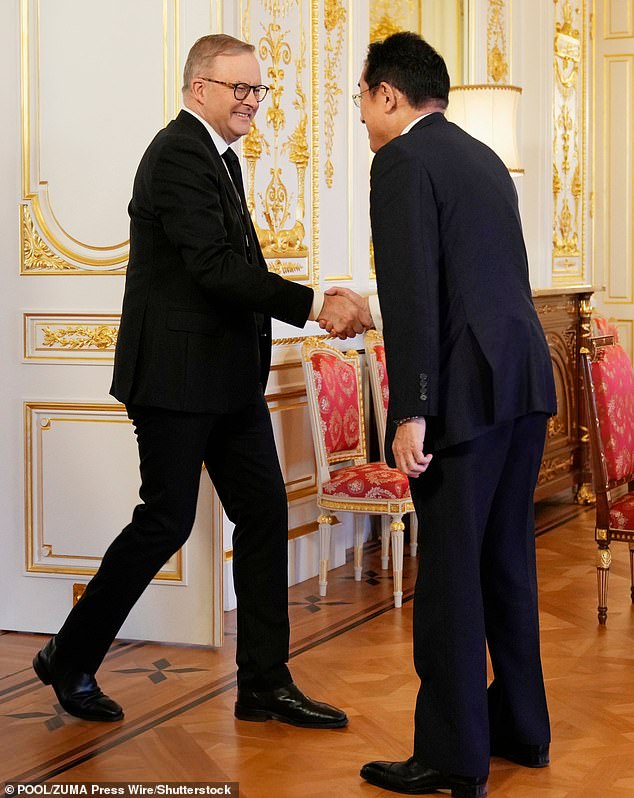 The cosmetic expert, who works out of her exclusive Sydney clinic The Manse, also speculated Mr Albanese could have had a small amount of Botox

The cosmetic expert, who works out of her exclusive Sydney clinic The Manse, also speculated Mr Albanese could have had a small amount of Botox.

‘His frown lines are still etched in but his frontalis muscle does look more relaxed,’ she said.

‘Maybe it’s just great lighting or Photoshop. Either way he’s looking very refreshed for someone with the tough job of running the country,’ Dr Naomi added. 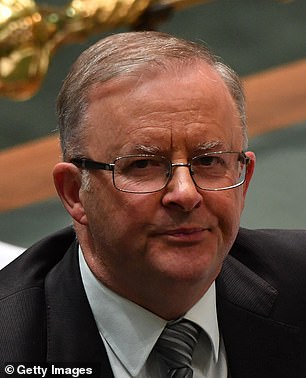 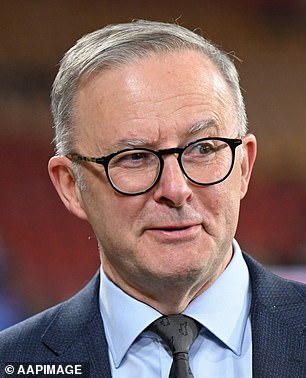 Meanwhile, Clinical Nutritionist Lee Holmes from Supercharged Food has suggested Mr Albanese’s recent health kick could be behind his improved complexion. (Mr Albanese is pictured left in March 2021, and right in September 2022)

‘Regarding his glow up, weight loss doesn’t always mean clearer skin, as losing weight on a low calorie and nutritionally devoid diet can make the skin dull and lifeless. 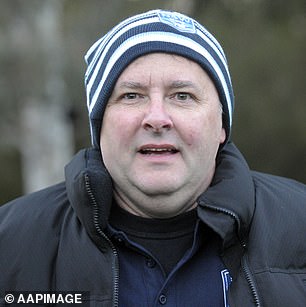 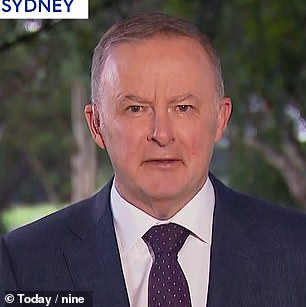 Mr Albanese lost 20kg and overhauled his wardrobe in the lead-up to the Australian federal election in May. (Pictured right in June 2013, and left in December 2021)

‘However, losing weight typically means that a person is making healthier and more intelligent food choices, which would mean he would be eating less processed foods and sugar – which affect the skin negatively – and more fresh choices and fruit and vegetables.’

Mr Albanese has been slowly revamping his look for some time now, with one of the most noticeable changes being his teeth.

Once a snaggletoothed statesman, Mr Albanese openly admitted in 2015 to having braces and eventually dental implants to fix his ‘terrible working-class teeth’. They also appear to have been whitened in recent years. 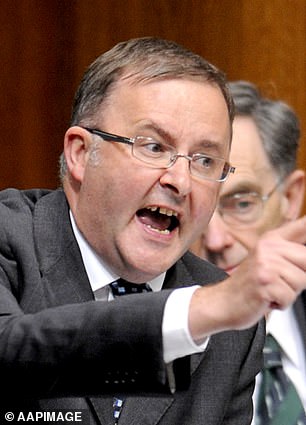 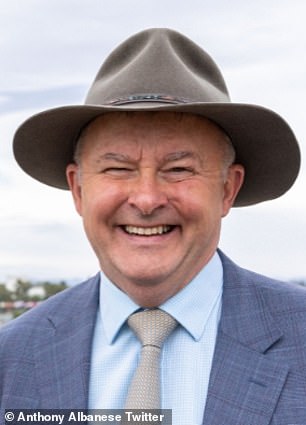 Once a snaggletoothed statesman, Mr Albanese openly admitted in 2015 to having braces and eventually dental implants to fix his ‘terrible working-class teeth’. (Pictured left in 2009 prior to dental work, and right in May 2022 after braces and veneers)

Mr Albanese also sported an assortment of shabby haircuts during his earlier years in parliament, but has since embraced a slicked-back, side-parted ‘do .

Another noticeable change is that Mr Albanese has been wearing his glasses less, perhaps swapping them for contact lenses.  Alternatively, he could have improved his ailing eyesight with laser eye surgery. 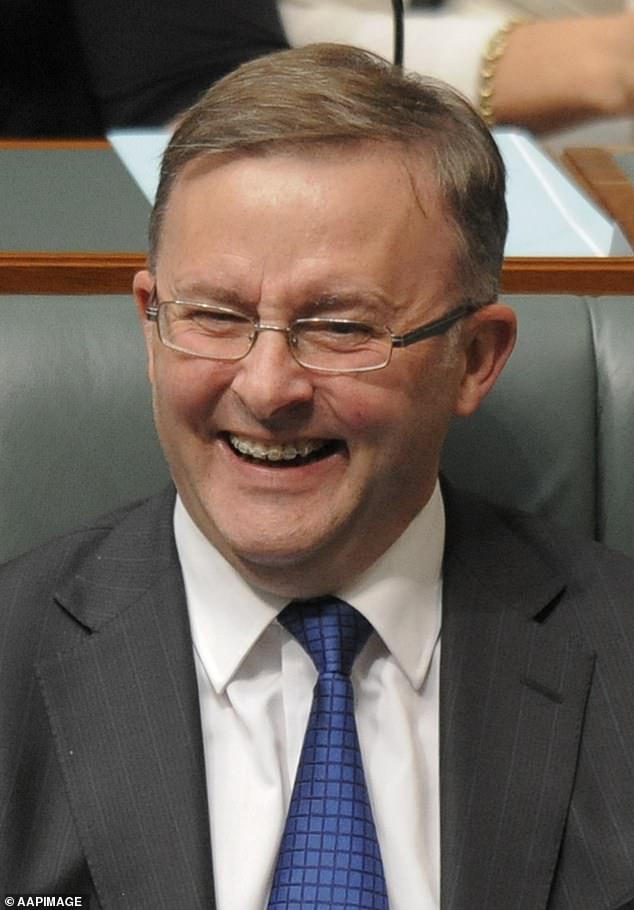 Mr Albanese is pictured with braces in 2011

Mr Albanese has been open about his incredible weight loss, having shed 20kg in less than a year ahead of his election campaign against Scott Morrison.

The politician dramatically transformed his physique by giving up alcohol for three months, cutting out carbs, going on long walks and installing a treadmill in his Canberra office.

He also plays tennis twice a week and goes on regular bike rides around the city. 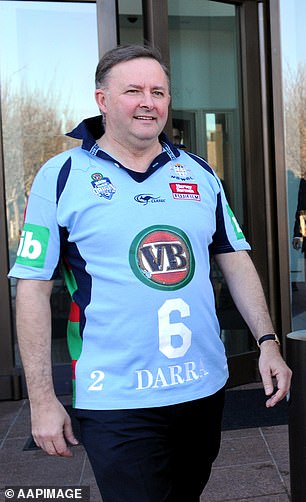 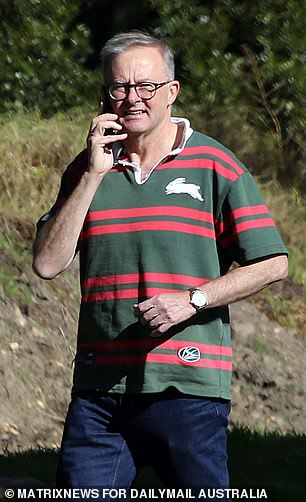 Mr Albanese has been open about his weight loss, having shed the unwanted kilos in less than a year ahead of his election campaign against Scott Morrison. (He is pictured left in June 2013 before weight loss, and right in May 2022 after weight loss)

Mr Albanese first decided to slim down in preparation for the Three Capes walk, a three-day, 48km trek in south-east Tasmania, which he completed in January 2021.

Speaking to Daily Mail Australia in May, Mr Albanese said the secret to his incredible transformation is ‘commitment and discipline’.

‘It’s not easy in your late 50s to lose 20 kilos but I’ve done it without anything other than controlling what you put in and what you do in terms of just food choice,’ he said. 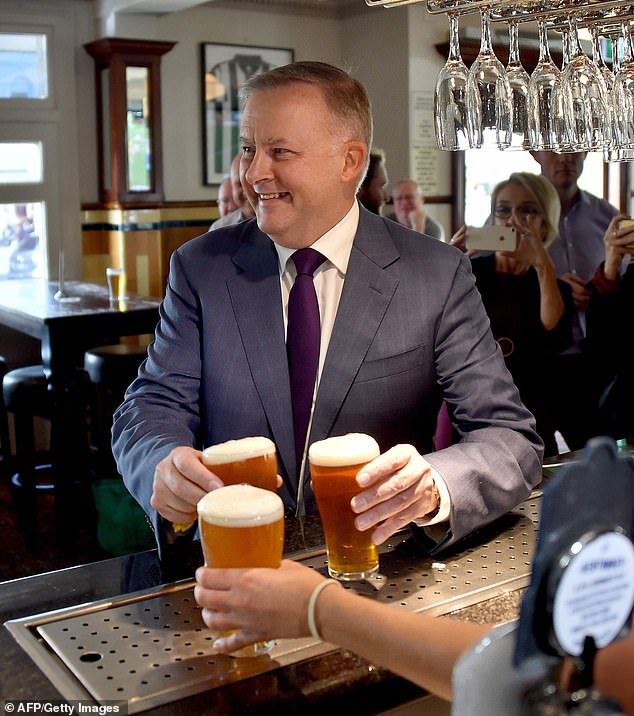 Mr Albanese also gave up beer and wine for three months to slim down. Before this year he was often pictured drinking craft beer. He is pictured at a Sydney pub in May 2019

Diet: The Labor leader has largely cut out carbs and unhealthy snacks. He has eggs instead of cereal for breakfast, salad for lunch and meat and two veg for dinner instead of pasta or potatoes.

Drink: Mr Albanese cut out alcohol for three months and now only drinks on the weekend instead of during the week.

Exercise: The 58-year-old has installed a treadmill in his office, goes on long walks with his dog and plays tennis twice a week. He also rides his bike

Sleep: Mr Albanese said he’s sleeping better and is mentally fitter due to his weight loss

Mr Albanese also revealed how surviving a car crash in January 2021 inspired him to embrace a healthier lifestyle.

‘When you have a head-on car accident and there’s a Range Rover coming for you full bore and you survive you think about your health, and it did make me really determined to do so. I’m proud,’ he said.

The politician, who enjoys red wine and craft beer, also noted the importance of moderation when it comes to dieting.

‘I’m careful but not fanatical about it. I think that’s the key as well – done over that period of time. I still have a beer. I had a kebab last week. But I haven’t had very many,’ he explained.

‘So it’s just a matter of being sensible and really health conscious. And I’ve got to say, I have so much more energy.

‘It’s put a spring in my step and for someone who’s got back issues from accidents – I’ve had three major car accidents in my life, well two in a car and one on a motorbike – less weight has meant my back’s better, I feel much better for it,’ he said.

Previously Mr Albanese would eat cereal for breakfast and pasta and potatoes with lunch and dinner – but now he’s largely carb-free.

‘Now I have eggs for breakfast rather than cereal and will typically eat meat and couple of veg for dinner,’ he said.

‘I’ll have a salad for lunch and have cut out chips and biscuits and try to eat healthily between meals as well.’

In February 2022, he debuted his suave new appearance in a glossy Women’s Weekly photoshoot with his girlfriend Jodie Haydon. 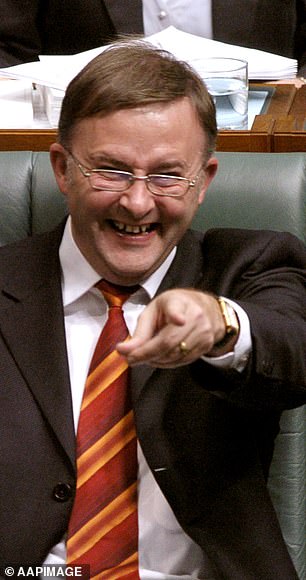 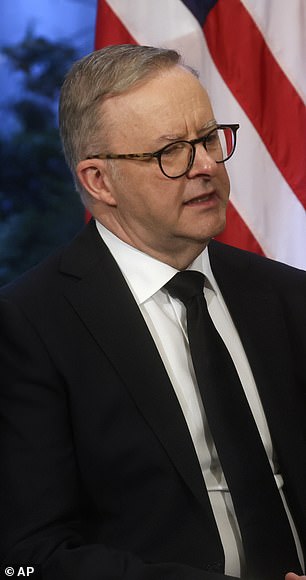 He also recently snapped up some $349 Byblos Black Havana spectacles. (He is pictured left in December 2006 with his older spectacles and right in September 2002 with his fancy new frames) 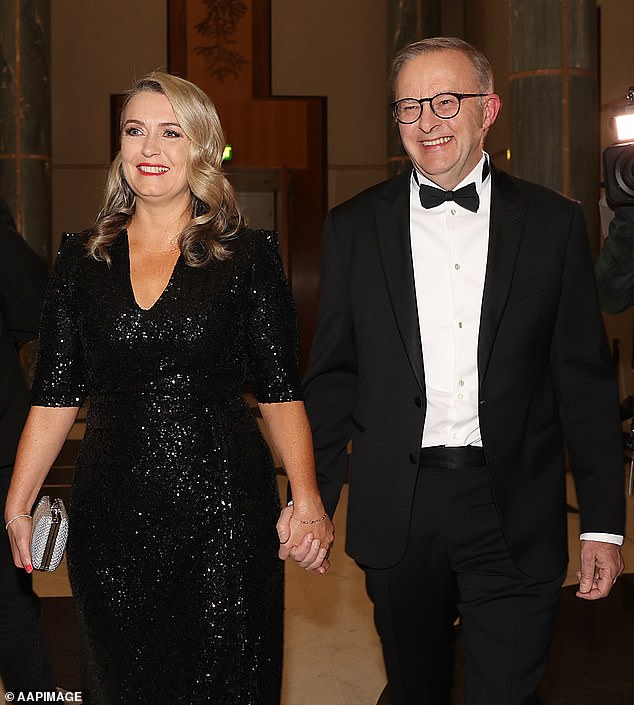 In February 2022, he debuted his suave new appearance in a glossy Women’s Weekly photoshoot with his girlfriend Jodie Haydon. The couple are pictured at Canberra’s Midwinter Ball in September 2022

‘Albo is looking pretty stylish in the classic combo of a white shirt and well fitted chinos. His white trainers are a big trend at the moment and the blue stripe even matches Jodie’s dress.’ 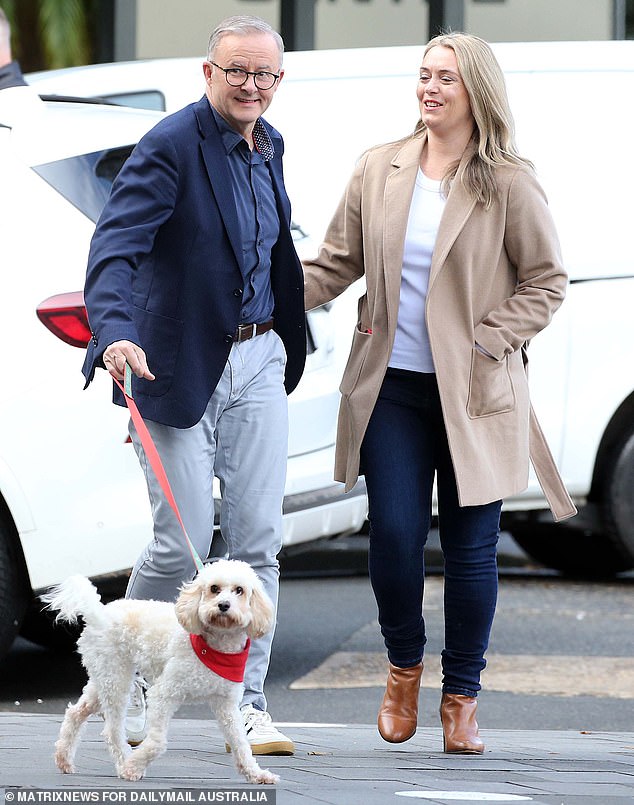 Australians fawned over his ‘hot’ new look Mr Albanese posed in a fitted white shirt, skinny grey chinos and $129 Country Road gum sole sneakers. Albanese and Haydon are pictured looking stylish with their dog in May 2022