‘Why don’t these people just f**k off!’: Love Island’s Anna Vakili hits back at trolls who accuse her of flying to Dubai in lockdown after posting throwback bikini snap

Anna Vakili furiously hit back at a troll who accused her of breaking lockdown rules to fly to Dubai, after she uploaded a throwback bikini snap on Thursday.

The Love Island star, 30, who has returned to her pharmacist job during the pandemic, was faced with backlash when she shared a snap with sister Mandi in the UAE on Instagram on Thursday.

Many mistakenly thought she had broken the travel ban on non-essential trips to fly out to the popular celebrity hotspot, but Anna firmly told them the photo was taken in September last year, when travel was legal. 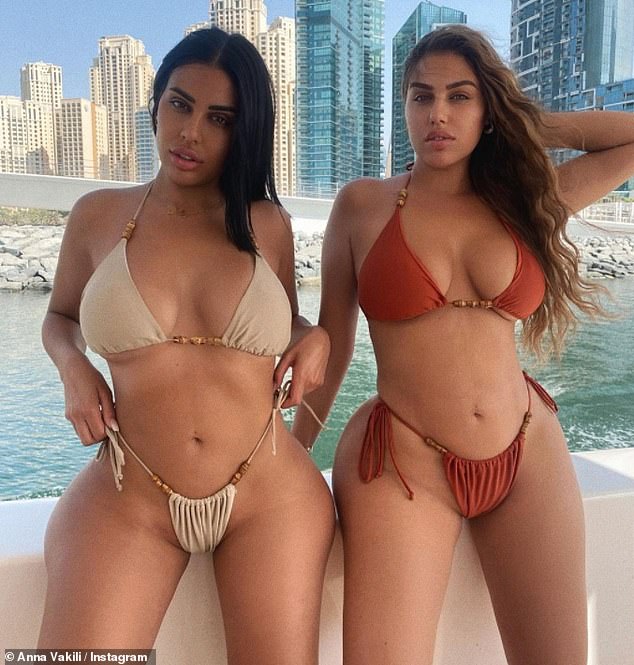 In the snap, Anna smouldered for the camera wearing a very skimpy brown string bikini for the show-stopping throwback snap.

Anna and Mandi, 28, were perched on the side of a boat, with staggering views of a Dubai cityscape behind them.

Both wore beaded bikinis, with Anna’s in the gorgeous rust tone, and Mandi’s a chic shade of light brown. 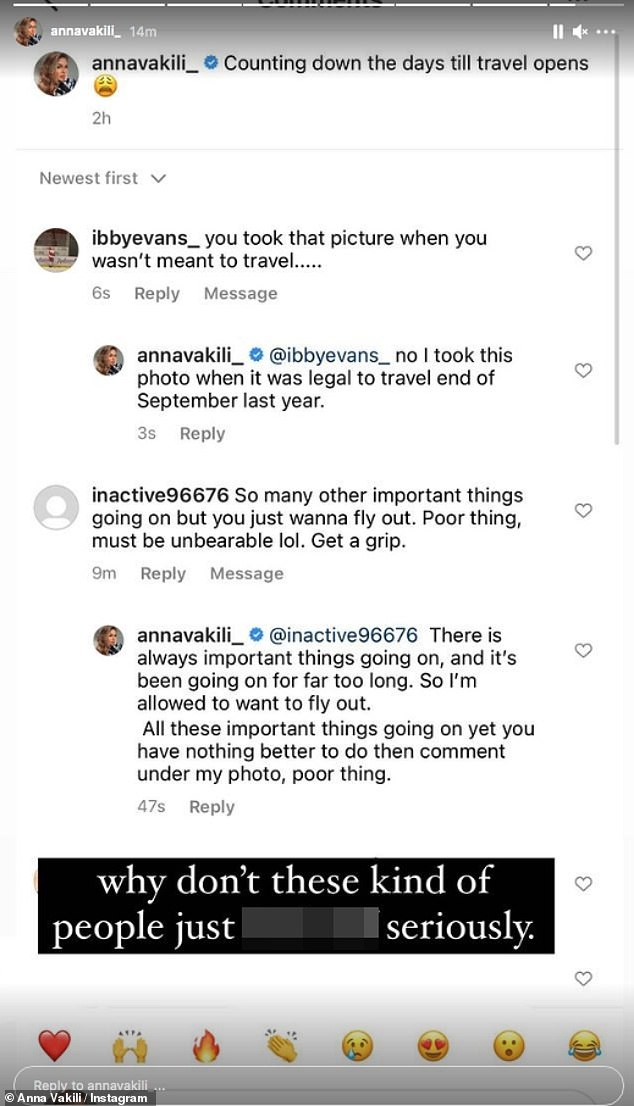 ‘Just f**k off!’: The Love Island star, 30, was faced with backlash when she shared a snap with sister Mandi in the UAE on Instagram on Thursday

‘Counting down the days till travel opens,’ mused Anna in the caption.

But in the comments section, one follower wrote: ‘You took that picture when you weren’t meant to travel…’

To which Anna hit back: ‘No I took this photo when it was legal to travel end of September last year.’

Another user typed: ‘So many important things going on but you just wanna fly out. Poor thing, must be unbearable lol. Get a grip.’

She rounded it off by saying: ‘Why don’t these kind of people just f**k off, seriously.’ 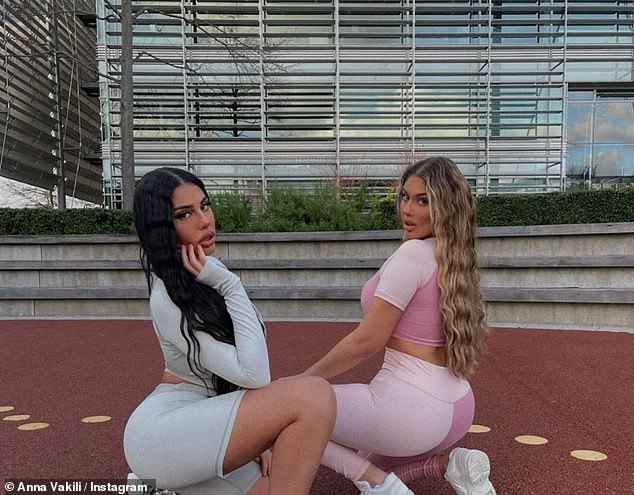 Up and away: Anna, (right), said that she can’t wait to travel, telling her followers: ‘Counting down the days till travel opens’

After visiting a London dentist with her sister Mandi on Tuesday, Anna revealed that she is making some changes to her appearance.

Explaining her decision in videos posted to her Instagram stories, Anna said: ‘Today I’ve started my Invisalign journey… After seeing Mandi’s teeth I decided it’s time for me to do mine.

‘Basically, what I’m going to do us get a wider smile and also hopefully reduce my overbite as well.

‘Once the Invisalign has done it work – it’ll be 4 months I have them – then I’ll be ready to get some new veneers.

‘I’m excited,’ smiled Anna as she told her followers they’d be receiving regular updates on her dental progress on her Youtube channel.

In February, the social media sensation hit out at stigma surrounding women and how they dress, saying a woman can be both sexy and smart. 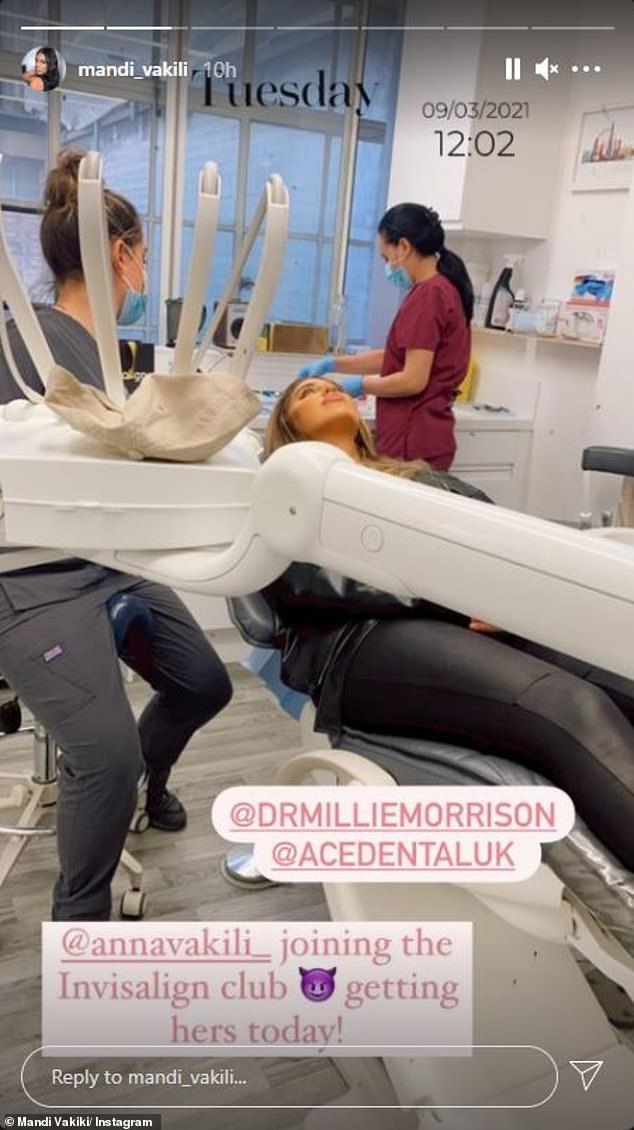 New teeth: After visiting a London dentist with her sister Mandi on Tuesday, Anna revealed that she is making some cosmetic changes to her appearance

Sharing two side-by-side photos on Instagram that saw her wearing very different looks, Anna reflected on how women are judged for what they wear.

In a lengthy caption, she wrote: ‘Stigma and stereotype. Two concepts that’s follow women around from the moment they enter the social world.

‘Boring, frigid, s****y, dumb. I mean, the list of words used to label women is endless,’ she continued. 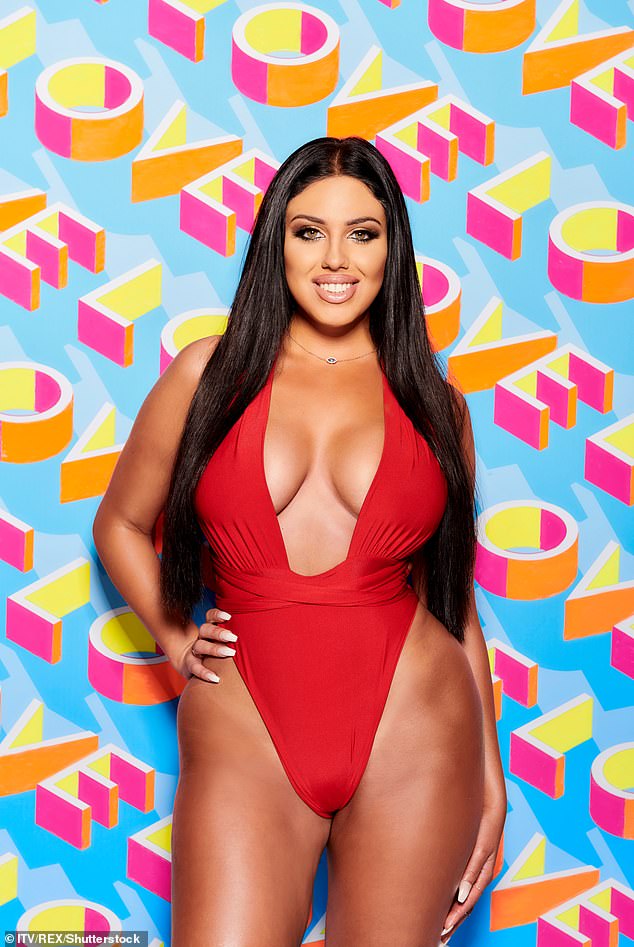 Rise to fame:  In 2019 Anna was scouted by Love Island and was sent a message via social media about appearing on the show

‘It’s unfair, that women feel the need and pressure to conform to one stereotype and please a certain group of people, and in doing so must sacrifice a whole other side of themselves and who they are in the process.

‘I have for so long been stuck in a conflicting crisis of which one am I? Who am I? Until now. Now I can finally say I am BOTH. And screw anyone who can’t accept that.

‘I won’t forget this great scene in Sex & The City, when Miranda sarcastically dismissed a guy she met at the bar who said that women are usually smart OR beautiful and a man can not wish for both. 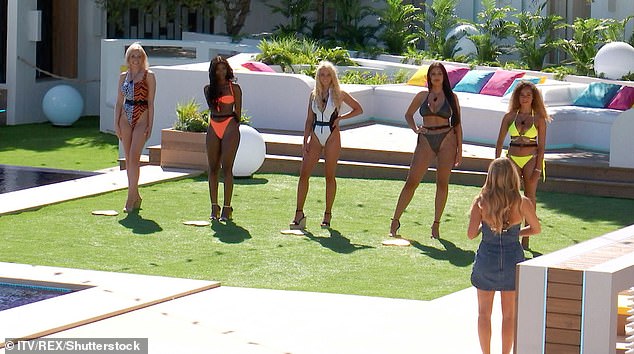 Summer loving: In February Anna (right, pictured in 2019 in the Love Island villa) was contacted by hopeful applicants for the 2021 instalment of the hit show

‘The stigma and stereotype attached to a woman who finds self empowerment and confidence in being sexy and therefore feeling sexy, is that she is most likely brain dead.

‘This is false and needs to change. A woman can be anything she wants to be and express it in anyway she finds suitable for her.’

She concluded: ‘And intelligence, education, smart sharp wit and all other intellectual qualities have nothing to do with what a women wears, how she looks and chooses to portray herself.’ 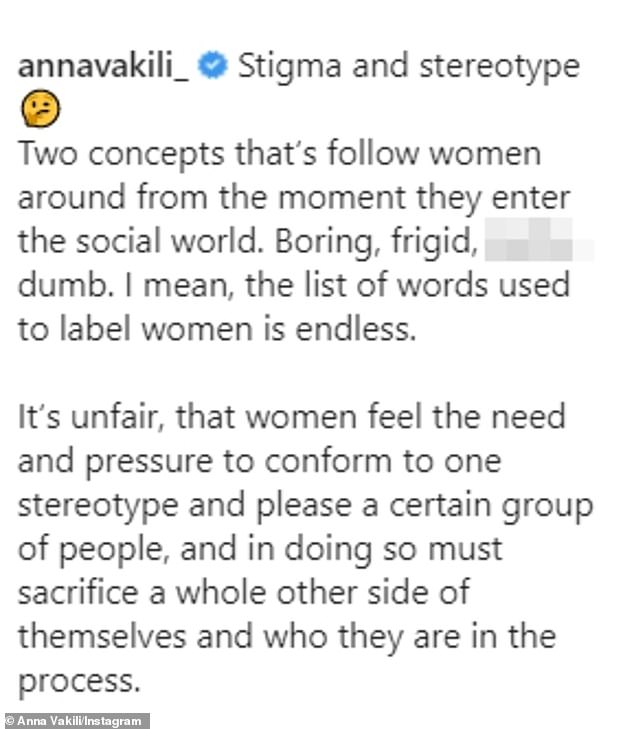 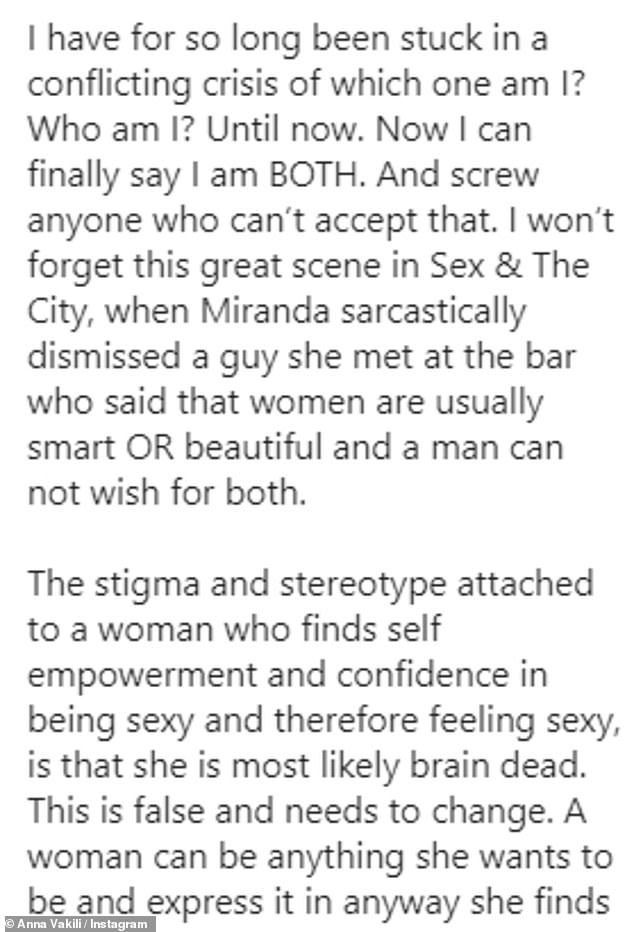 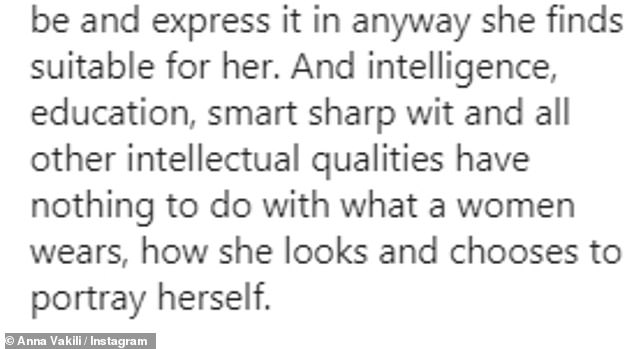 Taking a stand: Anna hit out on Instagram, saying she struggled with her identity because of stigma around women celebrating their sexiness

The curvaceous bombshell shot to fame following her 2019 stint in the Love Island villa, and last month revealed that she’d been contacted by hopeful applicants for the 2021 instalment of the hit show.

She told The Sun: ‘I’ve had a few DMs from people within the last month saying, ‘oh I’m going for an interview for Love Island. Have you got any advice?’

According to Anna, she didn’t know any of them personally, but nevertheless wished them luck.

She added: ‘I took the time to respond because I know how nerve-wrecking that process is, so when I saw a message like that I felt I had to reply – I knew it would help them feel better.’

The model was scouted by the dating competition and sent a message via social media about appearing on the show.

Anna was working in a pharmacy at the time, had approximately 40,000 followers during the casting process, but now boasts an Instagram following of 1.2 million. media.

Shortly after leaving the Mallorcan villa, the media personality embarked on a new relationship, but has kept mum on her partner’s identity ever since.

‘He’s a private person who doesn’t have Instagram’, the TV star, who has teased her beau in her cheeky Instagram captions, told MailOnline.

‘I think I feel pressured to get married and have kids because of my age. I do want to marry him in the future. Coming from a Middle Eastern background, being married and having kids by 30 is very much pushed onto us.

‘I don’t care as I’m not going to give in to the pressure, I’m not ready to get married or have kids, I’m having too much fun. F**k society’s stereotypical standards!’ 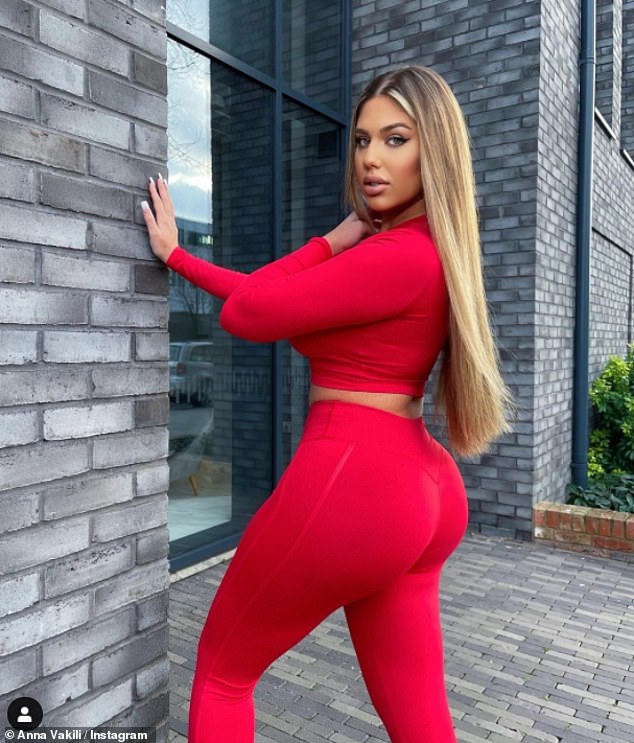 New man: Shortly after leaving the Mallorcan villa, the media personality embarked on a new relationship, but has kept mum on her partner’s identity ever since