Ana de Armas has shared new imagery from her upcoming Marilyn Monroe biopic Blonde, where she bears an uncanny resemblance to the screen siren.

The 34-year-old Cuban-Spanish actress posted four snaps to her 7.3million Instagram followers on Wednesday, showing her recreate iconic moments from the Hollywood star’s career that will feature in the Netflix project.

They included a classic scene from the 1953 film Gentlemen Prefer Blondes that was famously copied by Madonna in her 1984 music video for the hit song Material Girl. 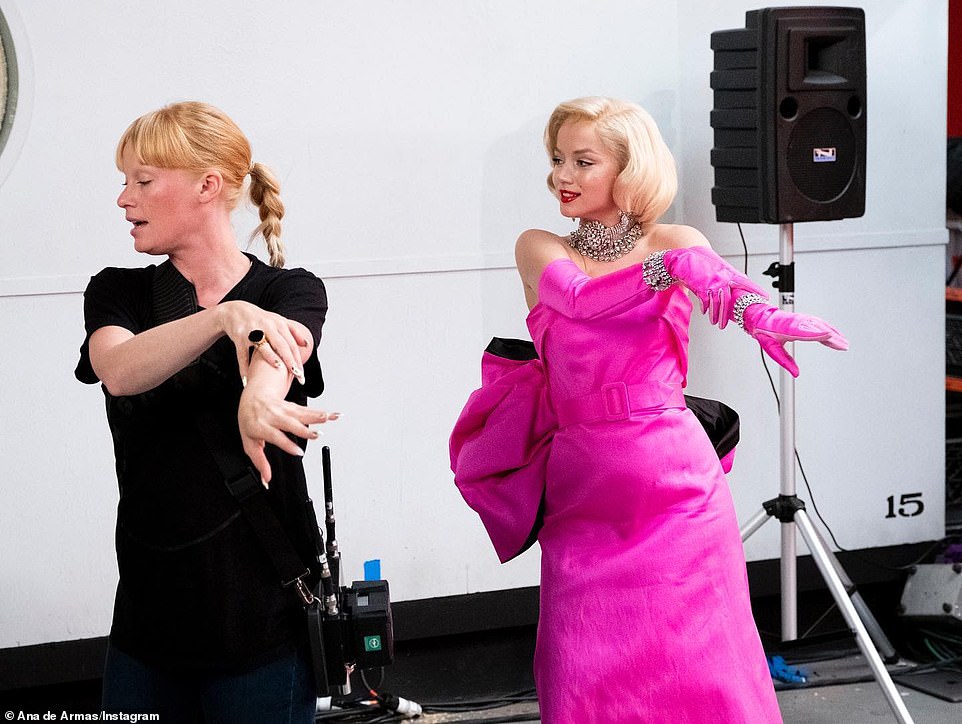 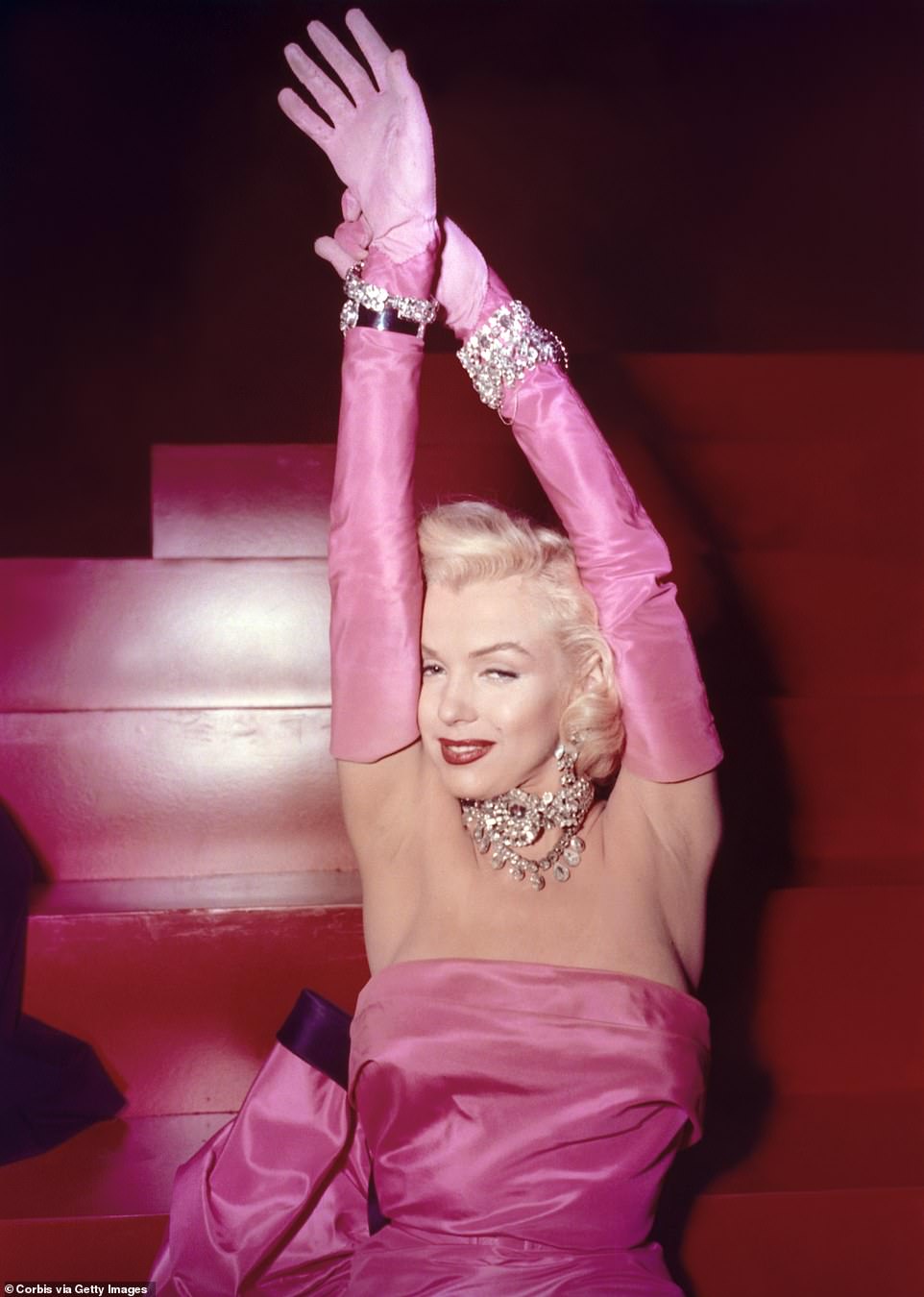 Ana could also be seen taking direction from a choreographer as she recreated the acting legend’s famous moves in the scene where Marilyn sings ‘Diamonds Are a Girl’s Best Friend’ in the pink dress designed by William Travilla.

In another image, Ana recreated classic pictures with some of Marilyn’s ex-husbands playwright Arthur Miller (played by Adrien Brody) and Joe DiMaggio (played by Bobby Cannavale.) 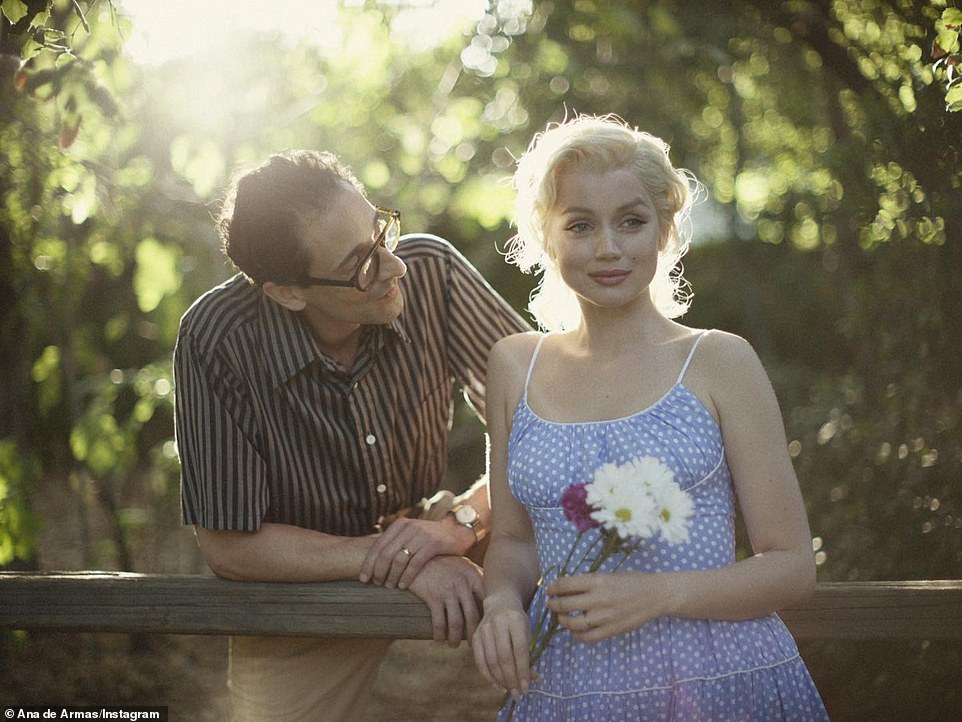 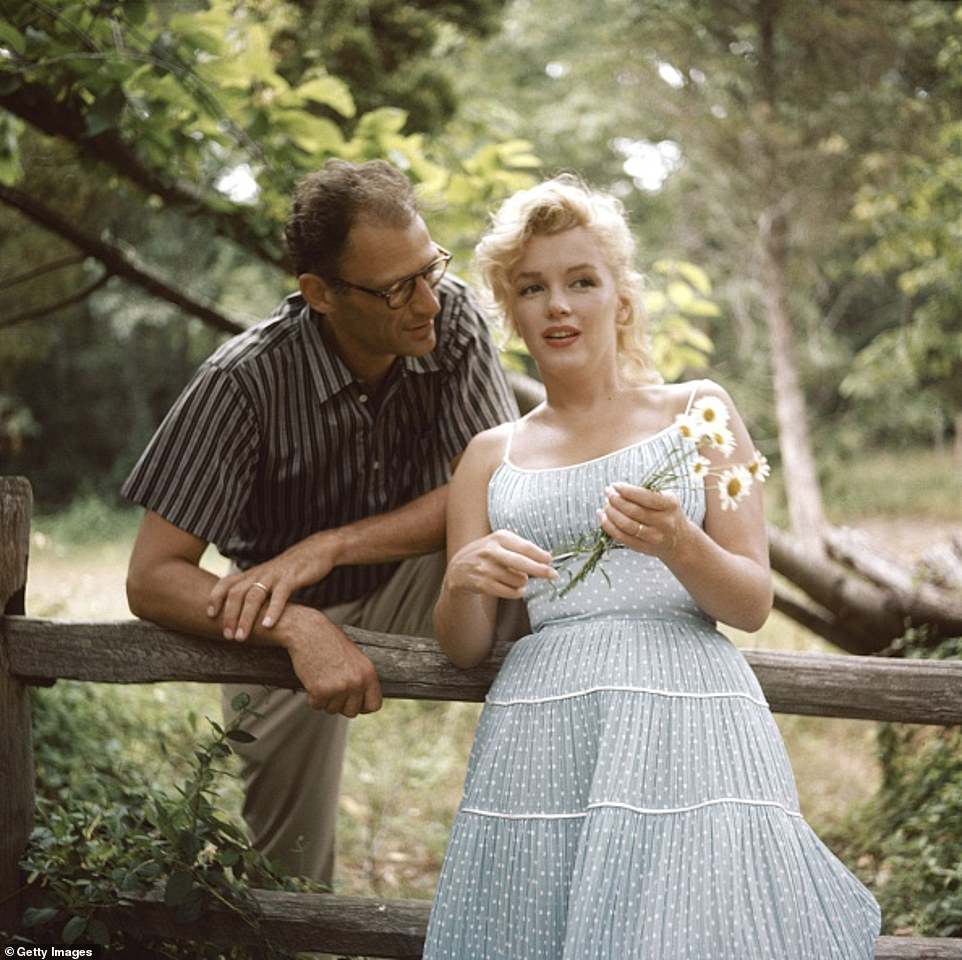 Comparison: Marilyn with her husband, playwright Arthur Miller in 1957 in Amagansett, New York

Captioning the images, Ana praised her co-stars writing: ‘It was such a gift to get to work with actors like @adrienbrody and @bobby_cannavale on this beautiful project.’

She added: ‘Can’t wait for everyone to see the wonderful work they do in this film.’

Ana then named New Zealand-born Australian director Andrew Dominik in a hashtag, and teased fans that a new trailer for the movie will be dropping tomorrow. 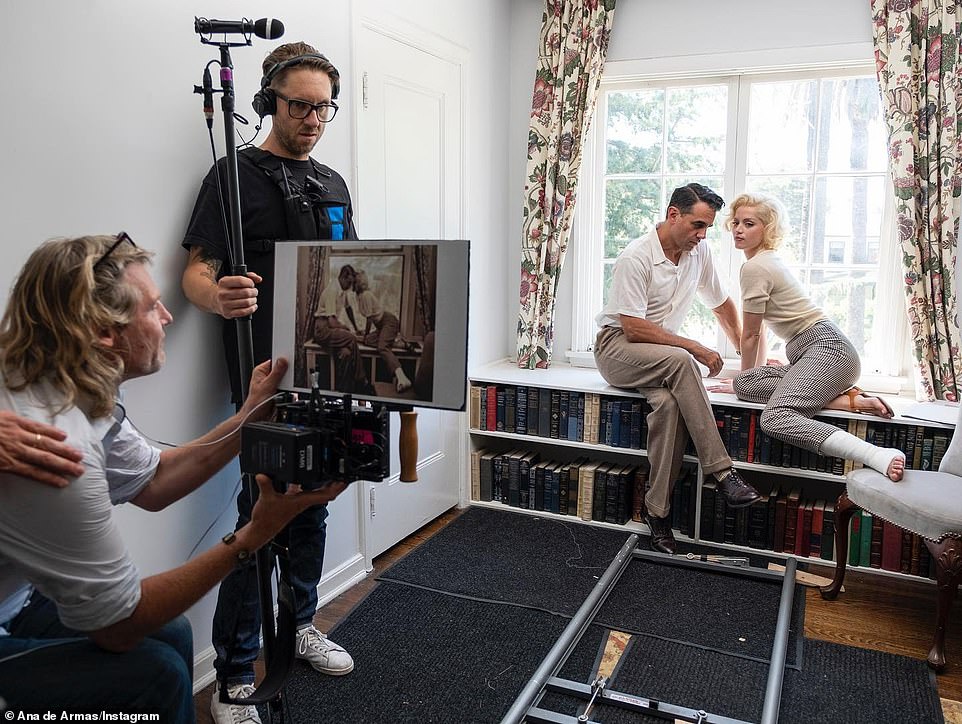 Exes: Her second husband, American baseball player Joe DiMaggio, is played by Bobby Cannavale, and the pair are pictured above recreating a shot of the couple 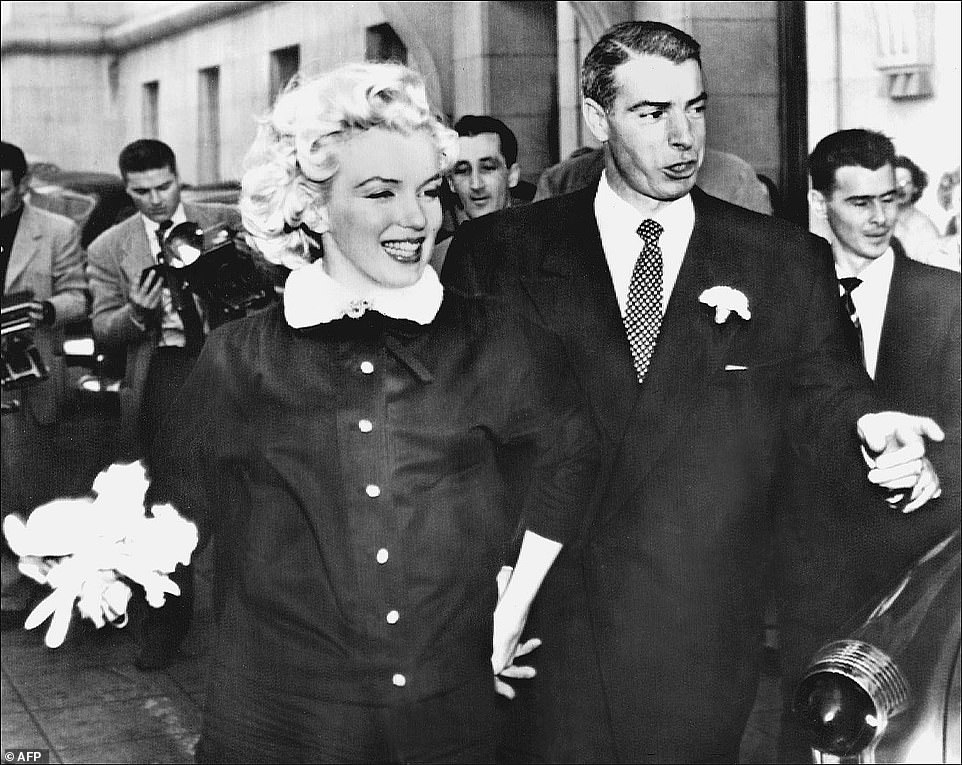 Earlier this month, a clip from the upcoming film had a haunting tone that suggested Monroe was vulnerable yet caught up in her own movie star image.

In scenes from the film, Ana goes from weeping to smiling as she looks in a mirror at her own superstar appearance, and then laughing, which hints at her erratically changing moods.

The movie goddess is also seen being mobbed by fans and the press as the police help the distressed celebrity through a crowd. Over the clip, Diamonds Are A Girl’s Best Friend is sung in a slow, moody voice.

Oscar-winner Jessica Chastain, 45, was also in talks in 2014 to play Monroe. 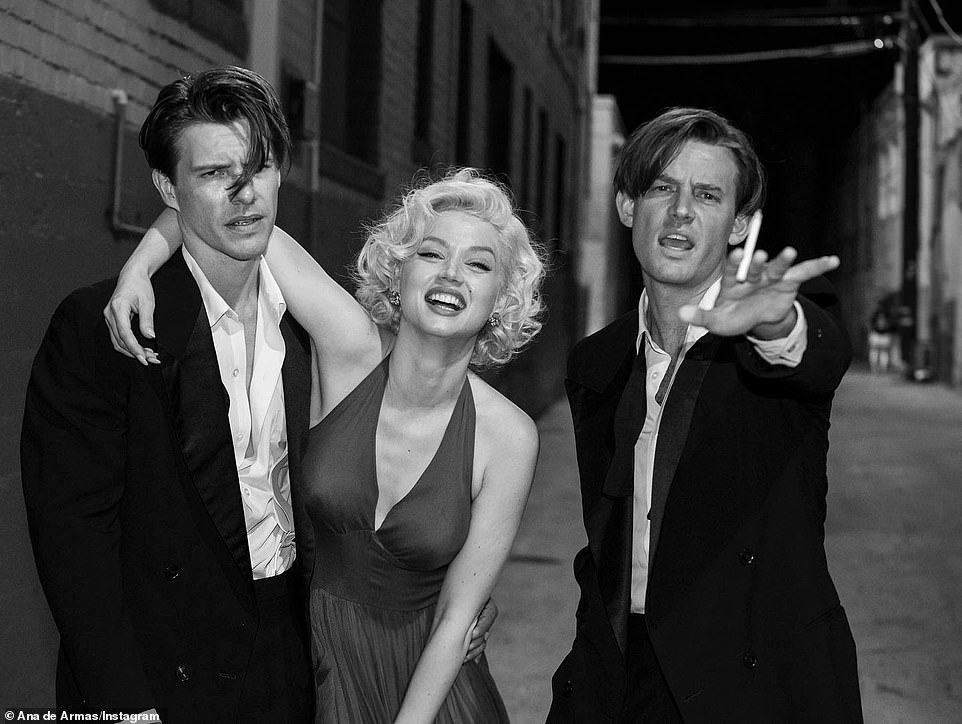 Classic scenes: In another image it looked as though Ana was channeling Marilyn in the iconic film The Seven Year Itch 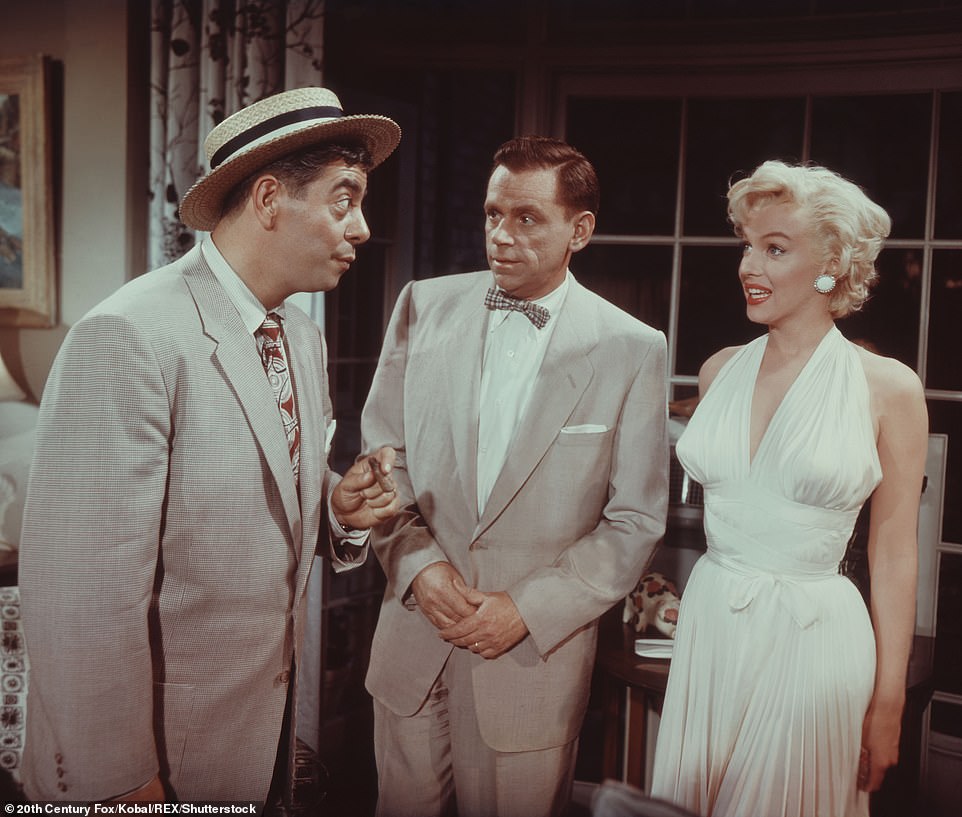 Dominik gushed about the actress while responding to a question about his casting of Australian actor and comedian Eric Bana, 53, to portray notorious Australian criminal Mark ‘Chopper’ Read in his 2000 biopic Chopper.

‘He could do Mark. I don’t know if you’ve ever seen Mark ‘Chopper’ Read, the real guy? It’s unbelievable how close Eric is to that guy.

His own father thought that in some parts of Chopper, it was actually Mark. Usually, the problem with most films is they’re miscast. Not most films, but it can happen,’ Dominik said.

‘It’s the same problem with Blonde. You have to cast somebody that you buy as Marilyn Monroe. She’s amazing, that girl. You’ve got no idea, dude. You’ve got no idea how good Ana is. She’s as good as James Gandolfini,’ he declared.