Amanda Seyfried is trying to advocate for women and realistic body images.

But as she learned online on Thursday, it’s not as straight-forward as it seems. 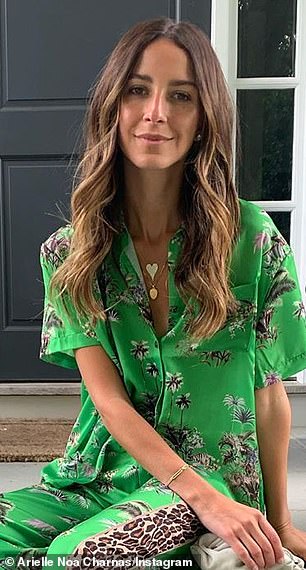 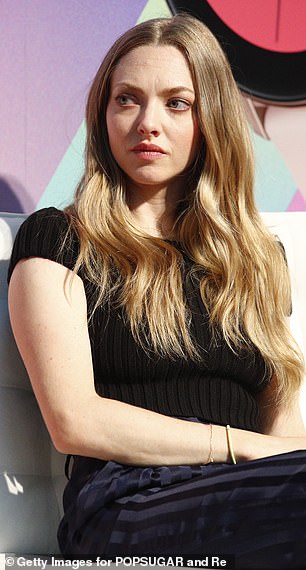 The day before, Seyfried had taken to Instagram to post a comment that a ‘very smart friend’ – her close pal Sophie Flack, the wife of The Good Wife star Josh Charles – had left on one of Charnas post, calling her out for ‘glorifying an unhealthy body image.’

The post in question is of Charnas showing off her extremely slender figure in a tiny green bikini, with the caption ‘Proud of my body after two kids.’

Charnas, who runs Something Navy, a lifestyle and clothing brand, posted the pic to her 1.2 million followers on Tuesday and the reaction was mixed, with the image sparking a controversy over unrealistic beauty standards.

Many of her followers praised the post, cheering the mom on for her ‘amazing’ looks.

But others, including Seyfried’s friend Flack, were less than impressed.

After the image was shared by Charnas, Flack left a fiery comment, writing: ‘Thank you @ariellecharnas for acknowledging your privilege/multiple caregivers who made your excessive workouts possible oh wait,’ prompting Arielle to fire back: ‘Is there a problem?’ 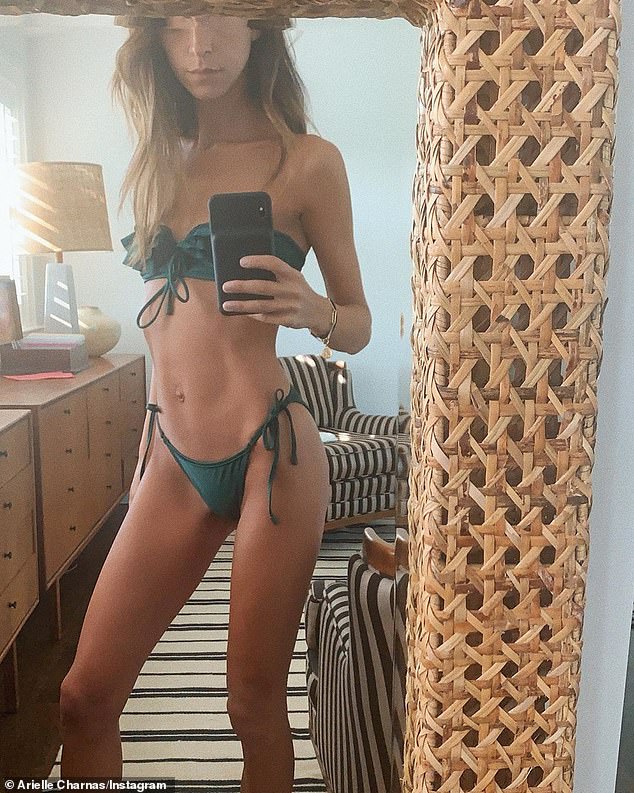 Post in question: The post is of Charnas showing off her extremely slender figure in a tiny green bikini, with the caption ‘Proud of my body after two kids’ 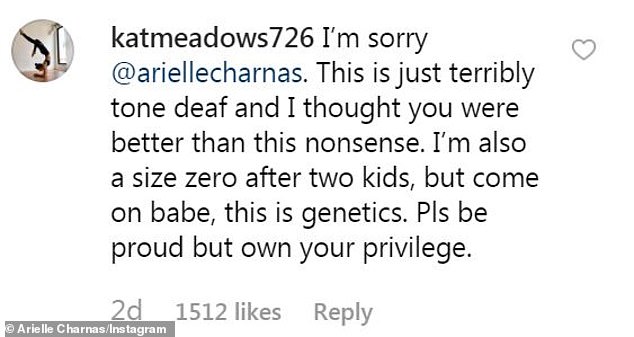 Tone deaf: A number of Charnas’ followers agreed with Seyfried 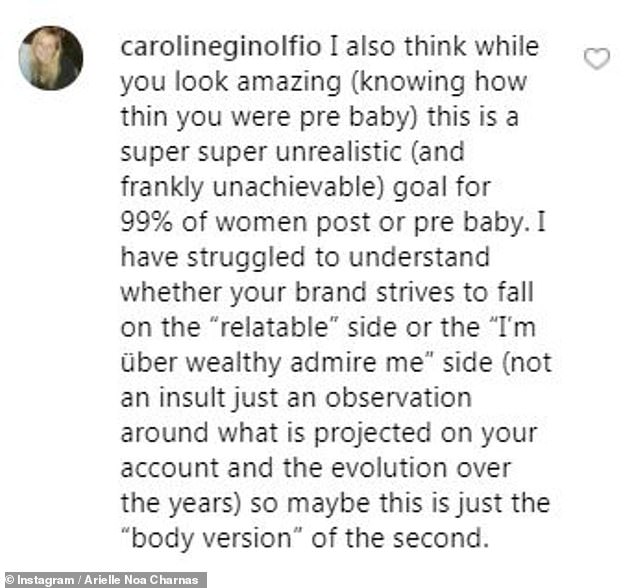 Sophie then replied in a lengthy comment, calling the influencer out for ‘perpetuating the patriarchal (totally unrealistic) notion that mothers should “bounce back” after childbirth’.

‘I hate to dump on you but since you asked,’ Sophie began the comment, which both she and Amanda shared on their own accounts after Arielle blocked her.

‘Totally fine that you’re privileged and thin, good for you (I am too-ish!),’ the comment continued, before Sophie called her out for her lack of awareness when it comes to other mothers’ situations.

‘[Bouncing back] is an impossibility for anyone who can’t afford ample childcare (which is almost everyone in this country),’ she wrote. ‘Honeychild, you are glorifying an unhealthy body image.’

Flack later revealed on her Instagram Stories that Charnas had blocked her on the app after she posted her comments.

So Seyfried, who gave birth to her daughter Nina back in 2017, screenshoted her friend’s comment and posted it to her own Instagram account, writing that she felt Charnas should take responsibility for the message she’s sending.

‘My very smart friend wrote this on a semi-influencer’s feed and she blocked both of us,’ Amanda started, while sharing Sophie’s comment in full. ‘If we’re ready to get paid for flaunting our lifestyle (and inspiring some in the meantime), we have to be open to the discussions surrounding what we are promoting.

‘We have to back ourselves up – not run away from the issues it presents,’ the Mamma Mia star added in her caption. 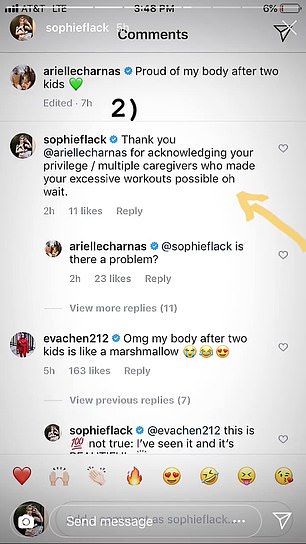 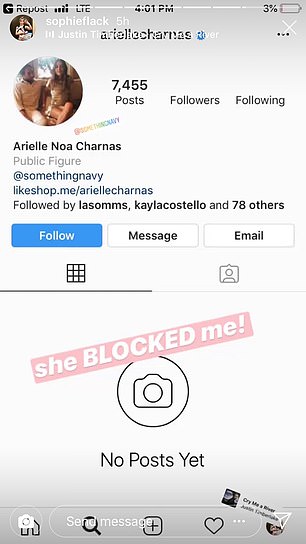 Upset: Mamma Mia star Amanda Seyfriend’s close friend Sophie Flack hit out at Charnas in several comments, and later revealed that the blogger had blocked her as a result 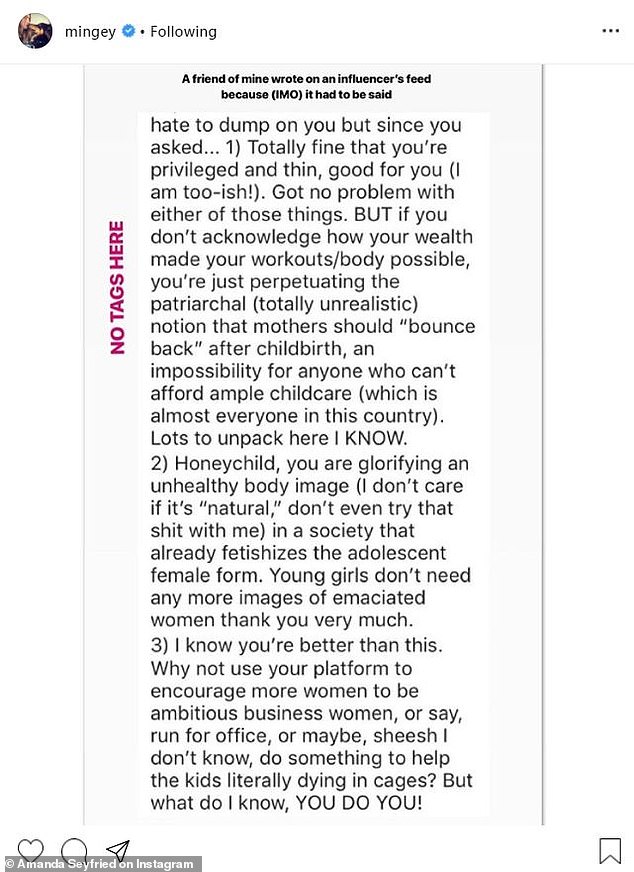 Take responsibility: Seyfried shared a screenshot of a comment that her friend Sophie had left on the image, while also calling the blogger out herself 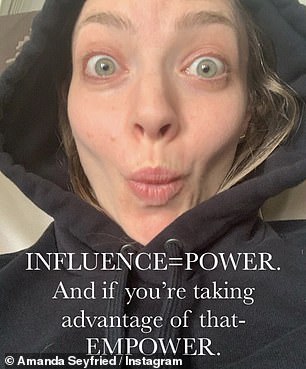 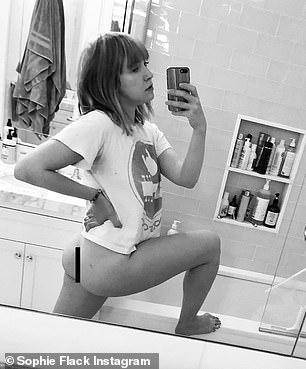 Speaking out: Both Amanda (left) and Sophie (right), who is married to The Good Wife star Josh Charles, hit out at Arielle for promoting an impossible standard of beauty

She followed up with a picture that read, ‘Influence = Power. And if you’re taking advantage of that – empower.’

And the backlash didn’t go unnoticed by Charnas, who later took to her Instagram stories to address the criticism.

‘Why am I being bullied for posting myself in a bathing suit?’ she asked followers, adding, ‘I should be punished because I’m thin and worked hard to be fit after giving birth to two kids? I’m not responsible for making people feel good about themselves.’

And as for Seyfried’s advice about being ‘open to the discussions,’ Charnas said she doesn’t have time for ‘attack[s].’

‘I am healthy and proud of who I am and the body I have. If you are going to attack me for me being me on my own page then you will be blocked, I don’t have time for that,’ Charnas continued.

Her post further addressed the idea that Charnas was only able to achieve her body because of the time she had to go to the gym thanks to her nannies.

‘It also has nothing to do with my body and for random women to tell me I should be crediting [the nannies] for my figure and my “excessive workouts” is actually disgusting,’ she wrote. 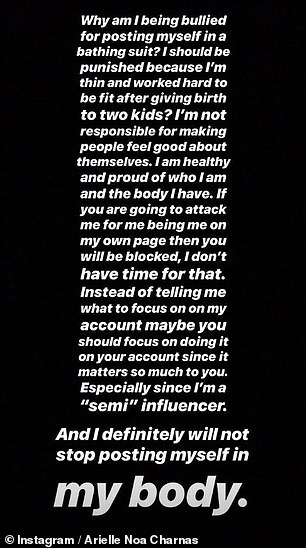 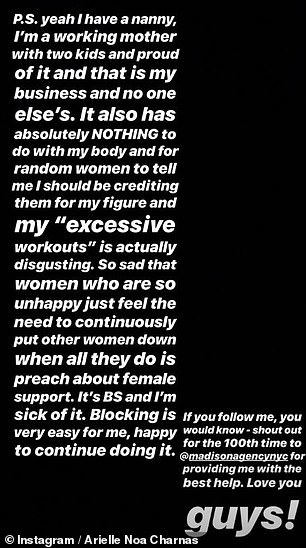 Ain’t nobody got time: Charnas hit back at her critics, and when it came to Seyfried’s advice about being ‘open to the discussions,’ she said she doesn’t have time for ‘attack[s]’

‘So sad that women who are so unhappy just feel the need to continuously put other women down when all they do is preach about female support. It’s BS and I’m sick of it.’

And on Thursday, after a number of back-and-forths, Seyfried seemed to have heard and understood Charnas’ side.

She again took to her social media to apologize, addressing her post to, ‘All who feel bullied or thin-shamed during our recent social media discussion.’

‘If you know me or are familiar with any of my beliefs or stances you’ll recognize that it isn’t in my character to tear down anyone for “being who they are.”

‘As I’m acutely aware, there’s a price tag for the group of people who find themselves with a platform to stand on. You have to be aware of the message you’re sending and be able to back it up when faced with criticism (not just praise). Hold yourselves accountable instead of using the terms above,’ the Mean Girls actress wrote.

She continued on to say that she regretted the negativity that Charnas endured because of her call-out.

‘The only thing I’d take back is exactly how I started this debate. I desperately wish it hadn’t targeted (or blasted) one person (there are MANY who engage in this questionable messaging) and instead started a cleaner, general conversation. No one needs to tear anyone apart. And I regret that it’s present right now. To the lady in question: I’m sorry for the truly negative feels you’ve endured because of this.’ 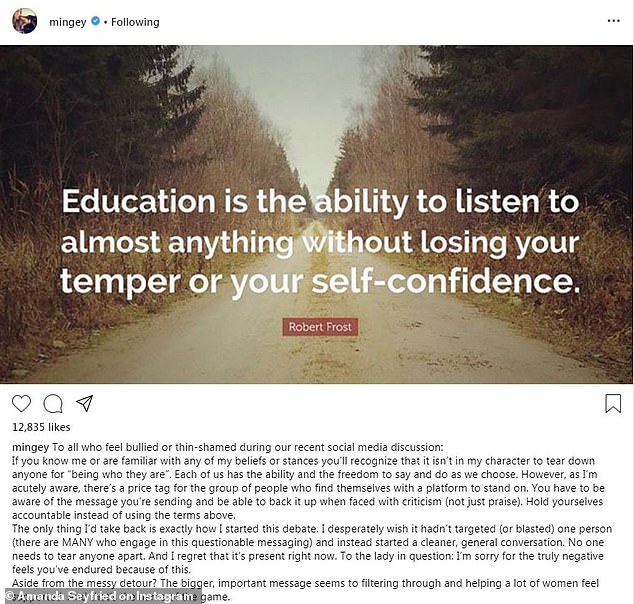 Sorry! The Mean Girls actress again took to her social media to apologize, addressing her post to, ‘All who feel bullied or thin-shamed during our recent social media discussion’