Amanda Holden enjoys a family bike ride with daughters Lexi, 15, and Hollie, 9, as she’s seen for the first time since making 215 mile trip to Cornwall in lockdown

She’s been busy making her 50th birthday one to remember this week after driving 215 miles to Cornwall following a ‘distressing’ call from her parents.

And Amanda Holden was seen for the first time since the dash down south as she enjoyed a bike ride with her husband Chris and their daughters Alexa, who is known as Lexi, 15, and Hollie, nine, on Sunday.

The Britain’s Got Talent judge, 50, looked sensational as she cut a sporty figure in blue patterned leggings and a baseball cap for the exercise session in London. 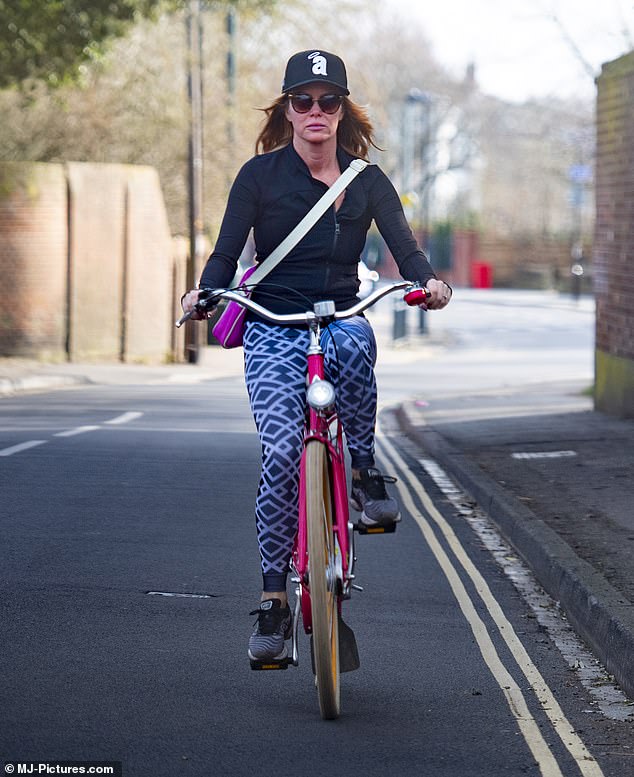 On her bike: Amanda Holden enjoyed a relaxing cycle with her husband Chris and daughters Alexa, 15, and Hollie, nine, in London on Sunday

Amanda appeared deep in concentration as she rode along the quiet road on her bright pink bicycle.

The TV personality showcased her sensational figure in skin-tight leggings which she paired with a black  zip-up jumper and pair of trainers.

She also slung a neon pink handbag with a white strap across her toned torso for the bike ride, completing her sporty look with a pair of sunglasses.

All of the family hopped on their bikes for the weekend cycle, with Alexa wrapping up warm in a red hat and white jumper. 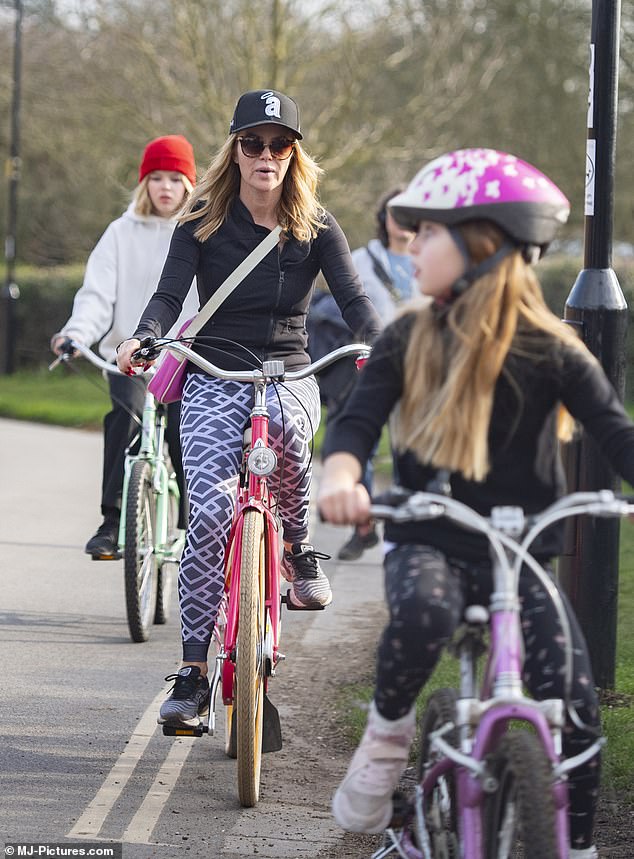 Active: The BGT judge, 50, was joined by her two daughters with them all sporting laid-back ensembles for the outdoor activity

Hollie was the only member of the group to sport a helmet as she made her way along the side of the quiet road on a pink bike.

Amanda’s husband Chris was also seen on his black bike, with him leading his wife and daughters at one point as they turned a corner.

The bike ride comes a week after she was reported to police for making a 215-mile trip from London to Cornwall on February 12 during lockdown.

The BGT  judge went to see her parents after she got a ‘distressing phone call’ from her stepfather Les Collister on the weekend before her 50th birthday. 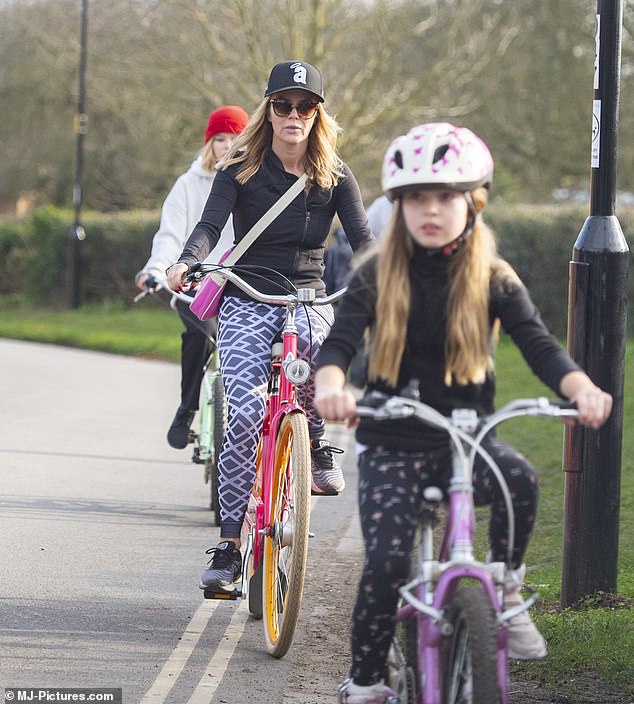 Stand out: Amanda and Hollie boasted pink bikes, with the youngster also donning a helmet 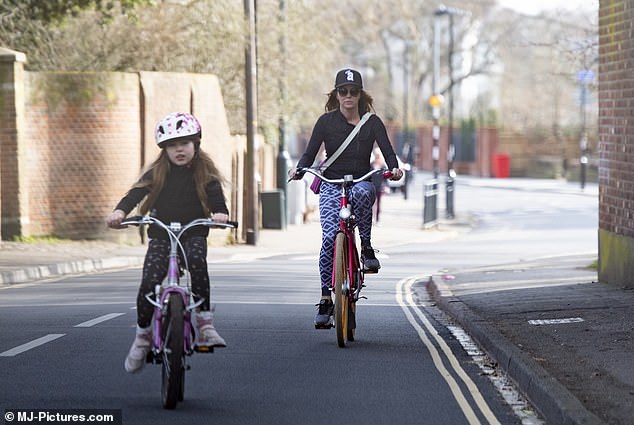 Here they come! The family enjoyed the fresh air as they took a quiet trip out on their bikes

Amanda took a black Mercedes from Richmond to a small hamlet near Bude to see the 75-year-old and her 71-year-old mother Judith on Friday – it is believed she had not seen the pair for a year prior to the visit.

Devon and Cornwall Police had previously warned visitors that they would face a fine for breaking lockdown restrictions but a source has since told The Sun: ‘Officers turned up at [Amanda’s] parents’ this afternoon to ask about the visit.

‘As they left they said this would be the end of the matter.’

Friends of Amanda said although she knew she should not have made the journey, she was so concerned about her parents’ welfare she felt she had no option. 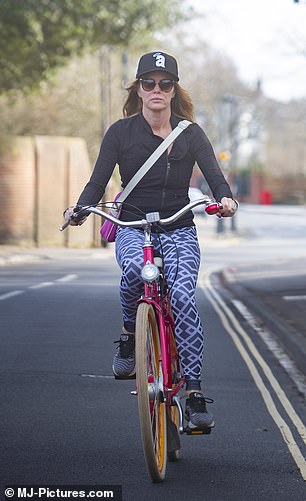 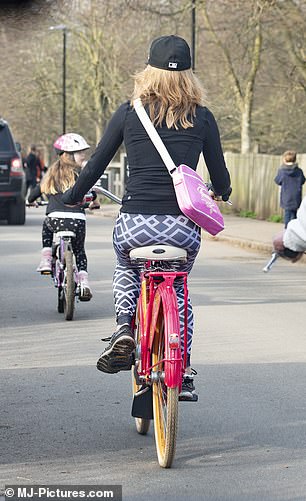 Sporty: Amanda flaunted her toned figure in skin-tight leggings and a zip-up jacket 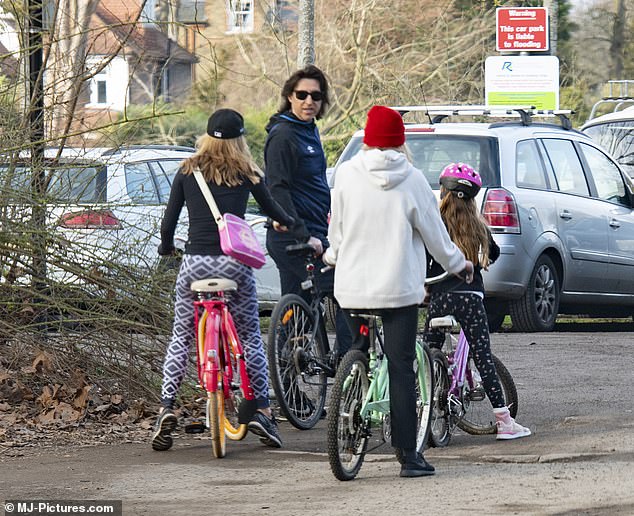 Pit stop: They all paused by a car park with Chris seeming to be updating them on something 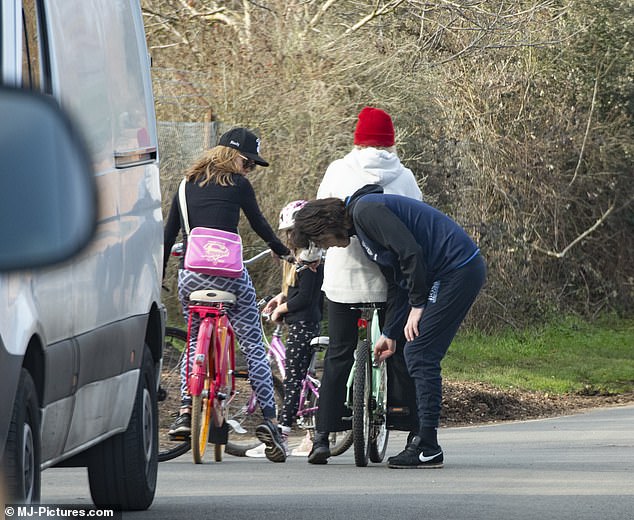 Have a look dad: Chris also inspected Alexa’s bike while they rested at the side of the road

As well as enjoying a bike ride, Amanda also celebrated Everton’s historic victory over Liverpool on Saturday as she enjoyed a kickabout with Hollie in the garden.

After toasting the win with a gin, the star didn’t seem to have a sore head on the Sunday as she played a game of football in her garden.

Amanda took to Instagram to share a clip of Hollie scoring a goal in homage to Gylfi Sigurdsson’s penalty goal.

Amanda was seen sporting the same geometric leggings and a black jacket as she worn on the cycle while guarding the garden archway turned goalpost. 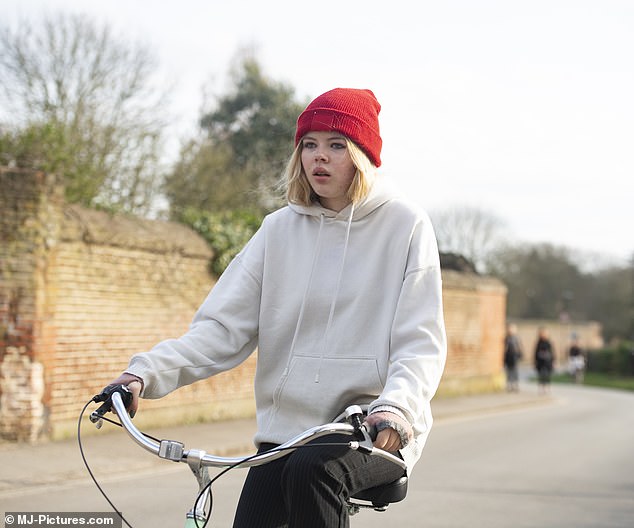 Casual: The teen wrapped up in a red beanie hat and white jumper 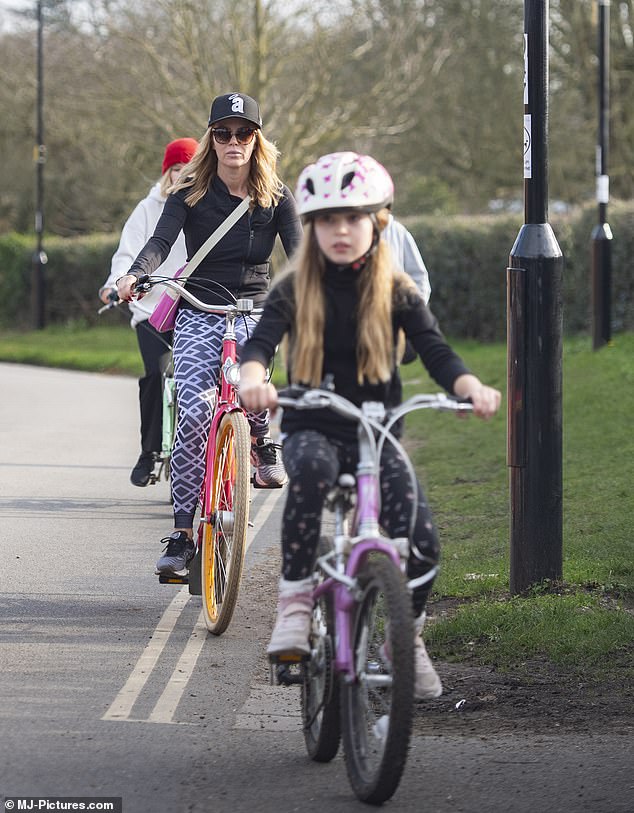 Quality time: Amanda has been celebrating her 50th birthday this week and rounded off celebrations with the lovely family cycling day 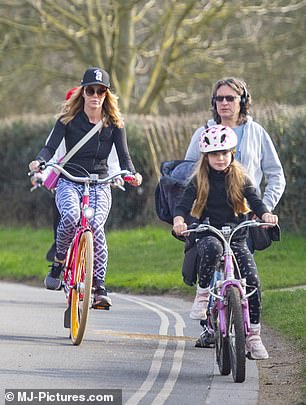 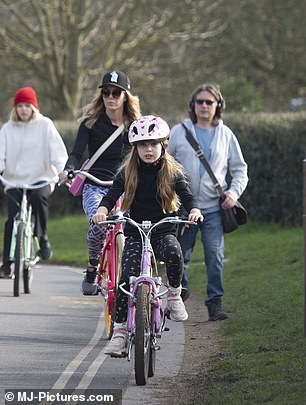 Coming through! The TV star and her daughters easily glided along the road like pros (pictured passing a member of the public) 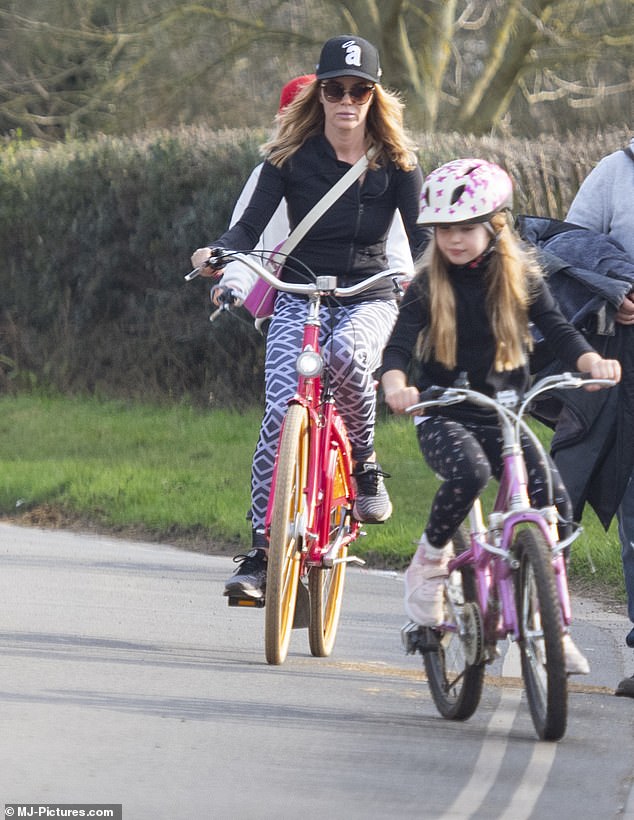 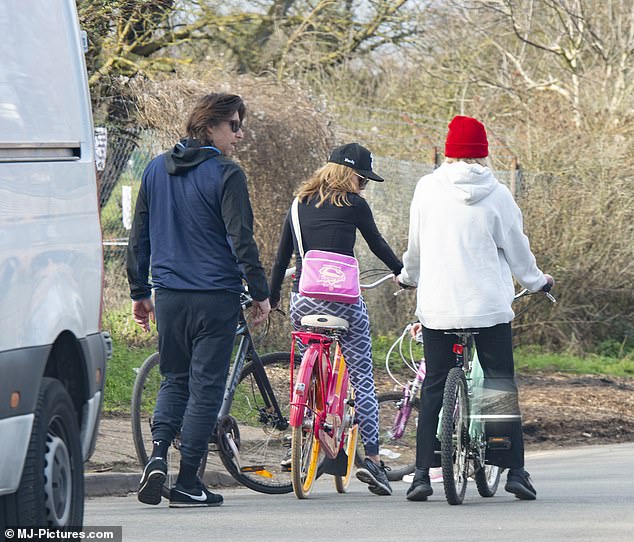 Her blonde tresses were nestled beneath a black baseball cap and she framed her visage with black shades.

Her daughter, who rocked a personalised Everton top, kicked the ball with her welly as Amanda dived to catch it.

However, the TV presenter’s efforts were futile as Hollie scored the goal, followed by her excited pooch who chased the ball.

Gylfi scored from the spot after Dominic Calvert-Lewin was fouled, tallying Everton’s score to 2-0, at Anfield on Saturday, marking the club’s first win at the ground since 1999. 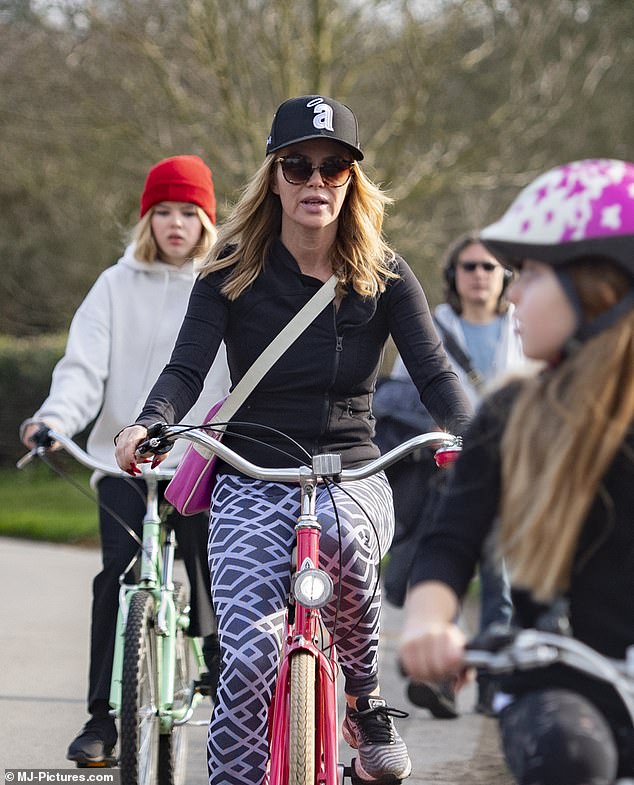 Accessories: She wore sunglasses and a black baseball cap for the cycle 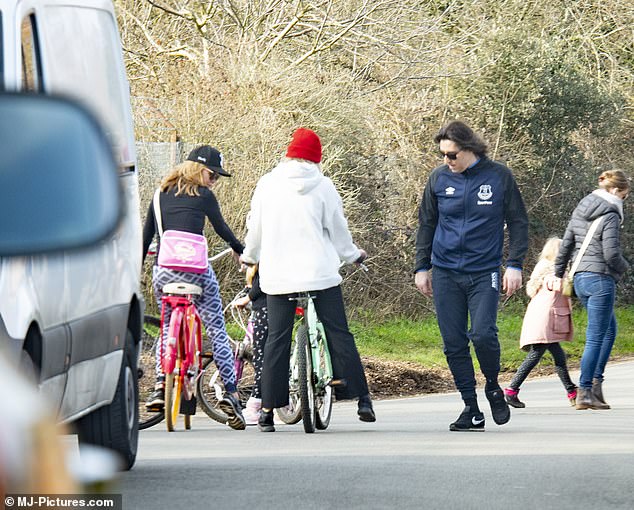 The radio host has long been an Everton fan and has been seen at matches in the past, while she’s also been known to rock the club’s shirt.

It comes after Amanda saw out her 50th with typical aplomb on Tuesday as she took to Instagram to share a snap of her posing naked atop a giant birthday cake.

Looking radiant and bronzed, the mum-of-two wowed as she reclined on the white, tiered structure, biting seductively into a cherry as she revealed her pert posterior.

She wore her golden locks loosely around her shoulders, covering her modesty, and smiled for the occassion, her make-up flawless with a smokey eye and a pink slick to her lips. 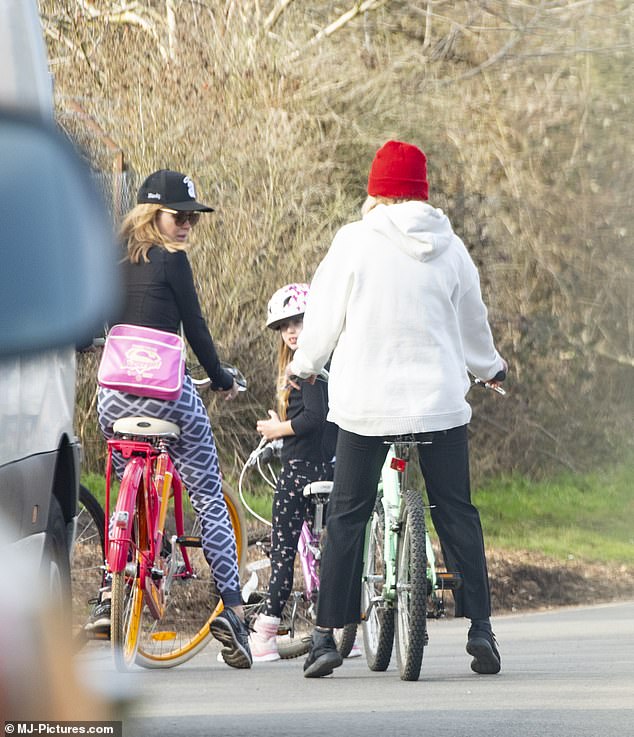 Mum duties: Amanda seemed relaxed as she chatted with her two daughters

She captioned the snap: ‘How did this happen! Half a century… time flies!’

She added: ‘Thank you for all your kind & loving messages today. My husband Chris and my gorgeous girls have spoiled me rotten and it’s still going. 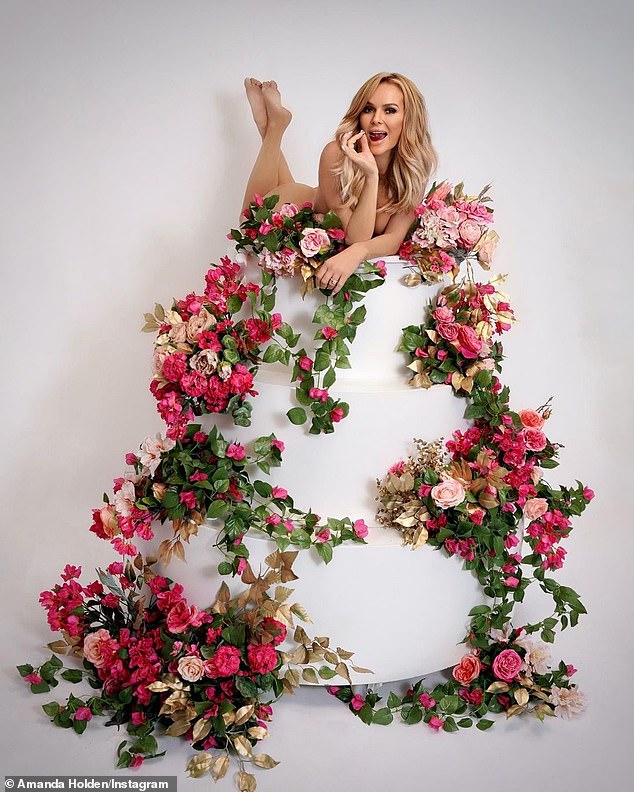 Frisky at Fifty! Amanda was sure to see out her 50th birthday with typical aplomb on Tuesday. The star took to Instagram to share a snap of her posing naked atop a giant birthday cake

Referencing the current UK lockdown forcing all celebrations to be low-key, she added: ‘I can’t wait to celebrate in a HUGE way when we can… I’m 50 all year and all year we’re gonna party. Hang on to your loved ones. It’s nearly over!’

The Heart Radio presenter said she was ‘feeling very spoilt’ by her husband Chris Hughes and daughters Lexi, 15, and Hollie on Tuesday.

While many friends gifted Amanda beautiful bouquets of flowers, Simon Cowell, 61, poked fun at her age by delivering a walking frame.