She’s sparked a flurry of Ofcom complaints with her racy wardrobe choices on Britain’s Got Talent.

And Amanda Holden appeared unfazed by the furore as she left Sunday Brunch TV in London on Sunday.

The singer, 49, looked sensational as she covered up in a chic black jacket with a faux-fur trim. 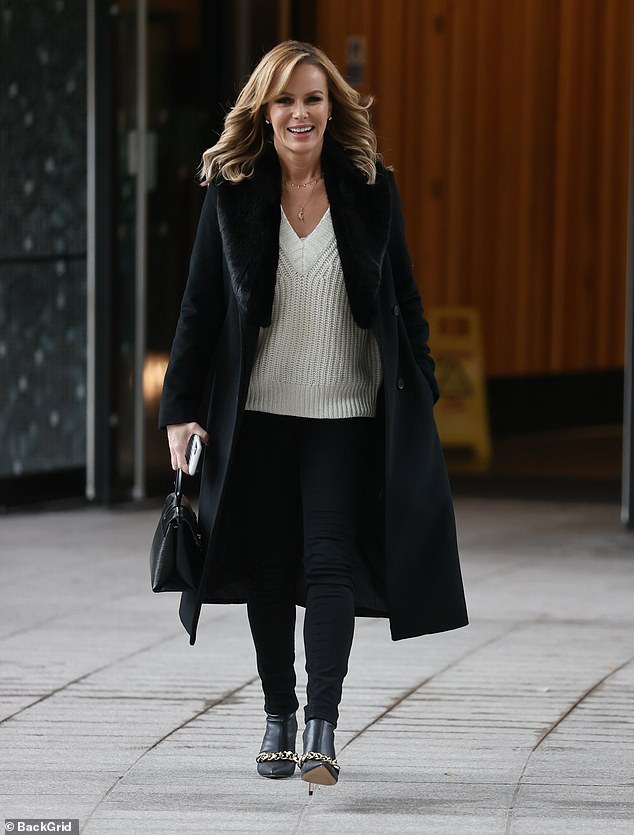 She added some extra height to her toned frame with black pointed-toe ankle boots with a gold chain detail across the front.

The star wore her blonde locks down for the outing, letting her perfectly styled curls bounce over her shoulders.

Amanda’s appearance comes after Britain’s Got Talent fans were left in shock when she stepped out in another daring ensemble during Saturday’s show. 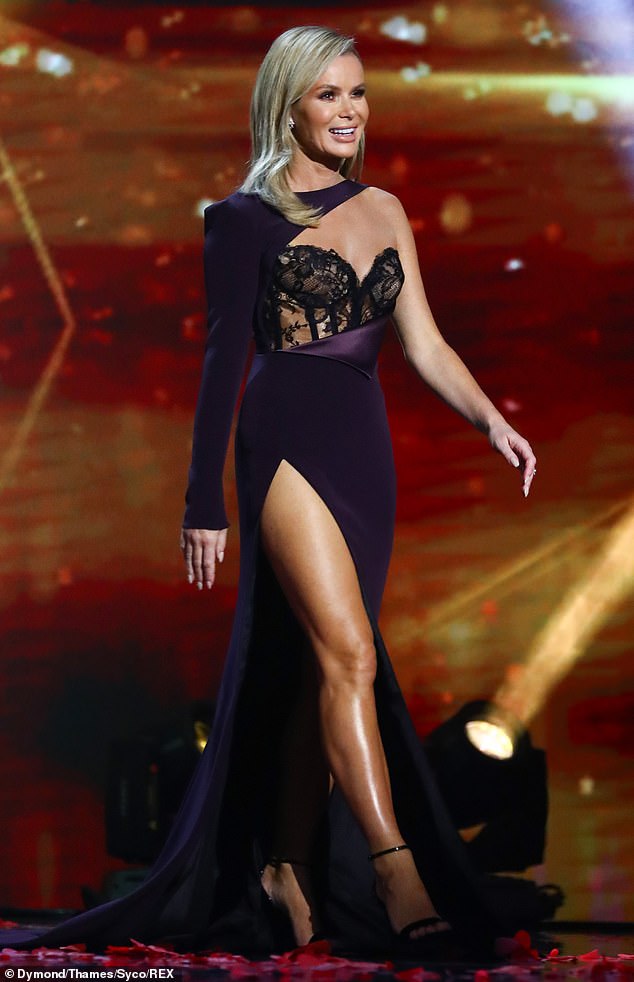 Brave: The BGT judge shocked fans on Saturday night’s show when she stepped out in a daring ensemble after sparking 235 Ofcom complaints over her attire the week before

The TV judge ensured all eyes were on her once again as she taped the fifth semi-final in a head-turning gown with a daring sheer black lace bustier.

Amanda’s racy gown on last week’s show sparked 235 Ofcom complaints and led viewers to question whether she had suffered a wardrobe malfunction.

Choosing not to let the controversy impact her fashion choices, Amanda boldly stepped out in a gown with a perilously high leg split that showcased her sensational figure. 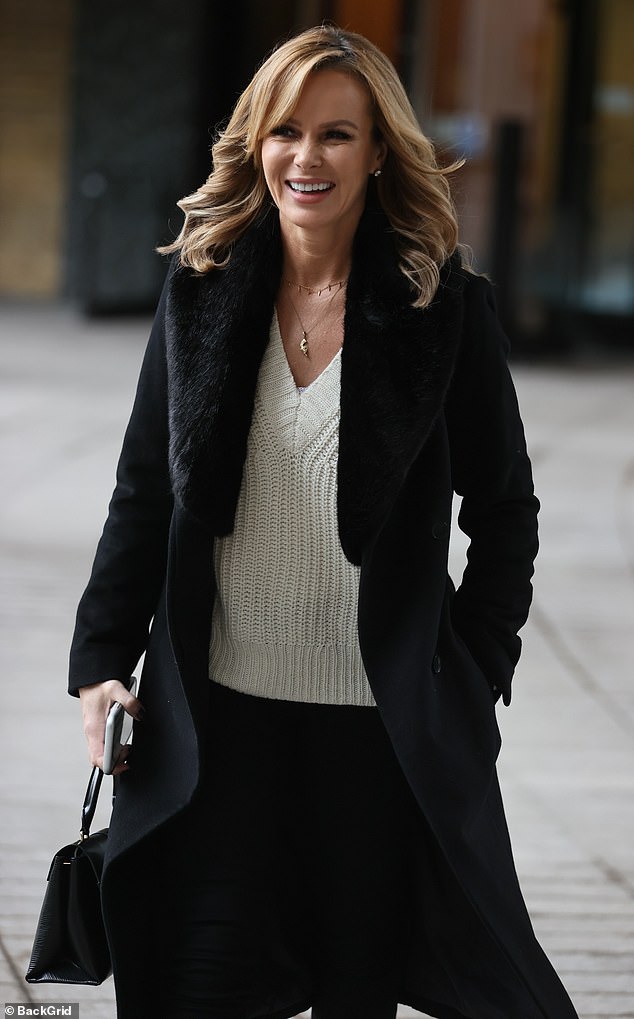 Laughing it off: Amanda appeared to be in good spirits on Sunday despite the recent furore 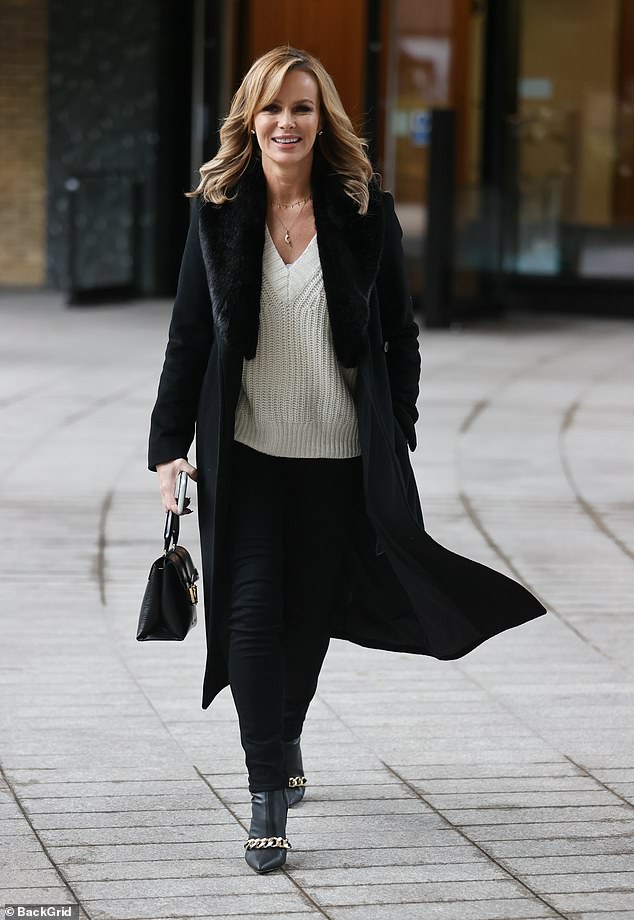 Style: She cut a fashionable figure in a ribbed jumper and black jeans which accentuated her slim frame

The dress had a sweetheart neckline while Amanda added height to her frame with a pair of black, open-toed heels.

Shocked by Amanda’s outfit of choice for the show, some viewers took to Twitter to complain about how inappropriate they thought it was.

One fan said: ‘When has it become acceptable to show your underwear on a family show Amanda Holden?’

While another complained: ‘Does anyone else think a large portion of Amanda’s dress has gone missing..? Don’t they realise kids watch this show.’ 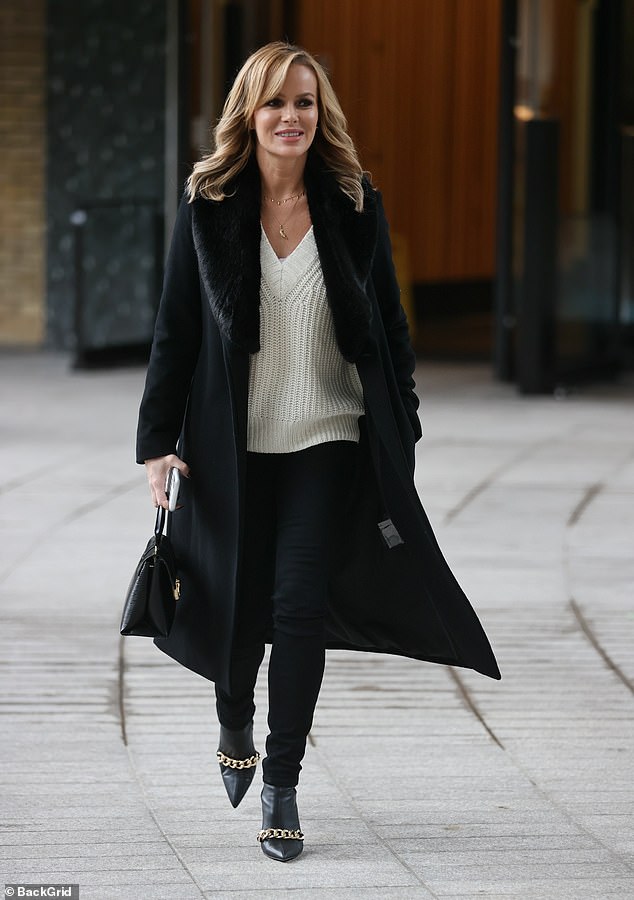 Glam: Amanda wore her blonde locks down and perfectly styled into curls

On Friday, Amanda laughed off the drama about last week’s dress as she spoke exclusively to MailOnline, and joked her breasts need their ‘own representation’.

Discussing the recent furore over her outfit on last Saturday’s show and the 235 Ofcom complaints it has received, Amanda said she has used her ‘sense of humour’ to deal with the backlash.

Following Saturday’s show, some fans claimed on Twitter that Amanda had suffered a nip slip in the look and she took to Instagram at the time to shut down speculation. 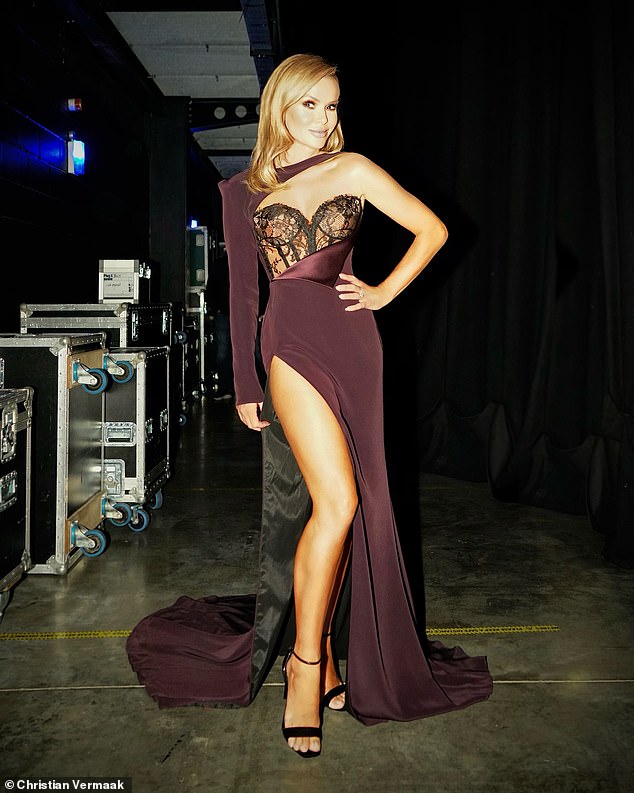 ‘Not again!’ The Britain’s Got Talent judge came under fire from viewers with ANOTHER Ofcom complaint-garnering lingerie gown for semi final on Saturday

In her typically tongue-in-cheek humour, the singer joked to MailOnline that she was more insulted that people thought she had ‘huge saucepan nipples’.

The star explained that she has her own ‘committee’ of people that come down to check on her outfits before a show and she said that her racy gown had passed.

Although being mindful of viewers’ opinions, Amanda admitted that she ‘can see what people think’.

Amanda had worn a plunging navy gown with a daring thigh-high slit which had a built in underwire on the bust. 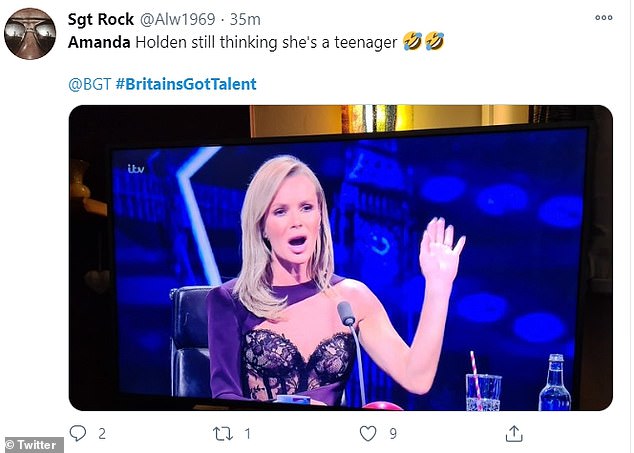 Not impressed: Shocked by Amanda’s outfit of choice for the show, some viewers took to Twitter to complain about how inappropriate they thought it was

The Heart radio presenter said: ‘I can see what people think, it had a like an underwire, you know when you have an underwire bikini or bra, the end of it it’s like an upside down U isn’t it. The end of it dug in.

‘I was more insulted that people thought I had either huge saucepan nipples or nipples over my cleavage.’

Joking about how much attention her breasts and racy ensembles get, Amanda quipped that they need their own representation and will be going on Piers Morgan’s Life Stories.

She said: ‘I am seriously thinking my girls need separate representation to me, because they are known on their own. They don’t need me, they’re going to go off and do Piers Morgan’s Life Stories on their own next year!

‘They’re going to do their own album, they’re bringing out their own autobiography – The Truth Behind The Bra!’ 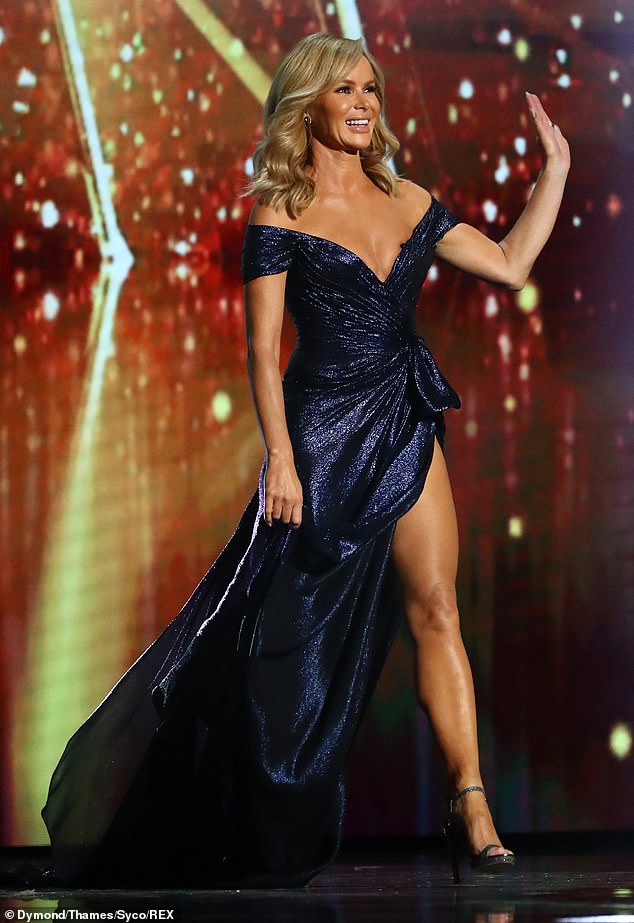 Racy? Amanda had worn a plunging navy gown with a daring thigh-high split and a built in underwire on the bust which sparked complaints from some viewers the previous week