Los Angeles native Amanda Gorman looked regal as she read her beautiful poem, ‘The Hill We Climb,’ which tipped its hat at the hit musical ‘Hamilton.’

Amanda Gorman, 22, has drawn widespread praise for the patriotic and moving poem that she read at the inauguration of President Joe Biden and Vice President Kamala Harris. The Californian took to the podium on Jan. 20 to read her powerful composition with her head high and her delivery flawless.

As the Harvard graduate stood on the steps of the Capitol she made history, becoming the youngest person in modern history to read a poem at a presidential inauguration. Following in the footsteps of giants like the late Maya Angelou (who spoke at President Bill Clinton’s 1993 inauguration), she focused on unity and faith overcoming division. 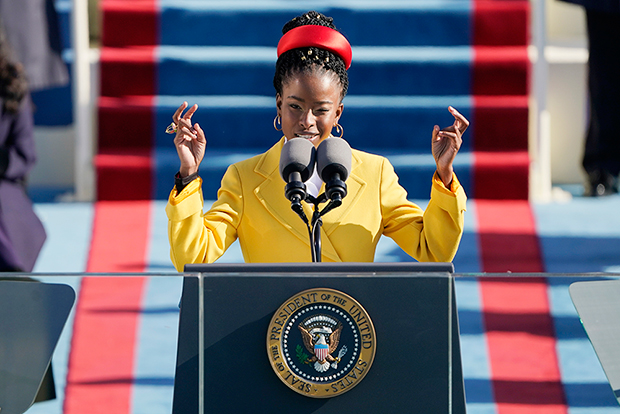 And, just as she indicated in a Jan. 19 interview with The New York Times, the National Youth Poet Laureate refused to “gloss over” the insurrection that took place in Washington D.C. just two weeks earlier when MAGA-supporting rioters stormed the Capitol building.

In an excerpt from The Hill We Climb (which you can see her recite in full in the video above), she said:

“We’ve seen a force that would shatter our nation rather than share it,

Would destroy our country if it meant delaying democracy.

And this effort very nearly succeeded.

But while democracy can be periodically delayed,

It can never be permanently defeated.

In this truth, in this faith, we trust.

For while we have our eyes on the future,

history has its eyes on us.”

It was a soaring poem that left Hamilton fans in a frenzy after she referred to the Broadway smash hit on more than one occasion. “Loved the ‘History has its eyes on you’ nod,” CNN’s Dana Bash tweeted moments afterwards.

“So much to love about poet Amanda Gorman, age 22. I’m struck by her echoing lines from the Bible and the musical Hamilton: ‘Sit under our own vine and fig tree.’ ‘History has its eyes on you,’” Fordham University law professor, Jed Shugerman, tweeted. “A thread connecting Old Testament to 1776 & 1787 to our modern diverse America.”

In fact the star and Hamilton creator, Lin-Manuel Miranda heaped praise on the young poet who, like President Biden, suffered from a stutter when she was younger. “You were perfect. Perfectly written, perfectly delivered. Every bit of it. Brava! -LMM,” he tweeted at the poet after she confessed to him that she “couldn’t help” herself by including Hamilton references.

In another touching moment during her poem, Gorman recognized her background and the magnitude of the moment coming together. As she stood before the first African-American, South Asian, female Vice President, she noted her own historic role. Calling herself a “skinny Black girl descended from slaves and raised by a single mother” who “can dream of becoming president, only to find herself reciting for one.” Watch Gorman recite The Hill We Climb, in full, above.