She’s not such an easy lover! Orianne Cevey is the wife Phil Collins paid £25m to divorce… before they got back together. Now it’s all over again – and he is trying to evict her from their Miami mansion, writes ALISON BOSHOFF

Their reunion was a love story which – to borrow a phrase – was against all odds.

Even their children were stunned when Phil Collins and Orianne Cevey announced in late 2015 they were going to give their romance another go.

The couple had divorced in 2008 – at a cost of £25million to Collins, a record amount at the time. He then slumped into post-split binge drinking sessions, which proved almost fatal. Orianne went on to marry again, but as soon as that marriage ended, she and Collins were reunited.

There was even talk that Collins – then a frail figure who walked with a stick since he dislocated vertebrae in his neck while performing in the Genesis reunion tour in 2007 – might go so far as to remarry the bling-loving Swiss glamour puss, 23 years his junior.

She purred that she already thought of them as married in any case.

‘I now call Phil my husband again,’ she said. ‘We are so close that it does not actually make a difference if we are married or not, but we are determined to get married for a second time one day.’

However, it’s emerged their romance has yet again collapsed – acrimoniously.

Orianne, 46, an effervescent presence on the Miami social scene, all diamonds, handbags and designer labels, is living at their £25million waterside mansion.

She is said to have changed all the security codes. Collins, 69, is now poised to launch a legal eviction notice against her today, having set a deadline for her to leave of 3pm last Friday.

Quite extraordinarily, she is said to have married another man this August after her romance with Collins ran out of steam during lockdown. It is reported that she tied the knot with one Thomas Bates in Las Vegas, after telling Collins that she was leaving town ‘on business.’ 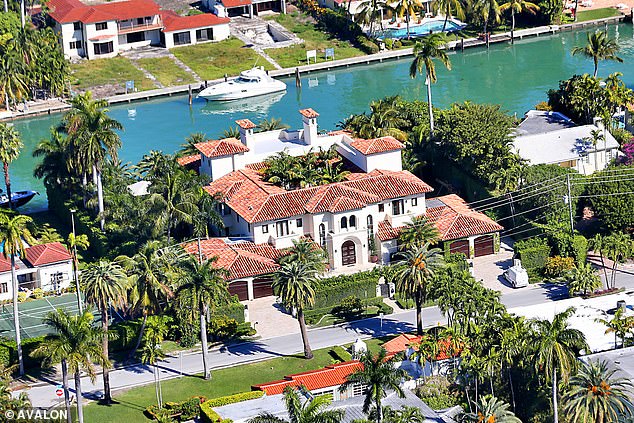 Orianne, 46, an effervescent presence on the Miami social scene, all diamonds, handbags and designer labels, is living at their £25million waterside mansion

She is reportedly asking for more money on top of their 2008 divorce deal before she quits the house – but pals of drummer and singer Collins, who is worth £130million, have said that he doesn’t want to give her a solitary dime.

She is also said to have threatened to release personal details about Collins.

Her lawyer, Frank Maister, yesterday confirmed legal action was under way. He told me: ‘We will deal with Mr Collins in the courthouse, not the gossip column.’

But what can have gone wrong?

Throughout the spring and early summer, the couple have been continuing to jointly support their charity, the Little Dreams Foundation. She referred to herself as ‘Orianne Collins’ in an interview to a local newspaper. 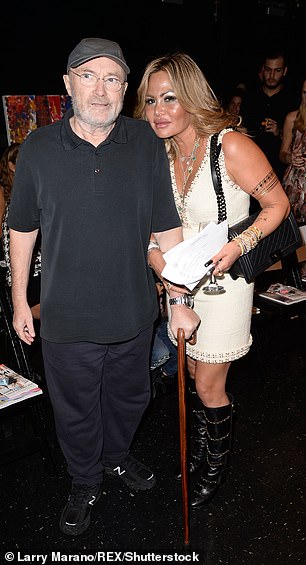 The couple had divorced in 2008 – at a cost of £25million to Collins, a record amount at the time

However one close associate of Collins who has recently spent time with him tells me: ‘He has been doing every single thing possible in his heart and soul to make it work with her.

‘As recently as last year he was fully devoted to her. He called their romance his ‘last relationship’. It was his intention that this was for ever.

‘There were some people on his team who were really sceptical about her motives. But he is a very loyal person and just wanted to give it a clear shot.’

It seems, though, that there were insurmountable issues in the relationship from the moment that they started picking up the threads again in 2015.

The most obvious of these is what on earth is one of pop’s most quiet and retiring senior figures doing in America’s buzzing nightlife capital, most famous for cocaine and conspicuous consumption?

Orianne had moved to Miami in 2011 with her second husband, businessman Charles Mejjati, and the children. They had another boy together, and lived in a £7million house.

Collins had struggled to be apart from the kids, who had been living just ten minutes away from him in Switzerland but were now a ten-hour flight away.

After missing out on much of the upbringing of his older children while touring – he has two children, Joely and Simon, in their 40s, from his first marriage, and a daughter, actress Lily Collins, from his marriage to Jill Tavelman – he hated the thought of being absent again.

Meanwhile, Orianne had surgery on trapped nerves in her back and it went disastrously wrong, leaving her temporarily paralysed and in a wheelchair.

Collins flew out to Miami to support her in her recovery. He was one of her first visitors.

At the same time, her marriage to Mejjati began to disintegrate. In court papers, Mejjati said that Orianne had thrown him over for Collins when it became clear that a reconciliation was possible.

In June 2015, Collins bought a Miami mansion which previously belonged to Jennifer Lopez. The 12,000-acre property has a dock and views over Biscayne Bay.

Orianne would swim in the large pool, her son Andreas, now nine, also moved in and called Collins ‘Mr Phil’. By the end of that summer he and Orianne were an item again and she and Mejjati began divorce proceedings.

In January 2016, Collins commented: ‘We went back because we realised we had made a mistake. A lot of people don’t have that chance, or don’t give themselves that chance. 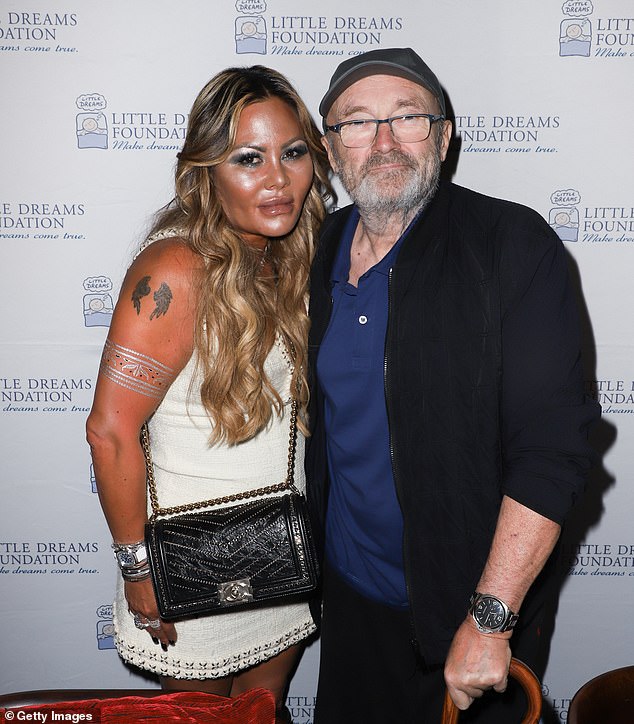 He then slumped into post-split binge drinking sessions, which proved almost fatal. Orianne went on to marry again, but as soon as that marriage ended, she and Collins were reunited

‘Our young sons Matthew and Nicholas are like a dog with two tails. I mean, they’re just so happy. They’ve got their mum and dad back together, so it’s a good place to be at the moment.’

Hounslow-born Collins was, though, never at home in Miami.

‘I don’t like Miami particularly,’ he sighed that year. ‘I live here because the children are here and I go wherever they go.’

The pair lived very different lives too: ‘She goes out and does stuff with her girlfriends. I can’t be doing with all that.

He’s in poor health too, with type-2 diabetes, deaf in one left ear after decades of touring, and nerve damage incurred during an operation has left him with a condition called foot-drop.

This makes it difficult to stand up, much less walk. He also has nerve damage in his hands, leaving him unable to play the drums.

Collins rarely drinks after a late-life brush with alcohol abuse which nearly killed him.

He ended up in intensive care with acute pancreatitis after vodka binges. One time he was holidaying on the Turks and Caicos Islands with his sons and drank so much he had to be airlifted to New York.

Orianne and Collins met in 1994 when she was 21 and he was 44. He was in the process of splitting bitterly from second wife Jill Tavelman – he infamously sent her a fax expressing his fury over custody and access arrangements – and Orianne was hired to translate for him on a European tour.

They were married in 1999 and settled in the village of Begnins, Switzerland. But within 15 months of their second son’s arrival in December 2004, it was over. Collins later admitted he was ‘a bit of a bastard’ to Orianne when she suffered postnatal depression after the birth of Matthew. Orianne left – although she still owns the £45million former marital home.

Single again, Collins unravelled: ‘I’d wake up, turn the TV on and have a glass of wine. I spent way too much time horizontal. It started to be bad for my body.’

After treatment, he stopped drinking alcohol entirely for three years. Now he has no more than the occasional glass of wine.

It seems that there was always a hankering after Orianne. He said in 2010: ‘I’d rather still be married and I think Orianne feels the same. Orianne and I still love each other and I don’t actually know why we got divorced.’

She believed that their second time would see them together forever. She said: ‘It’s different this time. When you first fall in love there is passion and excitement. But the second time around it’s more thoughtful, more mature.’

And yet here they are again. It seems the frail Phil Collins will soon be adding heartache to his long list of ailments.