Surely there’s never been a Strictly exit interview quite like the emotional one given by Dan Walker last night.

Married Walker, 44, the BBC Breakfast host known for his gentlemanly demeanour, unshakeable niceness and strong Christian faith, was voted off after a tepid tango in the quarter finals.

Before he departed, Dan paid an intense tribute to his professional dance partner Nadiya Bychkova, the show’s lissome 32-year-old sex bomb with whom he has developed an unlikely bond.

‘I want to mention this amazing woman next to me,’ gushed Dan. ‘There are some people who walk into your life and turn some lights on, and that’s what she has done to me. You’re an amazing person, and if you’ll have me, you’ll have a friend for life Nadiya Bychkova.’

Before he departed, Dan paid an intense tribute to his professional dance partner Nadiya Bychkova, the show’s lissome 32-year-old sex bomb with whom he has developed an unlikely bond

He added: ‘The past 11 weeks have been absolutely amazing, I’ve genuinely loved every second of it.

‘When I go back to the first day when I was asked to dance in front of some glitterballs, at that point, if there had been a fire exit, I’d have just walked away.

‘But this amazing woman grabbed me by the hand, and brought me out on to this dance floor. I’m not a dancer, but she showed me that I can dance and that for me has been an absolutely incredible experience.’

Indeed, only last week Dan told the Daily Mail that his wife Sarah was ‘amazed’ that he had made it to the quarter final.

Asked if she had any words for Dan, Nadiya replied: ‘Like he said, sometimes the right person walks into your life at the right time and that’s what happened.

‘You always encourage everyone, you always have time for everyone, it just inspires me to be a better person myself. Thank you.’ 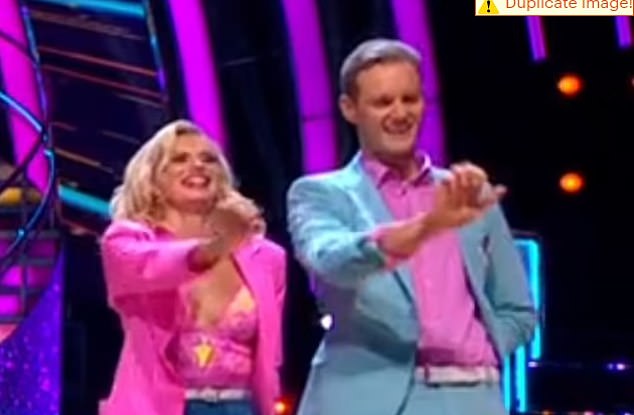 Dan – who lost the dance-off to TV host AJ Odudu and her partner Kai Widdrington – was later seen backstage weeping on Nadiya’s shoulder as she comforted him.

And she was pictured being driven away from Elstree studios in floods of tears after their fairytale run on the show ended.

Nadiya, who posed nude for Slovenian Playboy in 2015, was also seen wiping away Dan’s tears in rehearsals last month on the occasion of the anniversary of footballer Gary Speed’s death. The men had been friends and he recorded a TV show with him the day before his suicide in 2011.

But how did this emotional bond between Dan and Nadiya develop? From week one, they formed a jovial friendship. Dan, who has been married to his university sweetheart Sarah for 20 years, posted a stream of pictures and videos of himself and Nadiya on social media – often larking around in the bar of the hotel where she has been staying while training him.

The two have also been seen dining in Manchester and Sheffield, where Dan lives with Sarah and their three children, after working on Strictly routines. 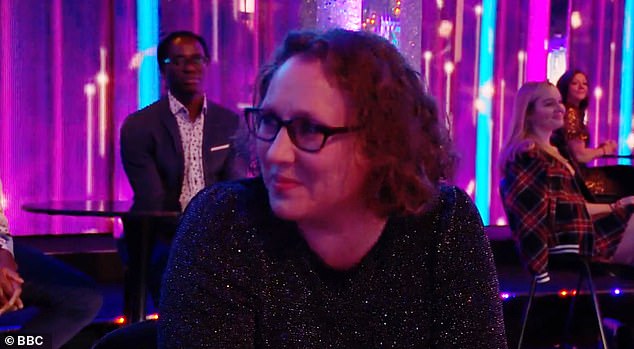 Nadiya, who called Dan a ‘superhero’ for picking up routines quickly, has a three-year-old daughter with her partner, Slovenian footballer Matija Skarabot. Dan took Nadiya’s mother and daughter out for dinner earlier in the series in London.

At every opportunity, Dan’s been urging people to vote for him – enthusing about his new love of dance and the transformative power of the Strictly journey in a way which has given rise to plenty of carping about unfair BBC bias as well as gossip about his on-screen chemistry with his dance teacher.

What is certain is that Nadiya may have been his secret weapon all along, with leaked figures showing that the partnership managed to attract between 10 and 15 per cent of the public vote most weeks, despite Dan being one of the weaker dancers.

He may believe that female viewers have been inspired by his dancing, and there are various groups on social media who have tried to vote him into the final.

But others may conclude that all eyes have been on the mesmerising Nadiya, who besides her talent has looked nothing short of stunning in every costume. She has a considerable fanbase, with 120,000 followers on Instagram and a popular annual calendar which features her mostly in underwear.

Despite some low marks initially, until this weekend the couple had never been in a dance-off – indicating strong public support. Alas, it’s over now, with Miss Odudu going into the semi-final to take on Bake Off star John Whaite, CBBC host Rhys Stephenson and EastEnders actress Rose Ayling-Ellis.

With his BBC commitments, and refusal to work on the Sabbath, Dan won’t go on the Strictly tour in January so there’s little prospect of a reunion. And come August, Nadiya will swirl into the arms of another celebrity contestant.