Yes, I’ve found someone like you: The similarities are uncanny – poor upbringing, living above a shop, addict parent… ALISON BOSHOFF on why, for the new £213m power couple, Adele’s greatest hit could not be more apt

They are Hollywood’s hottest and newest power couple — worth more than £200 million between them and living in separate Beverly Hills mansions a stone’s throw apart.

Singer Adele went ‘Instagram official’ with her sports agent boyfriend Rich Paul on Sunday, sharing a picture of the two of them together with a simple ‘❤’ emoji. They have been dating since May.

She was his plus-one at the LA wedding of his client and friend Anthony Davis, a National Basketball Association star, on Saturday and put on a serious display of economic clout by showing up in a £50,000 Schiaparelli haute couture dress. He wore a velvet tuxedo.

Friends on his side have briefed that ‘it’s not super serious’ between the two of them. However, those on her side say that she is exceptionally enthusiastic about Paul. 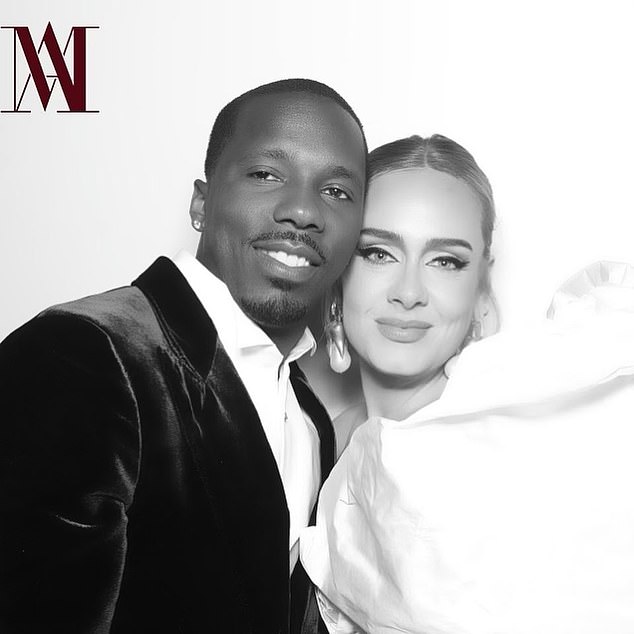 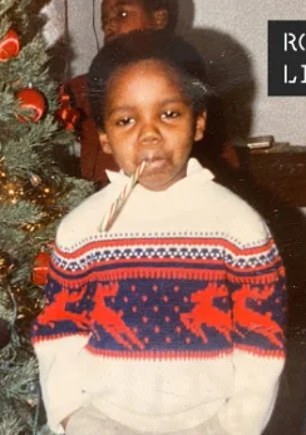 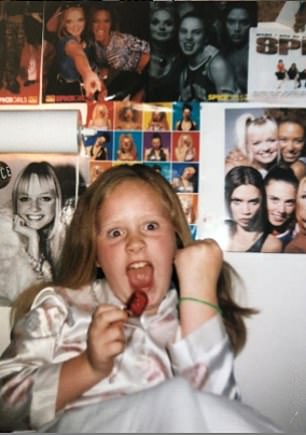 Friends on his side have briefed that ‘it’s not super serious’ between the two of them. However, those on her side say that she is exceptionally enthusiastic about Paul. Pictured: A young Rich Paul (left) and Adele (right)

‘She says he really ‘gets her’,’ says one. ‘Like her, he grew up with nothing, eating McDonald’s and going to chicken shops. This is nothing like her romance with Simon Konecki. Also, she finds him very, very attractive.’

Paul does indeed seem to be someone like her.

Both were raised above shops — he in Cleveland, Ohio; she in South London. Both had a parent with addictions.

Adele was raised by her mother Penny, and her late father Mark Evans was an alcoholic. Paul’s mother was a drug addict and, as a result, he was raised chiefly by his father and other relatives.

Both have enjoyed stupendous success and, in both cases, they hit the big time when they were still teenagers. And both have also discarded the partners who were there for their rise to fame.

Meanwhile Adele, 33, split from Simon Konecki — an Old Etonian who runs a charity having started out in banking — in 2019.

They were married in May 2018, at a celebration thought to have been held for her 30th birthday, having been together for five years and share son Angelo, eight.

The divorce was conducted with the aid of mediators and, although the details of the settlement remain confidential, neither side is paying spousal support.

She has bought a new house just over the street from the old marital home, where Konecki lives, and has redecorated.

She’s also undergone a complete physical transformation, losing around four stone in weight. A new, younger crowd of friends has come to the fore, including actor Aaron Paul and his wife, and she has dabbled in self help and spirituality.

She also went to see a life coach, who advised her to find herself and be happy before trying to enter a relationship.

She was apparently told to ‘surprise herself every day’ and also to let go of people who knew the old her or who thought they did — because that’s not who she is any more.

Adele and Paul have lots of friends in common. Chief among them are married multi-millionaire music superstars Jay-Z and Beyonce, and Canadian singer Drake.

In fact, there is speculation that Drake is the one who played Cupid: he’s been friends with Paul and his family for at least five years and he and Adele are also close pals, too — she went to his recent birthday party.

It seems possible also that Paul and Adele first met at the private Oscars party which Adele attended this April.

There, she and around 100 others celebrated Daniel Kaluuya’s Oscar win, with no sign of masks or social distancing. Drake was certainly there that night. 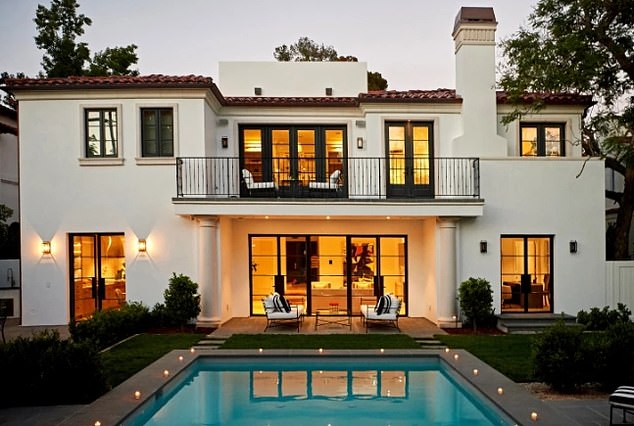 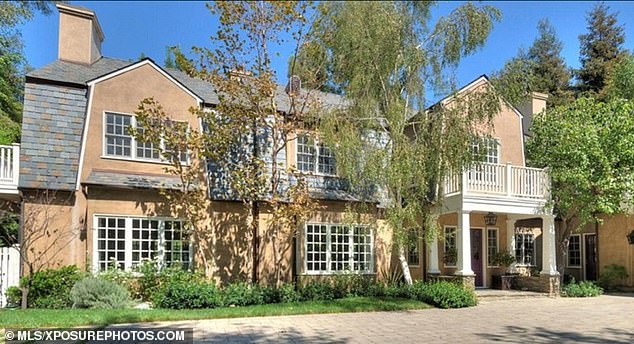 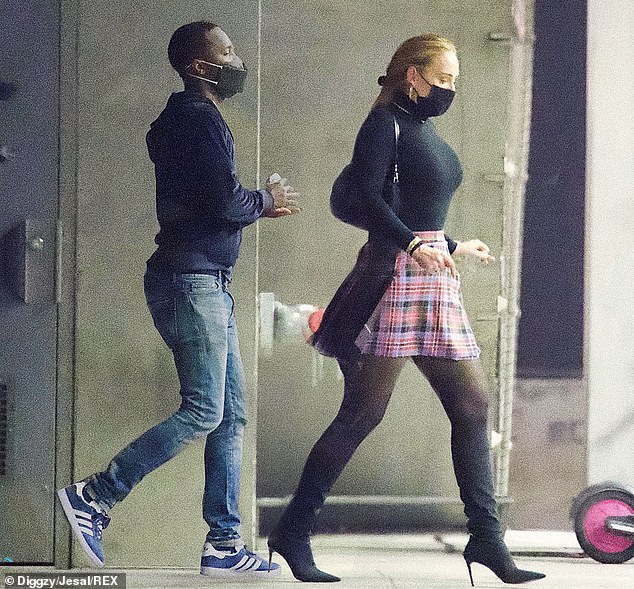 Both were raised above shops — he in Cleveland, Ohio; she in South London. Both had a parent with addictions

By May, Paul — worth £73 million to Adele’s £140 million — was being profiled by the New Yorker magazine.

He told a friend: ‘She was over yesterday… hanging out’ and then mentioned Adele’s name but told the interviewer not to use it. He went on: ‘I’m not dating, I’m single. Put that in the story.’

They were first seen in public in July, sitting together at the NBA Finals. Two weeks later, they were together at an 80th birthday party for billionaire Robert Kraft — a contact of Paul’s, he owns the New England Patriots football team.

By August, they were having dinner together at Olivetta restaurant in Los Angeles with some of his friends.

Again, she was his plus-one at a party at the end of August for basketball player LeBron James’ wife Savannah.

A friend said: ‘They act like they are getting more serious. She is having fun dating Rich. They spend a lot of time together.’ It’s quite a change from the reclusive Adele who took such fright after a dose of global fame.

A source told People magazine this summer: ‘She’s having fun and being social.’ The source added: ‘She has relaxed a lot. She’s not quite as private as when she was married.’

Indeed, we can expect to see more of Adele in the next few weeks as she is about to finally release her much delayed and much anticipated fourth album in time for Christmas and will conduct numerous media appearances.

The new record is expected to reflect her feelings over the split from Konecki — apparently much more in the vein of Gloria Gaynor’s I Will Survive than the lachrymose Someone Like You.

It will also reflect Adele’s enthusiasm for much more modern musical forms — she is massively into grime and rap.

So who is the man at her side during this reinvention?

A London friend says: ‘She always loved a bit of a bad boy in her younger days — like the guy who inspired the second album. Apparently, this guy reminds her of him but a ‘sorted, grown up’ version.’

The friend added: ‘She thinks he gets her. One of the reasons her relationship with Simon broke down was that he was nothing like her. He didn’t quite get where she came from and he had a privileged upbringing.

‘She thinks Rich is properly smart and loves his stories about his past which he apparently is given to telling in very funny anecdotes.’

One of four children, Paul was raised in Cleveland, Ohio, where his father Rich Senior owned a corner store, R & J Confectionery. His father was a serious, business-orientated man.

His mother, Peaches, was an addict. Growing up, he wanted to be an athlete. He studied every element of the NBA and played in the local leagues, but he was too small to keep going — ‘Little Rich’ ended up 5ft 9in.

At ten, the situation at home was grave and he went to live with his grandmother and a great-uncle, in a house several blocks away.

He said of his mother: ‘I was never really angry, but I was definitely protective, and I was definitely sad in a lot of ways. Because, as a kid, you see other kids and their experience with their parents, and you want the same.’

As a teen, his father sent him to a Benedictine Roman Catholic High School, figuring it would give him a better education and keep him out of the crime-ridden environs of the family shop.

He had started college at the University of Akron when his father was diagnosed with intestinal cancer. He moved to be closer to him, and dropped out of college altogether after his father died.

His uncle, John Paul Jr, said: ‘Little Richard was always at the grocery store with his dad, mingling with the customers. From a very young age he learned how to deal with people.

‘You could see this kid was going to be something. He was entrepreneurial from a very early age. He liked to be his own boss.’

He began selling vintage sports shirts out of the boot of his car and then, in 2002, fate took a hand. He bumped into basketball superstar LeBron James, then 17, at an airport on the way to Atlanta.

LeBron was intrigued by the replica sports shirt Rich was wearing and Paul gave the sportsman the name of his supplier in Atlanta.

More importantly, they became friends, talking about ‘basketball, football, and the greatest that have ever played the game. And then just about being a black kid growing up in the inner city, and the struggles that come with that,’ said Paul.

L eBron, 36, said: ‘We hit it off instantly. Every time I was doing something I’d call Rich and ask if he can make it. And he’d say, ‘I’ll be right there’, and he was.

‘He had all these life skills that he got from his dad and pretty soon I had all these people ask me, ‘Why do you have this Cleveland guy around?’

He hired him onto his staff in 2003. Paul said: ‘He told me that he really didn’t have a job for me but that he wanted me close and we’d figure it out.’

He has now become one of LeBron’s key crew known as the ‘Four Horsemen’ — with a signature handshake and silhouette of a knight on their trainers.

He worked for a time for the mega agency CAA but said: ‘I learned nothing. Because there was no investment in me for me to learn anything. There was no plan. I used my personal skill set that I grew up with for these opportunities.’

He went on to found his own business, Klutch, and has done more than $2 billion of deals for his clients.

He has become known for championing player power, at times controversially. Not everyone is a fan — but Paul blames racism for the criticisms.

He has an ability to not be afraid and not back away from a tough conversation, because of the way he grew up, in part from having a father who died at a young age and having a mother who was a drug addict.’

Brian Windhorst, a reporter for U.S. cable sports channel ESPN, says: ‘The burden that Rich faces is that people question his legitimacy. They want to delegitimise him because of his race, because of his lack of education, because he used to sell jerseys out of the trunk of his car. If that’s the best they can do, they have to do a lot better.

‘Rich may have been pulled up on his feet by LeBron, but he grew his own wings.’