The moment you’ve been waiting/thirsting for has arrived: A$AP Rocky just confirmed that he and Rihanna are 100 percent dating. Rocky spoke about the relationship for the first time in an interview with GQ, calling Rihanna “The love of my life,” and “My lady.”

He didn’t divulge too many details, but did say it’s “so much better” to be in a relationship, noting “So much better when you got the One. She amounts to probably, like, a million of the other ones.” He also noted, “I think when you know, you know. She’s the One,” and talked about potentially becoming a father one day, saying “If that’s in my destiny, absolutely.” (!!!!!) 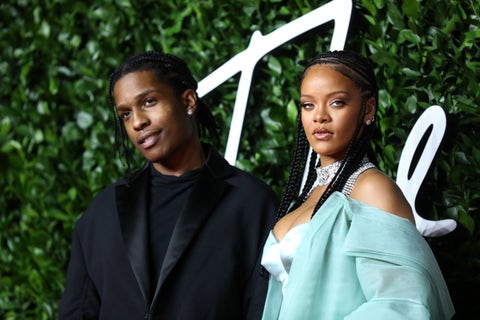 According to Us Weekly back in December, “A$AP has been very into Rihanna for years,” and a source told the mag he was “always the instigator in their flirtatious connection.” At first, Rihanna “would brush off his advances and kept him in the friend zone” but “things changed over the summer and they finally hooked up. They’ve been together ever since.”

The couple spent the holidays together, and a source told Entertainment Tonight “Spending Christmas together was an obvious step for Rihanna and A$AP. They’ve known each other for so long as friends and in a work setting, which makes it so easy for them to get along, travel together, and be involved in each other’s lives to the full extent. They always have such a good time together and definitely seem in love.”

You love all the deets on celebs. So do we! Let’s overanalyze them together.