‘I’m in my best shape ever!’ 5ive star Abz Love, 41, poses shirtless to show off his weight loss as singer reveals he feels ‘younger now than 20 years ago’

5ive star Abz Love has unveiled his incredible new physique, after losing weight through an overhaul of his diet and lifestyle.

The 41-year-old former boybander took to Instagram on Monday evening to show off his new slender frame and rippling abs, while admitting he’s in his best shape ever.

Abz, real name Richard Abidin Breen, told The Sun: ‘It’s been quite a few years, but I’ve now got things back on track and I’m in the best shape I’ve ever been in. I feel younger now than I did in the band twenty years ago.’ 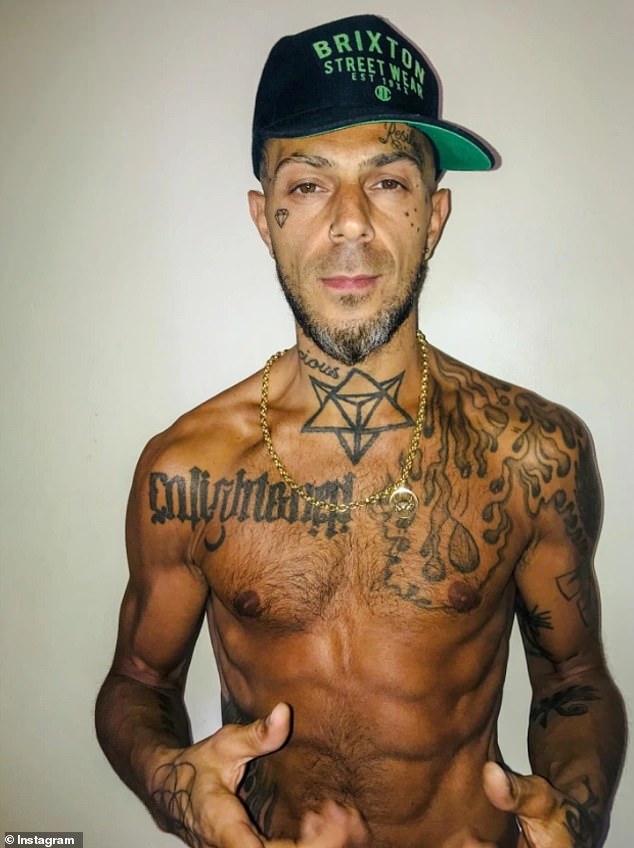 Abz has abs again! 5ive star Abz Love has unveiled his incredible new physique, after losing weight through an overhaul of his diet and lifestyle

‘Mentally I’m in a brilliant place and all my troubles are behind me,’ he continued. ‘For me, it’s all about balance, eating and sleeping well and regular exercise.’

Captioning the image of himself on Instagram, the star further said of his physique: ‘I got my abs back… It’s mad what a consistent amount of exercise and most importantly a great diet can do!

‘When lockdown started I challenged myself to get my abs back and safe to say I’ve smashed it! I’ve been using the amazing plans from @dotheunthinkableuk to help me get back in shape and I honestly couldn’t recommend them enough. 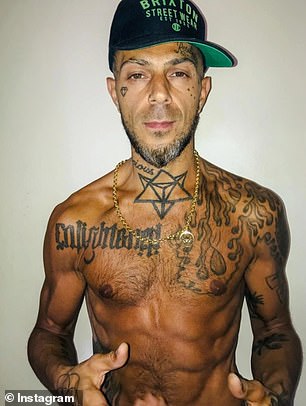 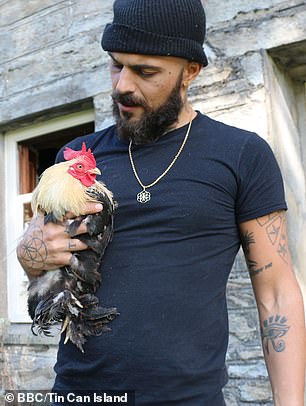 Setting the tone: The star’s frame was notably more toned that his previous post-boyband days

‘They make eating better and losing weight easier than I ever thought possible! @dotheunthinkableuk are great as they offer plans that aren’t just super convenient but they’re also tailored to your goal.

‘You get sent all sorts of high protein meals (pizza, curry, pasta) as well as tasty snacks and other goodies all packed full of goodness and ready in minutes!

‘It’s honestly so so good! All I have to do is open my fridge, bash a meal pot in the microwave for 6 minutes and I’ve got a healthy, high protein meal ready!

‘Honestly if you’re wanting to get in shape for summer now is the time to start and these guys can help you get there!’ 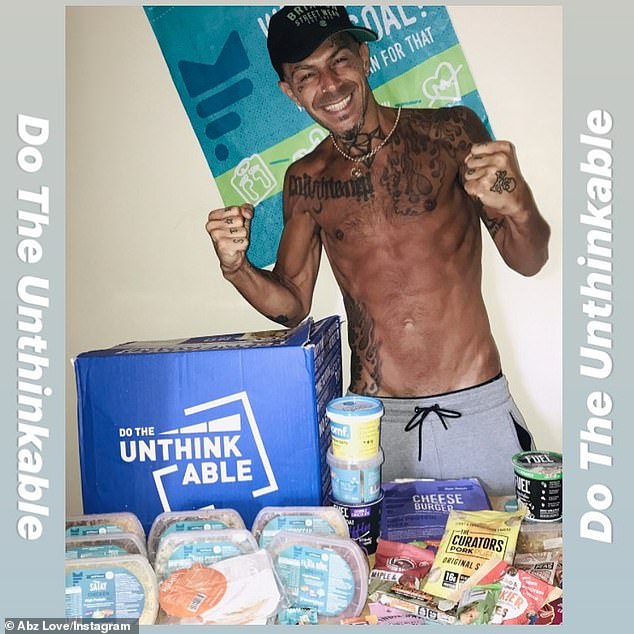 All details: Abz proudly shared his new look on Instagram, as he revealed how he achieved it

And in 2018, Abz openly discussed the perils of fame in an interview with MailOnline, revealing how a lack of support system fuelled his addiction and left him suicidal.

Abz grew up on a council estate in Hackney, east London and was thrust into the limelight when he auditioned for Simon Cowell’s boy band 5ive aged just 16.

The band enjoyed huge success, selling more than 20 million records worldwide – but while he ‘experimented’ with drugs and alcohol at the time, Abz’s struggles began when his solo music career petered out following his 2003 album.

Discussing the importance of having the right people around you, he warned that young, impressionable stars can easily fall victim to the perils of fame. 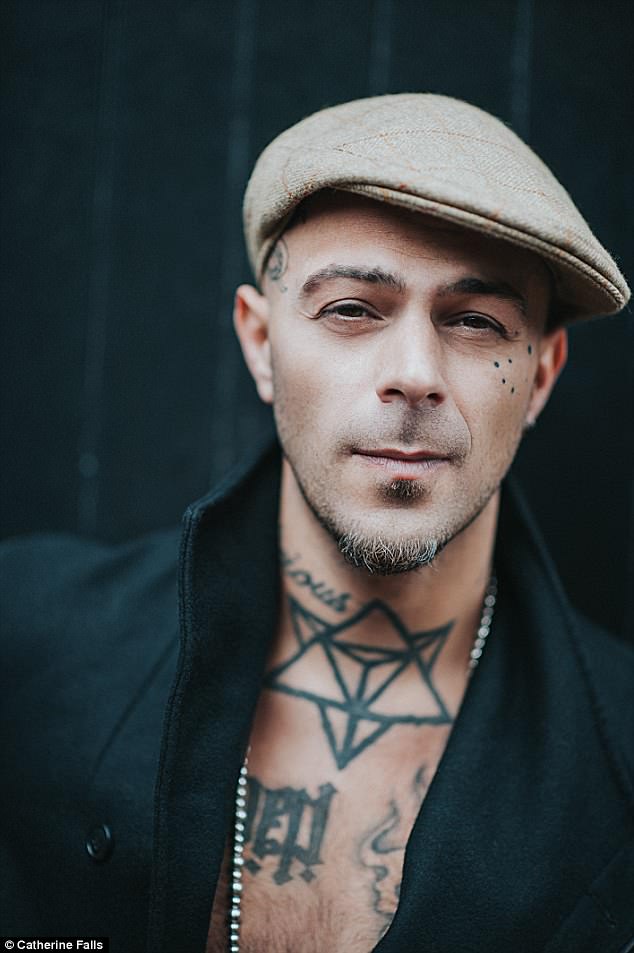 Pitfalls of fame: In 2018, Abz openly discussed the perils of fame in an interview with MailOnline, revealing how a lack of support system fuelled his addiction and left him suicidal

He told MailOnline: ‘They’re puppets for a record company, they’re not looking out for your well-being. They just want to make money. It’s part of what comes with fame.

‘They pick you up from a broken background, they throw you out into the world – lights, cameras flashing – and then spit you out [and go], next! It’s messy.’

Issuing a word for warning for pop star Zayn, 27, who found famed on Cowell’s flagship show The X Factor in 2010 before forging a solo career, Abz revealed he sees a lot of himself in the young singer.

Abz said: ‘I had anxiety, I still get anxious and I start sweating, worrying about the future – and cannabis doesn’t help that. I know Zayn blazes and does all of that stuff.

‘With Zayn, I can see all of the same steps I went through, he’s becoming very insular, very introverted. He doesn’t do shows, he loves his music but he doesn’t like the fame and all the attention – and I can completely relate.’ 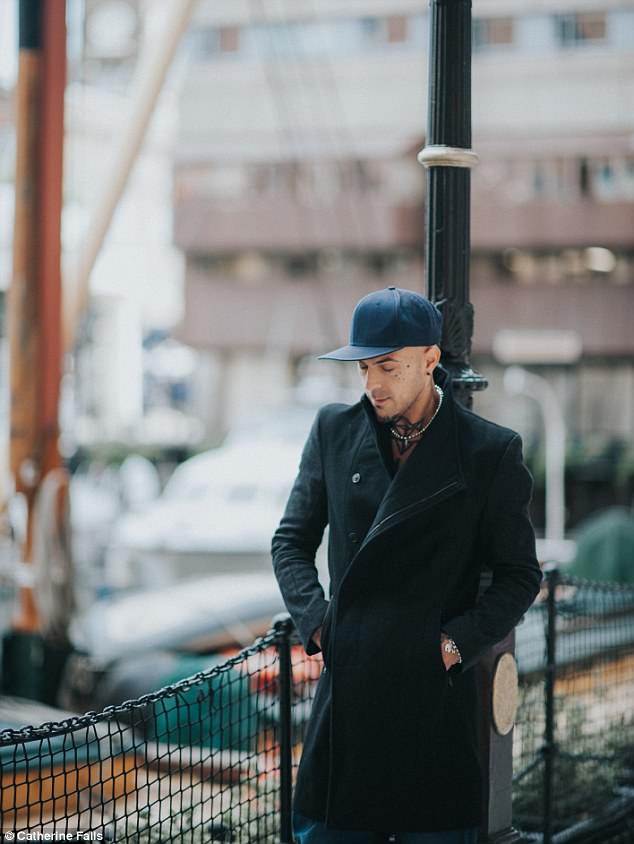 Price to pay: Discussing the importance of having the right people around you, he warned that young, impressionable stars can easily fall victim to the perils of fame

‘There is absolutely a dark side to this,’ Abz said of the music industry and party lifestyle that often comes with it.

‘If you’ve not got the right people around you, new people come into your life and start telling you how great and amazing you are, give you more drink…

‘It’s not coming from the right place. It’s coming from an egotistical place where it’s about how good you look, fame and fortune.’

Describing how his own life spiralled out of control, Abz revealed lack of support and guidance left him depressed, bored and searching for a new high when 5ive initially went their separate ways (a decision he firmly fought against).

He explained: ‘You have a bit of money, you don’t know what else to do apart from spend it, no one is there telling you to invest. I had this big warehouse and a penthouse in East London but I was just standing around thinking, “Jesus, I’m so bored, there’s nothing to do!” 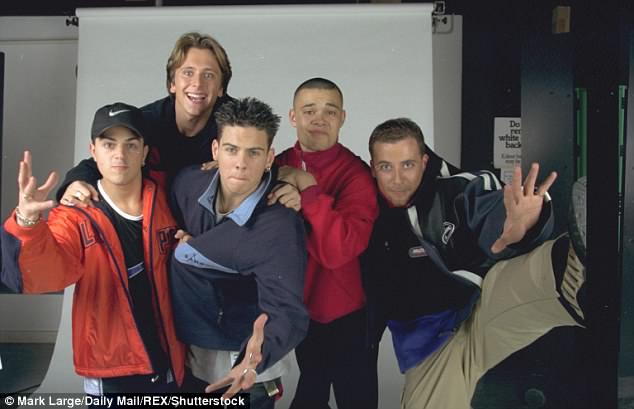 Troubled times: Abz revealed lack of support and guidance left him depressed, bored and searching for a new high when 5ive went their separate ways

‘You see it now, Justin Bieber’s [social media] videos and stuff, saying – I’m so bored. Everyone’s bored, man! You have this high of fame when you’re blowing up and doing shows and then your downtime just kills you.’

Abz’s partying took a turn for the worse when was left homeless after his former agent allegedly stole £250,000 of his fortune.

Battling a crippling sense of loneliness, the singer began paying strangers to hang out with him, having cut off his pre-fame friends and family.

‘It didn’t seem sad at the time. Looking back that’s pretty messed up – who were those people taking that money? It gets to a point where you feel like you’re missing out if you don’t go out,’ he said.

‘It turns into a vicious cycle of drink and hangovers, then it got to a point where I didn’t get hungover – and I would mix everything. I wouldn’t even [be able to] get drunk anymore, you’d just get blackouts.’ 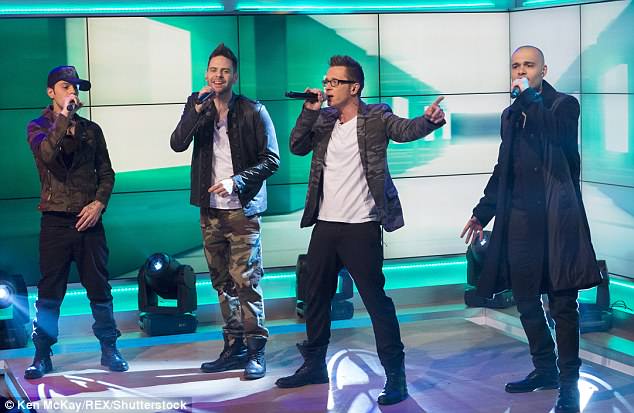 Different paths: Abz said he was too afraid to turn to his 5ive bandmates – Sean Conlon, Ritchie Neville, Scott Robinson, J Brown – for help, for fear they wouldn’t understand

During a bad drug trip, Abz came face-to-face with a vision he believed was the devil, and he repeatedly considered suicide.

‘It’s been one chaotic moment after another in my life. I’ve had attempted suicide, thinking about stuff like that where it’s really shifted my balance.

‘After three or four times you think OK, I can’t keep doing these same routines, I need to change something.’

The star – now seven years sober – went cold turkey, moving to a farm in rural Wales and immersing himself in nature in a bid to change his life.

Even in his hour of need, Abz said he was too afraid to turn to his 5ive bandmates -Sean Conlon, Ritchie Neville, Scott Robinson, J Brown for help, for fear they wouldn’t understand.

‘I didn’t reach out purely because I didn’t think they would understand. None of them have done any of this or been on this journey – they’ve experimented but I think they’ve had good people around them, friends and family members to keep them on the straight and narrow,’ he admitted.

Abz had planned to reunite with his 5ive bandmates for a tour, but their plans were scuppered by the COVID-19 pandemic and inevitable nationwide lockdown.

Now back in London, Abz has fond memories of his time in the country and says he finally feels free of temptation. 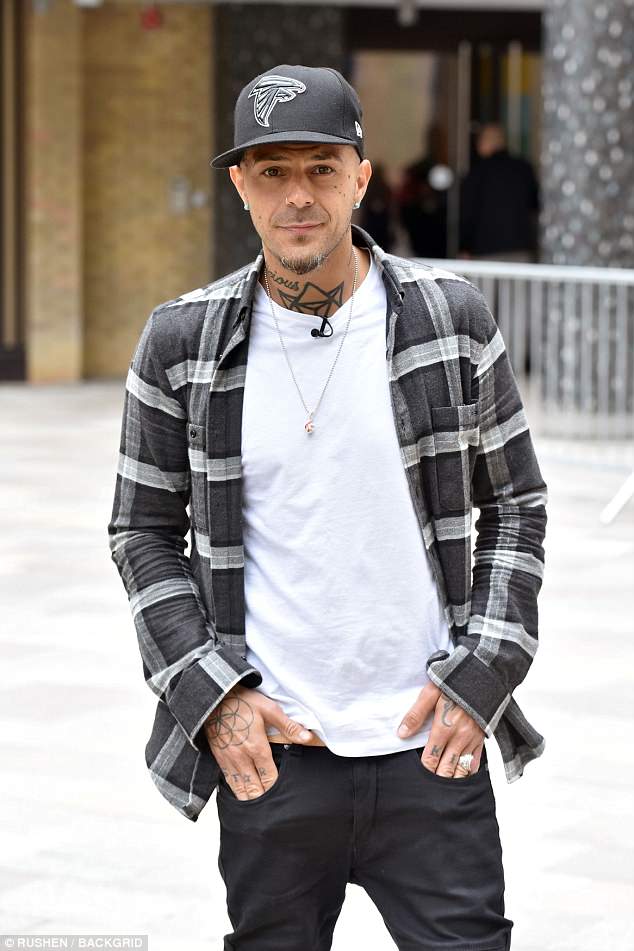 Turnaround: The star – now seven years sober – went cold turkey, moving to a farm in rural Wales and immersing himself in nature in a bid to change his life, and has never looked back

The former boy-bander said: ‘If anyone puts themselves through [beating addiction], really looks at the dark portions of themselves – you can be around [the party lifestyle] and it doesn’t bother you. I was hugging trees, loving life, around animals -alpacas, horses, pigs, cats.

‘You still have to remember that person you were when you got through it. Now I just see gratitude. I don’t get as angry, as upset as I used to. I take it in my stride – I’m nearly 40 now!’

The optimistic star insisted that he feels blessed to have turned his life around, and is focusing on the positives.

‘The choices I’ve made have not been the best, but they’ve made me who I am, they’ve given me my character,’ he said. ‘I’ve got TV things happening – I’m a busy boy. I’m happy to still have that opportunity to do bits and bobs and still make my money, I’ve got no qualifications. I’m grateful.’

While he is yet to find love – calling off his engagement to fiancée Vicky Fallon in 2017 after he discovered she was offering herself as a £2,000-a-night escort – Abz remains optimistic and open to settling down. 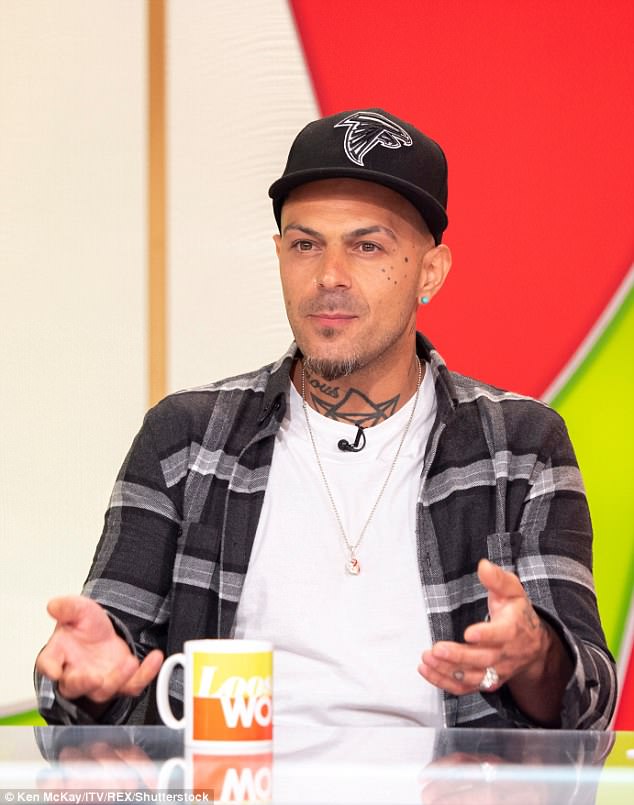 Telling his story: A big part of his journey has been helping others – which he aimed to do through his 2018 documentary Me And My Addiction

Admitting women have been put off by his past, he said: ‘I am wary! But it gets to a point where you think – I want to feel it! I’ve been through the lowest of the low, the highest of the highs.

‘That’s one good thing, I’m not scared of falling – I know what’s down there. At the top it’s just blue skies, let’s just stay positive.’

One of the major benefits has been reconnecting with his mother, making up for lost time after cutting her out of his life for the best part of seven years.

He enthused: ‘I wake up in the morning and I’m a happy boy, the sun is shining, I’m feeling blessed. I’m at my mum’s back in Hackney – I’ve got to rebuild all of that.

‘I’m grateful for this time I’ve got with her, I’m looking after her, I’m taking her shopping, doing the little bits and pieces she wants done. I’m paying back my karma in that way.’ 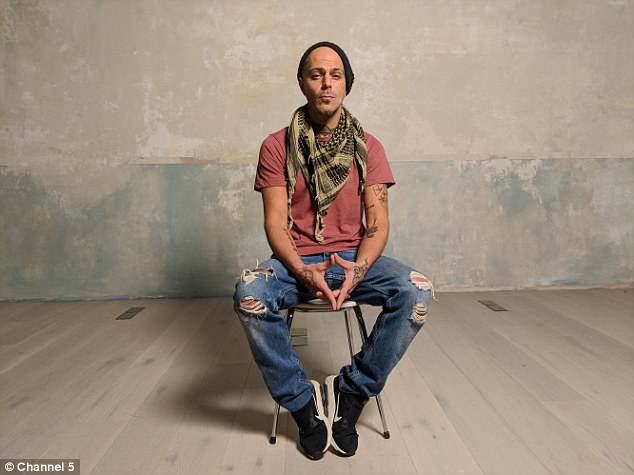 Ups and downs: The star has been open about his personal ups and downs since finding fame