Canberra , Sunday – Luck and a navy aircraft pilot’s skill combined this afternoon to avert a tragedy involving the Minister for the Navy (Senator Gorton) and five naval airmen. 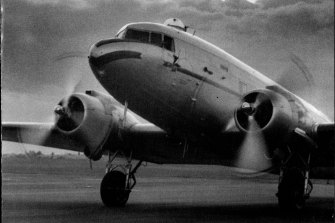 A Dakota aircraft similar to the one flown by Senator Gorton.

For almost three hours and a half the pilot, Lieutenant-Commander A. E. Payne, circled his Dakota aircraft above Canberra with Senator Gorton and four crewman aboard, trying to repair a fault undercarriage.

Finally, at 3.21 pm, “because there was nothing else to do,” the Dakota was prepared for an emergency landing.

With Lieutenant-Commander Payne at the controls, the Dakota made a perfect “touch-down” landing safely – still with one wheel out of the correct landing position.

So delicately was the aircraft balanced when it came to a stop that Senator Gorton and the aircrew were not allowed to move in their seats until a jack had been placed under the faulty wheel.

During the ordeal Senator Gorton, an ex-pilot who “rode a couple of Kittyhawks into the ground,” read a science fiction thriller and ate the lunch prepared for him by navy steward A. Roberts. 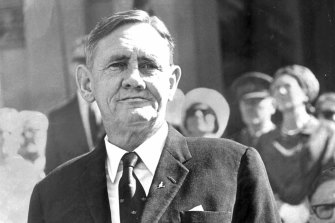 The midair drama began shortly before midday, when the Dakota took off from Canberra’s Fairbairn aerodrome bound for Kerang, where Senator Gorton was to open the air pageant.

Immediately the “red light” went on to show that one wheel would not retract.

He decided to take the aircraft in to find out what was wrong, and then discovered the wheel would not lock into position for a landing.

At this stage the Prime Minister (Mr Menzies) who had just returned by air from Adelaide was informed of the aircraft’s plight.

During the afternoon he telephoned several times to discuss plans for bringing the aircraft in.

After the disabled Dakota had been in the air for an hour, the R.A.A.F. commander at Fairbairn sent a R.A.A.F. Dakota with engineer experts on board to fly alongside the navy plane.

The R.A.A.F. engineers, in touch with the navy pilots by radio, tried to see if the Dakota’s wheels were in fact locked down and that the “red light” was the result of faulty wiring.

Tensions rose among the onlookers when the R.A.A.F. plane landed and an engineer, asked how “things are going up there,” said: “You might be able to get some Dakota spare parts.”

At 2.30 pm, with strategically placed fire tenders and ambulance lining the runway, Lieutenant-Commander Payne made his choice.

“I’ll bring her in now,” he said over the radio to the waiting navy and air force officers.