A house fire in a quiet Suffolk village has claimed the lives of a man and a woman whose screams for help could be heard by horrified neighbours.

Despite a massive effort by Suffolk Fire and Rescue the pair died shortly after 9am this morning, after a blaze in a single room spread quickly to engulf the whole house and neighbours choked on thick black smoke.

The heat from the flames was so intense that neighbours gathered in the street could not gain access to save the pair.

The fire in the semi-detached home in Chapel Close in Capel St Mary, just off the A12 near Ipswich, started just before 8.20am.

Karen, who was staying with her partner in the house next door, told the East Anglian Daily Times: ‘I had been awake about five or 10 minutes and I suddenly thought I could hear someone screaming for help. 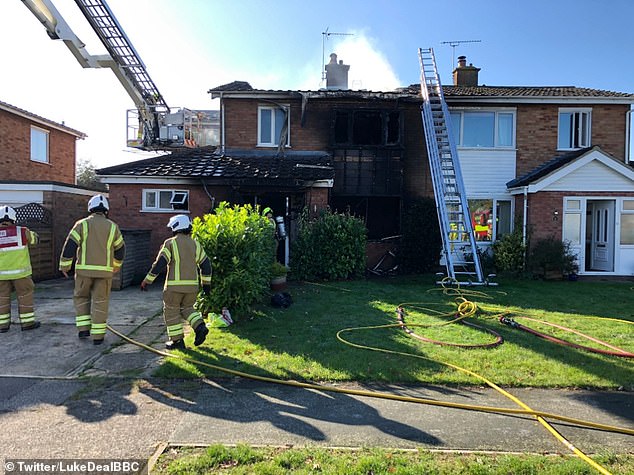 ‘I looked out of the window and could see smoke coming from next door so I phoned the fire brigade and woke my partner up and we came outside where the family were all shouting outside for help.

‘The room was on fire and the family said there were people still inside, but it was just too intense for anybody to get in as it was too dangerous.

‘It spread so quickly and engulfed the whole house. It was horrible.’

Eleven fire crews responded to the 999 calls, but Ian Bowell, area commander for Suffolk Fire and Rescue Service, said his teams arrived to find a ‘fully-developed fire’ with ‘smoke and flames coming out of the ground floor and upstairs windows’.

He said firefighters entered the house in Chapel Close to try to rescue those inside but that two people died at the scene. 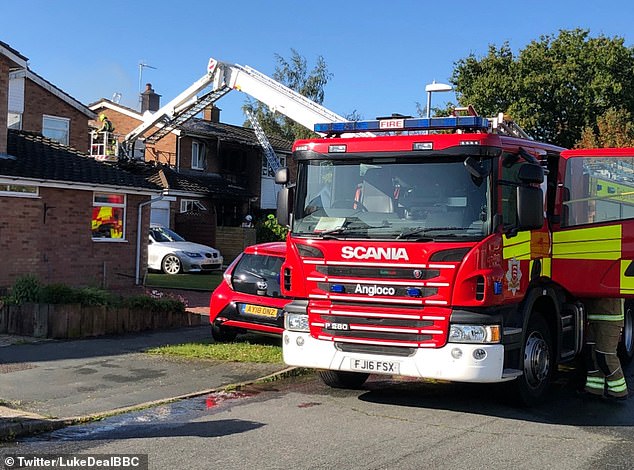 Paramedics and police were also called to the scene, but shortly after 10am it was confirmed that two people had died in the tragedy.

She said: ‘I was sitting in my conservatory eating my breakfast at about 8.20 and all of a sudden I couldn’t see out because of the smoke.

‘At first I thought it was a bonfire but knew it couldn’t have been because of how thick it was.

‘I came outside and all I could see were huge flames coming out of the house.

‘I could also feel the smoke in my throat and I couldn’t believe what I was seeing.’

Suffolk police closed the street during the incident, and instructed locals to stay away from the area while the investigations continue.

The fire spread to the roof of the neighbouring property and crews were seen removing roof tiles in order completely to extinguish the blaze. 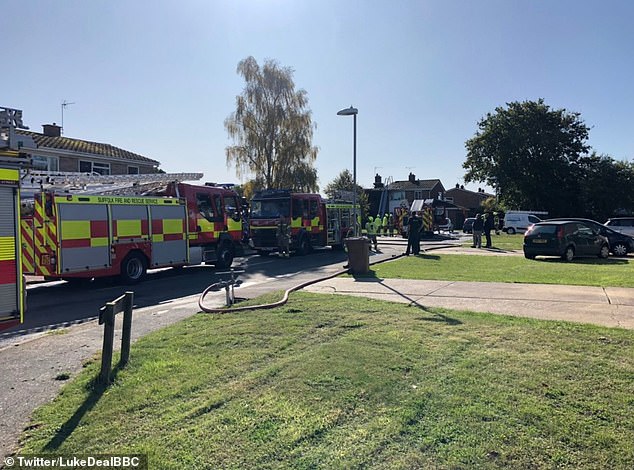 Police and fire investigators are now working to determine the cause of the blaze while a police cordon remains in place in Capel St Mary, Suffolk

Ian Bowell added: ‘It is absolutely tragic and this community in which they lived in is in a complete state of shock at this moment in time.’

A Suffolk Police spokeswoman said: ‘Officers were called by the Fire Service at approximately 8:25am today, Wednesday 2 October to reports of a large fire at a residential property on Chapel Close in Capel St Mary.

‘A man and woman were sadly found deceased inside the property. Nobody else is believed to have been injured.

‘The Suffolk Fire and Rescue Service and Police remain on the scene at this time. The deaths are currently being treated as unexplained and the cause of the fire is unknown at this stage.

‘A police cordon remains in place while Crime Scene Investigators (CSI) and fire investigators carry out enquiries to establish the cause.’