Lviv/Kyiv: Ukraine’s military warned residents to brace for more indiscriminate Russian shelling of critical infrastructure, as US President Joe Biden issued one of his strongest warnings yet that Moscow is considering using chemical weapons.

A powerful missile struck Kyiv’s Retroville shopping complex on Monday, Ukraine time, killing at least eight people, officials said, the latest violent attack on the capital in the past week that have left residents fearing what might come next. The devastation at the mall was among the worst seen in Kyiv since the war began. 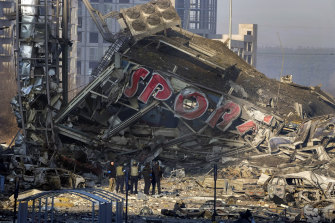 The shelling of the Kyiv Retroville mall was one of the most powerful to hit the capital city in the last four weeks.Credit:AP

Russian troops have failed to capture any major Ukrainian city more than four weeks into their invasion, but the Ukraine daily defence briefing warned that air strikes had increased in the last 24 hours.

“In addition to the use of many unmanned aerial vehicles, the enemy uses bombers, assault and fighter aircraft, cruise missiles, and ballistic missiles in various directions,” Ukraine’s Air Force Command said in a statement.

Without citing evidence, Biden said Russia’s false accusations that Kyiv had biological and chemical weapons illustrated that President Vladimir Putin was considering using them himself.

Putin’s “back is against the wall and now he’s talking about new false flags he’s setting up including, asserting that we in America have biological as well as chemical weapons in Europe, simply not true,” Biden said at a Business Roundtable event.

“They are also suggesting that Ukraine has biological and chemical weapons in Ukraine. That’s a clear sign he’s considering using both of those.”

The Russian embassy in Washington did not immediately respond to a request for comment.

Washington and its allies have previously accused Russia of spreading an unproven claim that Ukraine had a biological weapons programme as a possible prelude to using such weapons itself, but Biden’s remarks on Monday were some of his strongest yet on the subject.

Biden also said Russia used a hypersonic missile to destroy a weapons depot on Saturday “because it’s the only thing they can get through with absolute certainty”.

A White House official later clarified that Biden was confirming Russia’s use of such an advanced missile, but noted that the impact of the attack was unknown.

Russia claimed on the weekend that they had used a long-range hypersonic “Kinzhal” missile, capable of travelling at 10 times the speed of sound, to take out a weapons depot in the southern city of Mikolayiv.

Russia says it does not attack civilians although the devastation wrought on Ukrainian towns such as Mariupol and Kharkiv are reminiscent of previous Russian assaults on cities in Chechnya and Syria.

The southern port of Mariupol has become a focal point of Russia’s assault and lies largely in ruins with bodies lying on the streets, but attacks were also reported to have intensified on the second city Kharkiv on Monday.

Biden is due to travel to Europe this week for meetings with allied leaders to discuss tighter sanctions on Russia, on top of the unprecedented financial penalties already announced.

But EU foreign ministers still disagree on whether and how to include energy in sanctions, with Germany saying the bloc was too dependent on Russian oil to impose an embargo.

Mariupol, now in ruins, is the focus of Russian attacks. Credit:

Biden singled out India for being was “somewhat shaky” in acting against Russia, its biggest supplier of military hardware, but praised the other members of the Quad group, Australia and Japan.

India has urged an end to the violence in Ukraine but has abstained from voting against its old Cold War ally Russia.

Even though India has grown close to the United States in recent years, it still depends on Russia for a continuous supply of arms and ammunition amid a Himalayan border standoff with China and perennial tension with Pakistan.

The conflict has driven almost a quarter of Ukraine’s 44 million people from their homes, and Germany predicted the refugee number could reach as high as 10 million in coming weeks.

Ukrainian officials hope that Moscow will negotiate a withdrawal. Both sides hinted last week at progress in talks on a formula which would include some kind of “neutrality” for Ukraine, though details were scarce.