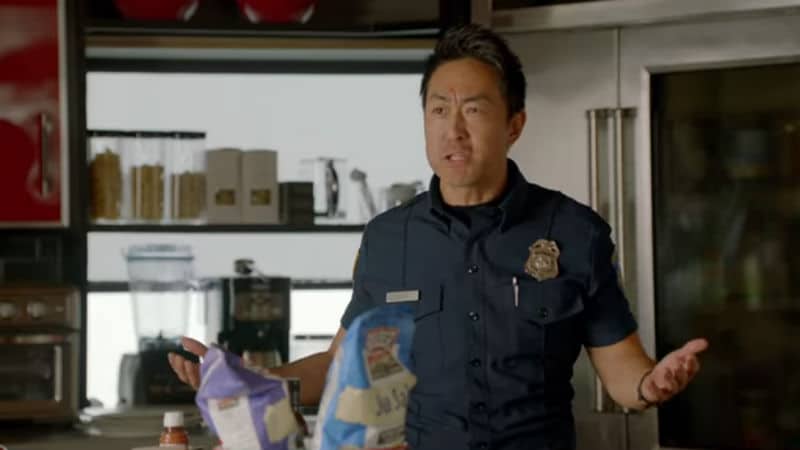 9-1-1 aired the winter finale tonight and the cliffhanger it left has viewers wanting more. Since the beginning of Season 2, there have been plenty of questions about Maddie’s (Jennifer Love Hewitt) estranged husband and the extent of the abuse she endured.

With the budding romance between Maddie and Chim (Kenneth Choi), there were some endearing moments. He went and tried to pick out a Christmas tree for her, with Buck (Oliver Stark) in tow. During a chance meeting with Joe Bailey (Brian Hallisay), he got some good advice about the right Christmas tree.

Who else has a feeling Christmas is resurfacing some painful memories for Maddie? ?? #911onFOX

It felt a little weird when Chim crossed paths with Joe again and this time, he was missing his wallet. Of course, the savior came through again and helped him purchase what he had intended to buy. This piqued some curiosity, especially because he was an unfamiliar face.

As it turns out, Joe Bailey doesn’t exist. He is Maddie’s ex-husband who has stalked her all the way to California. Now, he has Chim’s wallet and knows where she has been staying. Ironically, Brian Hallisay is Jennifer Love Hewitt’s real-life husband.

On a more positive note, Athena (Angela Bassett) accepted the proposal Bobby (Peter Krause) offered her. The two are officially engaged to be married and their friends and family seemed to be happy with the idea. This is one piece of the winter finale that has fans excited to tune in when the show returns.

The cliffhangers left from the winter finale seem to have hooked viewers in, giving them tidbits to research theories and figure out how all of this will go down when 9-1-1 returns to the air. The spring premiere is slated for March 18, which is a little over three months away.