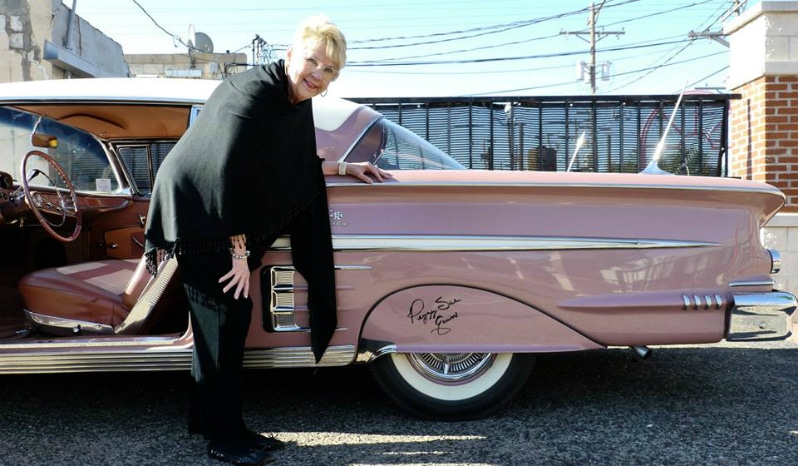 Peggy Sue Gerron, the inspiration for Buddy Holly’s breakout hit in 1957, Peggy Sue, passed away on Monday, September 1. She was 78. According to the Lubbock Avalanche-Journal, Gerron died at the University Medical Center in Lubbock, Texas.

It was the mid-1950s when up and coming musician Holly and high schooler Gerron first met in Lubbock. According to the woman would go on to become a household name, their first encounter was a bit earth-shaking.

“He ran over to me, guitar in one hand, amp in the other, and said, ‘I don’t have time to pick you up, but you sure are pretty’, before he ran off,” Gerron said, adding that someone else had to tell her that it was Buddy Holly who knocked her over.

Gerron eventually married Jerry Allison, the drummer from Buddy Holly and The Crickets, but the story of how Peggy Sue influenced Buddy’s enduring hit is shrouded in legend. One version has it that the hot hit was first titled, “Cindy Lou,” for Holly’s niece, with Allison, telling him to change the name to impress his future wife.

In its heyday, “Peggy Sue” reached number three on the Billboard singles chart, with Holly writing a not so famous follow up entitled, “Peggy Sue Got Married.”

Tragically Holly was killed in a plane crash in 1959. What happened to Peggy Sue?

Eventually, Gerron and Allison divorced and the infamous lady made her way back to her native California. By all accounts Gerron had a had a full and active life, going to college, working as a dental assistant, and remarrying. Gerron and her second husband had two children together.

Believe it or not, “Peggy Sue,” may not even have been Gerron’s biggest claim to fame.  According to her website, she was the first licensed woman plumber in the state of California! Gerron was also a dedicated ham radio enthusiast, and she published a memoir,  entitled, what else, Whatever Happened to  Peggy Sue? in 2008.

Before her death, Gerron returned to Lubbock in the mid-90s in order to help take care of her ill mother.  She was 78 at the time of her death.