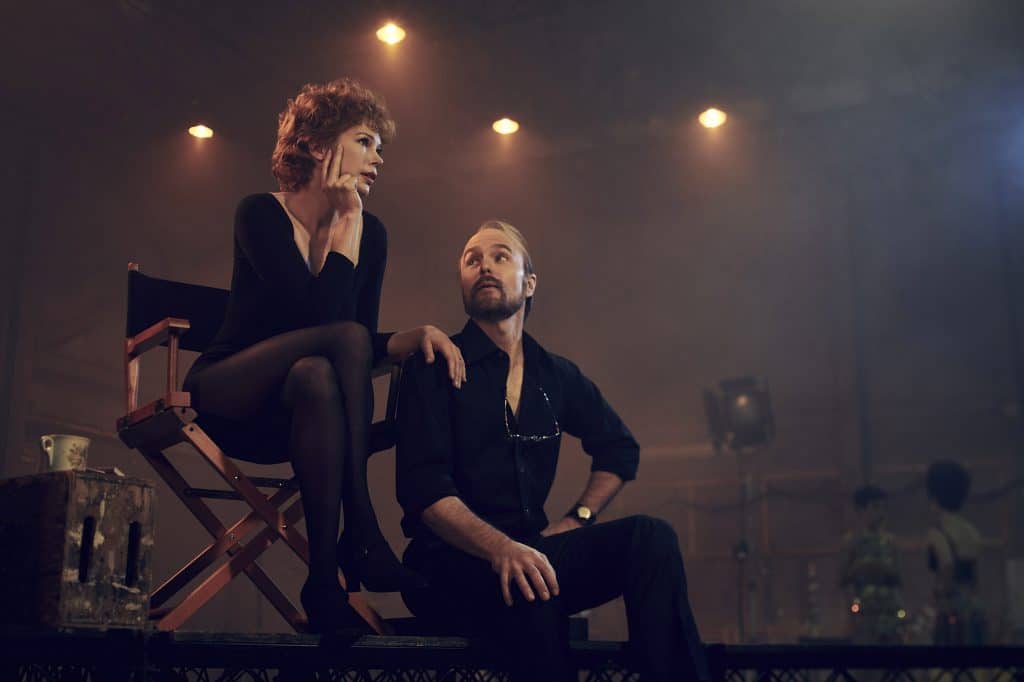 With his work on such Broadway shows as Pippin and Chicago, Bob Fosse made his name in 1960s and ‘70s New York as perhaps America’s most influential director/choreographer.

But today at the TV Critics’ Association Winter Press Tour in Pasadena, FX unveiled its new eight-episode series Fosse/Verdon (premiering Tuesday, April 9), showing how many of the works and movements we’ve come to see as iconic arose from Fosse’s collaboration with his leading lady, wife and overall muse, Gwen Verdon.

“There was nothing she couldn’t do, and made it look incredibly effortless,” explains Michelle Williams, who stars as Verdon opposite current Oscar nominee Sam Rockwell as Fosse.

A dance teacher as well, Verdon at one time taught her fellow A-list stars, including Marilyn Monroe who, Williams says, once quipped, “If Gwen Verdon can’t teach you to dance, you’re rhythm bankrupt with two left feet.”

Rockwell says that although he and Williams didn’t have formal dance training, they’ve both had enough recent experience that “Michelle and I can hoof.  We’re movers.”  Movers, he notes, who are vastly aided by the series’ choreographers, Andy Blankenbuehler and Susan Misner.

As Williams adds, what she already knew about dance was helpful, but when recreating Fosse and Verdon down to the minute detail, “this is the next level of difficulty.”

Based on Sam Wasson’s 2014 book Fosse, and adapted by Steven Levenson, Fosse/Verdon depicts not only its two title characters — Verdon died in 2000, and Fosse in 1987, in Verdon’s arms, in Washington, DC en route to the opening night of a revival of Sweet Charity — but also such living legends as Sweet Charity star Shirley MacLaine; Liza Minnelli, who won an Oscar for Fosse’s film version of Cabaret in 1972; and Fosse’s longtime companion and muse, the actress/dancer Ann Reinking, who appeared in his acclaimed semi-autobiographical film All That Jazz.

(Another real-life figure, Fosse and Verdon’s daughter Nicole, calls All That Jazz a “whitewashed” version of her father’s story.  She serves here as a producer, and brought with her not only archival research material but introductions to dancers with whom Fosse had worked.)

But even after the recent lawsuit brought by the 102-year-old actress Olivia de Havilland over her depiction in FX’s Feud: Bette and Joan, Fosse/Verdon’s producers don’t expect any problems with the portrayals.  None of the actresses has yet seen the show, but producer Thomas Kail expects them to be pleased.  “We were careful to capture their essential characteristics,” he notes, “and not [resort to] mimicry.”

The show will feature faithful recreations of Fosse’s now-iconic movements — but it’s not all about Fosse’s moves on-stage.  The show also explores Fosse’s philandering, high-flying nature and the cost it took on his marriage to Verdon — in ways that the now-grown Nicole, remembering being a kid at certain rocky moments, can fill in what was happening around her and say “Now that all makes sense!” Despite the sacrifices and the toll their careers took on their marriage, Fosse and Verdon never officially divorced, and continued to be drawn together until the end of Fosse’s life.

Kail says that he and Rockwell had long been looking for a project to work on together, and he was struck by the possibilities when he was sent Wasson’s book back in August of 2016.  As luck would have it, Kail ran into Rockwell in a hotel lobby a few days later, and asked the actor to breakfast. Rockwell said his dream would be something set in 1960s and ‘70s New York, and so when Kail said “a TV show based on Bob Fo-“, the actor said yes before Kail could finish the word.

During an earlier interview about FX’s programming, the network president, John Landgraf, had noted how the theme of Feud: Bette and Joan had been how women have long been given so few opportunities, and then pitted against each other to claim them.

And so now, as we explore that problem in the recent past in our own evolving era, Fosse/Verdon is not only “a fascinating, classic lifelong Hollywood love story,” but it also “reclaims Gwen Verdon’s place in the genius of that creative output. And now is a really good time to reclaim that.”