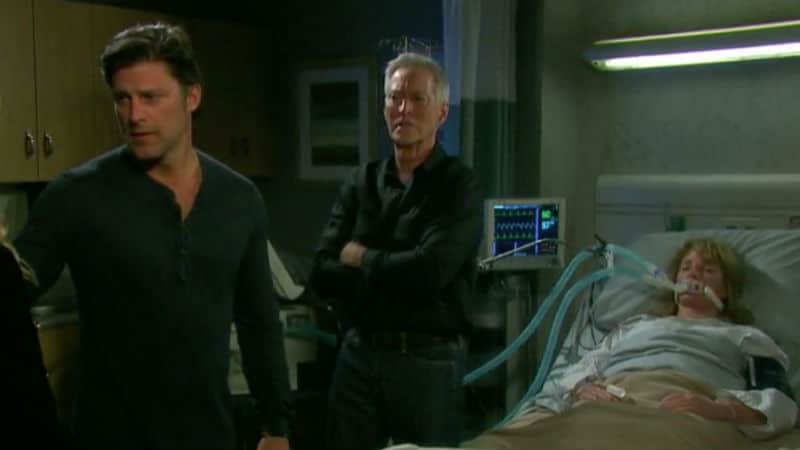 Days of our Lives spoilers for next week’s NBC sudser tease that once loving family members will be pitted against each other as passions come into play, a wronged vixen strikes out in a dangerous manner, and a favorite couple is in serious jeopardy.

Are you ready for all of the soapalicious spoilers that we could round up? Let’s get started dishing the dirt!

Gabi (Camila Banus) is going down a dark road that she may not be able to return from. She’s had a few bad breaks in her life, but her growing hunger for revenge threatens to eat her alive.

Next week, the raven-haired lass puts into motion a sinister plan when she drugs Abigail (Marci Miller). Sure, Abi is responsible for her going to prison on a false charge. Behind bars she was beaten to a pulp, leaving her infertile.

But does she really think that poisoning Abi will make everything all right? And how can she justify harming a pregnant woman?

Marlena’s (Deidre Hall) loved ones are at serious odds. This week Belle (Martha Madison) found an advance directive from her mom, indicating she did not want to be kept alive by machines. Before anyone can change her mind, lawyer Belle squawks like a hawk and she lets it be known that Marlena’s ventilator must be turned off. Ice cold!

And just like that, Marlena is removed from life support. The sorrow and the anger that spill forth afterward is palpable. Let’s just say that Belle and Sami (Alison Sweeney) are greeted with some major side eye after what’s being done with Marlena.

When Ben (Robert Scott Wilson) is arrested, Rafe (Galen Gering) suspects that Hope (Kristian Alfonso) set him up! Look for things to get ugly fast when the lovebirds quarrel over issues of trust and scruples. Um, do either Rafe or Hope have a leg to stand on here?

But that’s not the only angry person Hope has to worry about. Ciara (Victoria Konefal) also wants her mom to answer some hard questions. Spoilers reveal that this latest setback for Ben will only bring the two lovebirds closer together.

Elsewhere Lucas’ (Bryan Dattilo) women throw down. A fired up Chloe (Nadia Bjorlin) doesn’t believe for one minute that “Baby Bonnie” is really his child. Will she get to the bottom of the craziness?

Not watching Days of Our Lives? You might want to tune in to watch R&B and Pop Superstar @therealtboz from the hit girl group TLC starring on the long-running daytime soap opera as #Sheila! Will you be tuning in? #tboz #daysofourlives

When Chloe confronts “Adult Bonnie” (Judi Evans), you can expect the consequences to be as hilarious as they are shocking. Will Sheila (Tionne T-Boz Watkins) arrive in time to save the day? Or will she throw a few punches instead?

Meanwhile, Will (Chandler Massey) and Sonny (Freddie Smith) continue to find it incredibly hard to fight their feelings for each other. This week Brady (Eric Martsolf) exploded when he saw them kissing in Horton Square. But they explained that it was not what it looked like, they were kissing each other goodbye.

While Paul (Sean Christopher) languishes in the hospital, how long will WilSon be able to trick him into thinking that Will still loves him?