Colt Johnson is fresh off a face-off with his exes Jess Caroline and Larissa on 90 Day Fiancé: Happily Ever After?, but it looks like he is focusing on self-improvement.

Colt took to Instagram to show off his weight loss in a new photo. While many fans praised the reality TV star for his weight loss transformation, he was also trolled for his relationship with his mother.

Colt has been on a weight loss journey after his debut on OnlyFans- or perhaps the weight loss was sparked by 90 Day Fiance fans reaction to his speedo scene with Jess.

The 35-year-old was introduced to 90 Day Fiance fans in Season 6 with his Brazilian then-fiance Larissa Lima. The pair married, but the marriage lasted only 6 months.

90 Day Fiance fans watched the relationship break down on camera. Larissa was arrested for domestic violence multiple times and she publicly hurled accusations about Colt.

Colt returned in the latest season of 90 Day Fiancé: Happily Ever After? with a new Brazilian love interest, Jess Caroline.

Jess found common ground with Larissa- both suspected that Colt’s mother Debbie did not want another woman coming between them.

In Season 5, episode 8 of 90 Day Fiance: Happily Ever After? Debbie appeared to instigate a break-up between Jess and Colt by revealing that Colt’s friend Vanessa was taking care of the cats while they were in Brazil. Jess was famously jealous of Vanessa, and Colt had told her that he was no longer speaking with Vanessa.

“Good morning,” the reality star captioned his latest Instagram photo. In it, Colt is standing in front of his car at a gas station in Las Vegas.

“My bro looking lean!!!” Colt’s friend Nick Hogan wrote. Some fans noted the Uber sticker on his car, while others noted that he has air conditioning (Larissa was famously appalled that Colt’s car didn’t have air conditioning in Las Vegas). “Oooo car with air conditioning,” one fan teased. 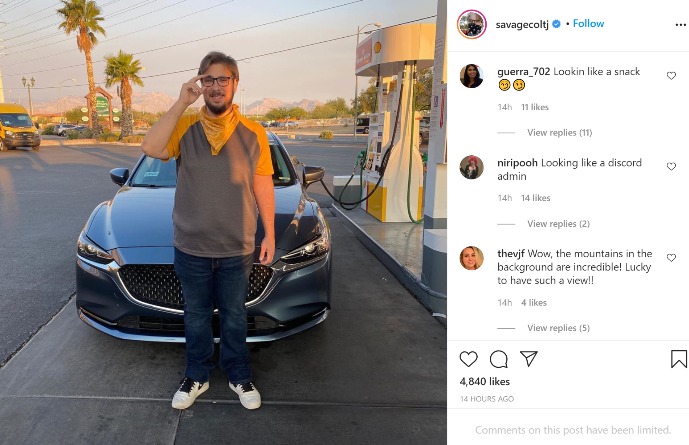 Colt’s friend Vanessa Guerra, who appeared in the Tell All event to defend him, wrote “Lookin like a snack” in the comment section.

It is unclear what is next for Colt, but he appears to be single since breaking up with Jess.

Several 90 Day Fiance fans trolled the reality TV star for his relationship with his mother. “Man Child’s day out! Congrats!” one fan commented.

Another added, “I bet his mom picked his matching shirt and bandanna for him.”

90 Day Fiance fans will have to wait and see what is next for Colt, but in the meantime, he is keeping his supporters up to date on Instagram and OnlyFans.

90 Day Fiance: Happily Ever After? is currently on hiatus. HEA Strikes Back airs on Mondays at 8/7c on TLC.