THE stage is set for a mouthwatering afternoon of racing on Coral-Eclipse day at Sandown.

The ITV cameras are in town for a top-class, eight-race card on Sunday, and our man Jack Keene has taken a close look with his race-by-race preview. 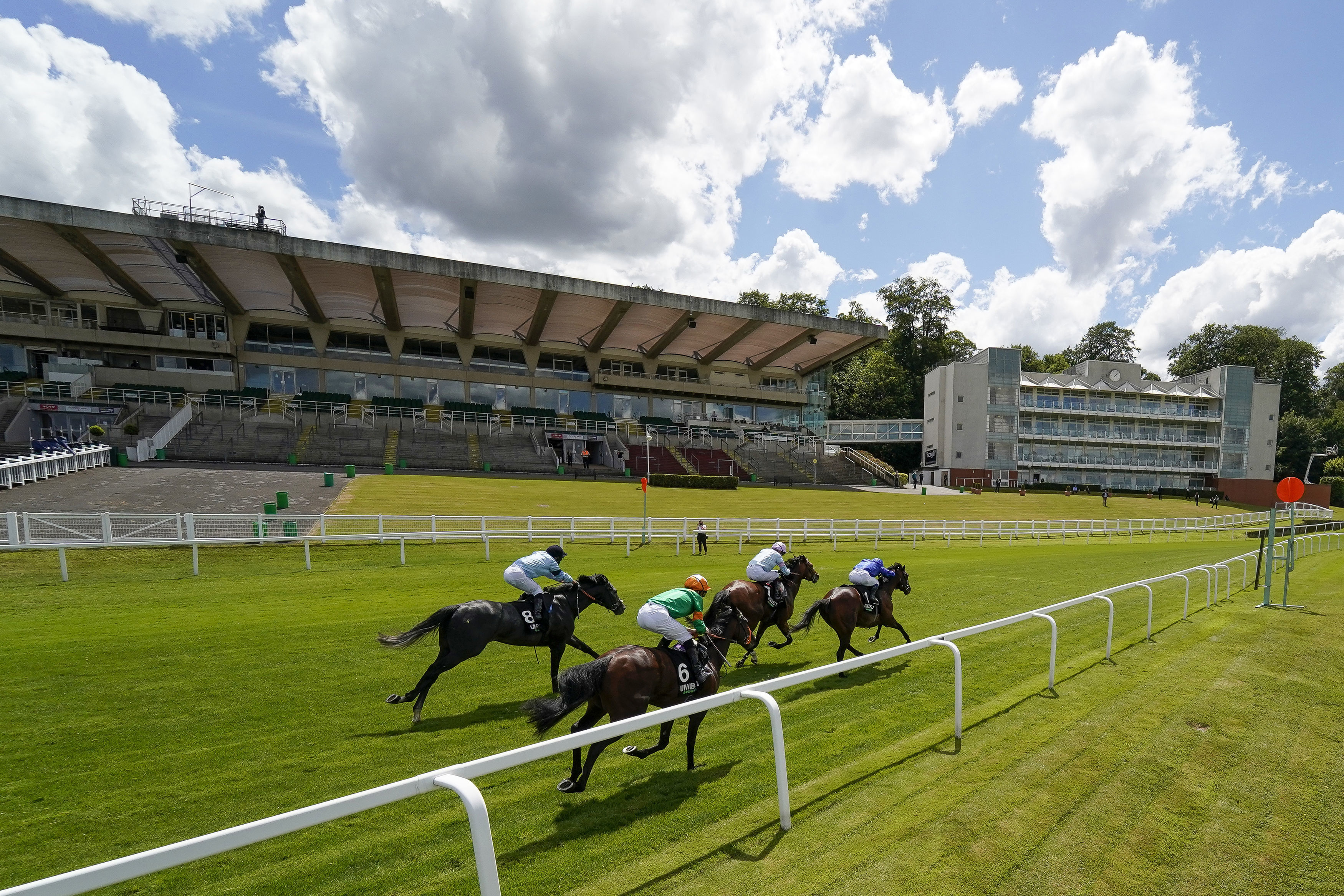 A trappy heat to start things off, with impressive Ripon winner Risk Of Thunder likely to be a warm order.

That wasn't the deepest race in the world, though, and the runner-up was well-beaten at Chepstow on Friday.

Creative Force didn't appear to get home over the stiff 6f at Ascot last month and the drop back to 5f should suit as he is quite a keen-goer.

Gussy Mac shaped with promise in a good race on debut and opened his account in gutsy fashion at Wolves. He commands respect.

But at the forecast odds, it could pay to take a chance on MACHO PRIDE for Middleham trainer Ben Haslam.

The Camacho colt sprung an upset at 16-1 on debut at Newcastle and followed that up with a rock-solid fifth in the Norfolk when an 80-1 outsider.

This sounder surface will suit, Oisin Murphy takes over in the plate and he has been well-drawn in stall two.

A brilliant renewal of this race.

Let's start with Lazuli, who made all for a decisive success over C&D in the Scurry Stakes 22 days ago.

He remains a sprinter with plenty of potential, but that race became something of a non-event as he was allowed to dominate and never saw another rival. He is in much deeper here.

Liberty Beach ran a superb race to finish third in the King's Stand at Royal Ascot. She is down in grade and already has a win to her name over C&D, but she had a hard enough race when third to Battaash.

She won first time out over 6f at Haydock, but she was made to work hard that day but the tough-as-teak MAID IN INDIA, who looks a bet here.

She tried to make all in that Haydock contest and was travelling all over the field at the 2f pole, but she was just caught out for fitness in the final 100 yards and had to settle for third.

She was conceding almost a stone to Liberty Beach that day and is 8lb better off now, with the drop back to 5f a big plus.

In fact, Eric Alston's speedball has run over this trip three times, winning twice (including a game defeat of Dakota Gold), with the only blemish coming at Ayr when she was found to have an infected hoof after the race.

She can lead or sit just off the pace, so if the likes of Lazuli and Caspian Prince get on with things that's fine, and she arrives nice and fresh after a four-week break.

Dakota Gold is entitled to come on for his comeback run but has the outside draw to deal with here.

A'Ali will be happier over this trip, but he was never the biggest horse in the world and there is a sneaking suspicion he may struggle this year.

You can't confidently rule out any of the five runners here, though most of them have questions to answer.

Former Melbourne Cup hero Cross Counter would take the world of beating if running up to his best.

But that is a sizeable 'if'. Since winning the big one Down Under, he has been hit-and-miss to say the least. He ran well enough in the Gold Cup last time but isn't an attractive betting proposition at skinny odds.

Withhold has been disappointing in his two runs so far this season, for all he was stretched by 2m4f on soft ground at Ascot. He is another with a point to prove, while Summer Moon is a solid handicapper but has a bit to find on figures.

Dashing Willoughby is unexposed at the trip and won nicely on his comeback, for all he was allowed a very soft lead at Newmarket.

He isn't passed over lightly, but narrow preference is for SPANISH MISSION.

He looked a thorough stayer when winning the Bahrain Trophy last summer, but he had the speed to win a huge pot for connections around 1m4f at Belmont in September.

He was below par when last seen in Dubai, but he remains open to significant progress this term and the Simcock yard looks to finally be turning a corner after a slow start to the season.

Dark Vision and Montatham fought out the finish to the Royal Hunt Cup at Ascot last month.

It wouldn't be a huge shock if they were butting heads in the finish again here, for all this is a completely different test.

But I'm willing to give ACQUITTED a second chance after he bombed out in the 1m2f Golden Gates Handicap.

He was never at it and once his chance was gone Ryan Moore eased right off in the home straight.

Prior to that, he had given subsequent Group 1 winner Palace Pier a good race at Newcastle, so on the return to 1m and in receipt of plenty of weight, he is worth another shot.

Kempton winner Mutasaamy will need to step up to figure here but he is going the right way, while Qaysar has the ability to get involved but is looking an increasingly tricky ride.

A brilliant race in store, and one which could go the way of rising star GHAIYYATH.

He was brilliant in the Coronation Cup, making all the running to beat Anthony Van Dyck and Stradivarius out of sight.

It wasn't a case of him dictating at a steady pace, though. He went near enough flat out from the drop of the flag, clocking some jaw-dropping splits.

The drop back to 1m2f won't be an issue and this track has proven something of a front-runners paradise over the years.

There aren't enough superlatives in the dictionary for the wonderful Enable, and there is zero chance of Frankie allowing Ghaiyyath too much rope on the front-end.

But her big mission (indeed, it's the only reason she stayed in training) is to win the Arc in October, and she is unlikely to be fully wound up for her reappearance when John Gosden's sole aim is to get her to peak in Paris.

Japan looked rusty in the Prince Of Wales's Stakes and it will be a big surprise if he can't better that performance. He isn't opposed lightly with this stiff 1m2f likely to suit.

Deirdre flies the flag for Japan and has had an excellent time of things during her European adventure, but she looks like coming up just shy of the big three.

Magic Wand, Bangkok and Regal Reality are high-class performers in their own right but face an uphill struggle.

This is a big race for FOX CHAIRMAN, who looked so exciting earlier in his career.

He ran flat in the Queen Anne on his reappearance, for all he was keen and looked to badly need the run.

But he returns to his optimum trip here and takes a big drop in class, so it will be disappointing if he can't get back on track here.

French raider Magny Cours is a fascinating runner for Andre Fabre and he claimed the scalp of Persian King last time. He is the main danger.

Dubai Warrior is a classy beast on the all-weather but he flopped badly on his only turf run to date. The jury is out on him on this surface, while Global Giant impressed at Wolves but is in much deeper here.

This trip could prove a touch on the sharp side for the high-class Aspetar, a Group 1 winner over 1m4f in Germany last year.

DEAN STREET DOLL left an underwhelming Kempton run behind her with a solid performance in the Silver Hunt Cup on her second start for David Menuisier.

She never stood any chance of winning that race, having raced in a small group on the far side when it was a significant advantage to race on the stands rail.

But she did well to finish second in her group, keeping on nicely in the closing stages to finish a length behind the favourite Maydanny.

The step up to 1m2f will suit, Ryan Moore takes the ride and Menuisier has an excellent record at this track (25% strike-rate, +£25.10 profit to a level stake).

The lightly-raced Asiaaf is feared most on her handicap debut and she looked to have a bright future when breaking her maiden at Goodwood.

Hat-trick seeker Tulip Fields needs to step forward again off 7lb higher, while Bella Vita would ideally prefer a bit further than this but she has a touch of class and can't be ruled out.

He makes his handicap debut off a very tempting mark, particularly on the strength of his third behind King Leonidas at Newmarket two starts ago.

He was too keen and lost a shoe when a beaten favourite last time, so I'm happy to excuse him that run. He will surely prove better than this rating.

Campari dotted up at Chepstow last time and shouldn't have any issues dropping back to 7f. He has only gone up 3lb but this is a better race, so he needs to keep progressing.

Eshaasy and Star In the Making are the best of the rest.