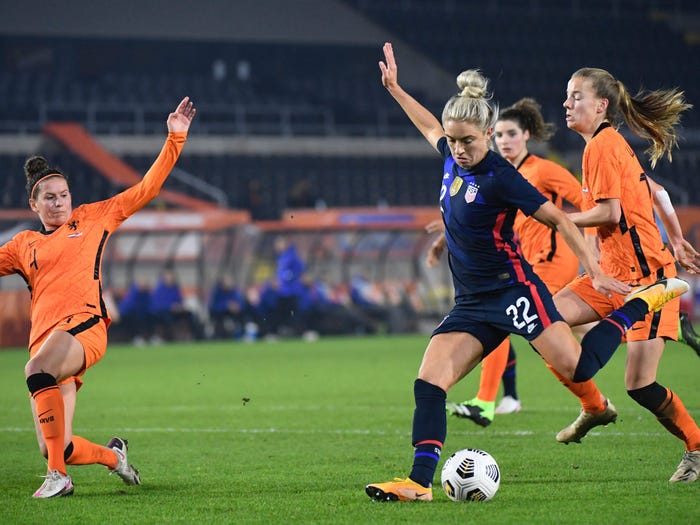 Kristie Mewis made the most of her first appearance with the US Women's National Team in more than six years.

The 29-year-old midfielder scored the second goal in the Americans' 2-0 win against the Netherlands Friday afternoon. After forward Lynn Williams split two Dutch defenders with a one-touch pass into the box, Mewis ran on the ball and delivered a hard, left-footed shot into the right side of the net.

"I just had to rewatch it, actually, because I think I blacked out on what actually happened," Mewis said after the game. "I was so nervous to shoot it but I just wound up and gave it the best I could."

And to top it all off, Mewis' younger sister — star USWNT midfielder Sam Mewis — was the first of her teammates to greet her after she scored.

"Turning around and just realizing what had just happened and seeing Sam and Alex [Morgan] running towards me was so special," Mewis said. "It was a very surreal moment for me. It hasn't really sunk in yet."

Mewis said that she felt "oddly comfortable" rejoining the team after so long partly because she had her sister by her side.

"I was definitely a little bit nervous but I did feel comfortable and I just couldn't wipe the smile off of my face," Mewis said. "I was trying to be so serious but I couldn't. I just saw Sam and she was smiling at me. I did feel oddly comfortable and I think it's because she was on the field."

She also credited head coach Vlatko Andonovski, who first drafted her to the NWSL back in 2013, for giving her a vote of confidence ahead of her first national team cap in more than half a decade.

"He definitely just has this look that he gives you and he did warn me early in the week that I could potentially play," Mewis said. "I have a lot of history with Vlatko [Andonovski] … he kind of gave me a look and was like 'You got this. You can do this' so I think that's all I really needed."

And the newly-minted USWNT head coach was thrilled to watch Mewis thrive on the international stage.

"I am obviously very happy for her," Andonovski said. "To see her going through some adversity and coming back to this team and taking full advantage of the opportunity."

"The fact that she did as good as she did makes me very happy and proud of her," he added.

The USWNT finishes the year with a perfect 9-0-0 record and will next convene at January camp ahead of the 2021 SheBelieves Cup. And with Mewis and several other fresh faces joining the national team in Europe this time around, the national team roster that takes form in the lead-up the Tokyo Olympics could look strikingly different from the lineup that took the field at the 2019 World Cup two summers ago.