What would happen if, while I was popping popcorn, all the kernels popped at once? Should I be worried?

Don’t worry, all of your popcorn kernels won’t pop at once.

Popcorn kernels pop because the water inside them heats up and boils. When water boils, it usually expands, but the tough outer hull of the kernel keeps the steam contained. For a while, the steam keeps getting hotter, until the pressure rises enough to break open the outer hull, releasing the pressure with a popping sound.

A typical bag of microwave popcorn might contain 300 kernels. If all 300 popped at once, the bag might rupture and make a mess, but your microwave would probably be fine. According to the 3M Noise Navigator sound protection database, the average popcorn popper produces about 80 decibels of sound power. A sound wave 300 times more powerful than the noise of a typical popcorn popper would be about as loud as a nightclub and quieter than many power tools. If your microwave can survive the vibrations from being near the speakers at a nightclub, I’d bet it could survive a mega-pop.

But how likely is a mega-pop?

A popcorn kernel pops when its internal temperature reaches about 180 degrees Celsius. The critical temperature is different for each kernel: It depends on how much moisture it contains, how strong the hull is and how quickly your microwave heats the particular area where the kernel sits. Most kernels will take roughly the same amount of time to pop, but some will cross the line earlier or later than others by random chance. If we assume they are heated independently, then there’s no reason they couldn’t happen to reach their critical internal pressure at the same time — it’s just statistically unlikely.

To estimate just how unlikely a mega-pop is, we need to know a little more about popcorn timing. I don’t usually do experiments to answer questions, but I do like popcorn, so I decided to personally gather some data. I put a bag of popcorn in the microwave, recorded the sound with my phone and then looked at the audio in a spectral analyzer, which showed each individual pop clearly. 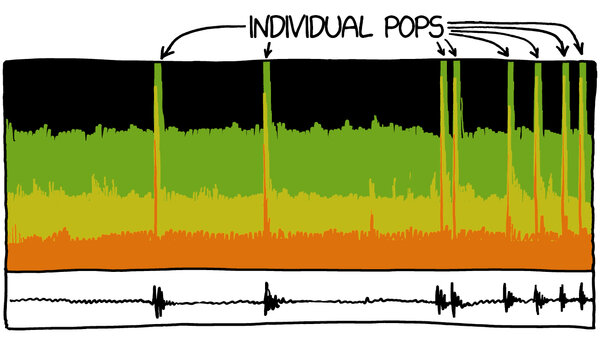 Tallying the results demonstrated that most of the popping happened within a 30-second period around the minute-and-a-half mark.

Just how unlikely is that?

At the time of his death in 1995, the popcorn magnate Orville Redenbacher had 24 living descendants — let’s suppose he has about 50 now, and that they all have phones with U.S. numbers. Now you decide you want to talk to them. You pull out your phone and start dialing digits at random, and somehow you reach all 50 on your first round of calls — without a single wrong number. As they pick up, you correctly guess their birthdays and the last four digits of their Social Security numbers. Once you’re done with those calls, you take out a sheet of paper and write down the winning Mega Millions jackpot numbers for the next seven lottery drawings. Finally, you guess the result of 100 coin tosses in a row.

The odds of successfully accomplishing all of those tasks on your first try with no mistakes are small, but they’re still better than the odds of every popcorn kernel in a bag popping all at once.

So I wouldn’t worry about it.