A series of hilarious tweets that went viral on social media throughout the coronavirus pandemic have been added to the Museum of London’s ongoing ‘Collecting COVID’ project.

The selected posts from the first wave of the pandemic went viral for their wit and resonance with the general public at a time when national morale was at an all-time low.

Dubbed ‘Going Viral’, the project builds on an extensive pandemic-specific collection which includes recordings of the eerily empty streets of central London and comparing them to recordings taken by the Daily Mail in 1928.

The tweets include popular memes based on popular culture, funny videos shared on Twitter originally from TikTok and comical observations shared with the world via the microblogging site. 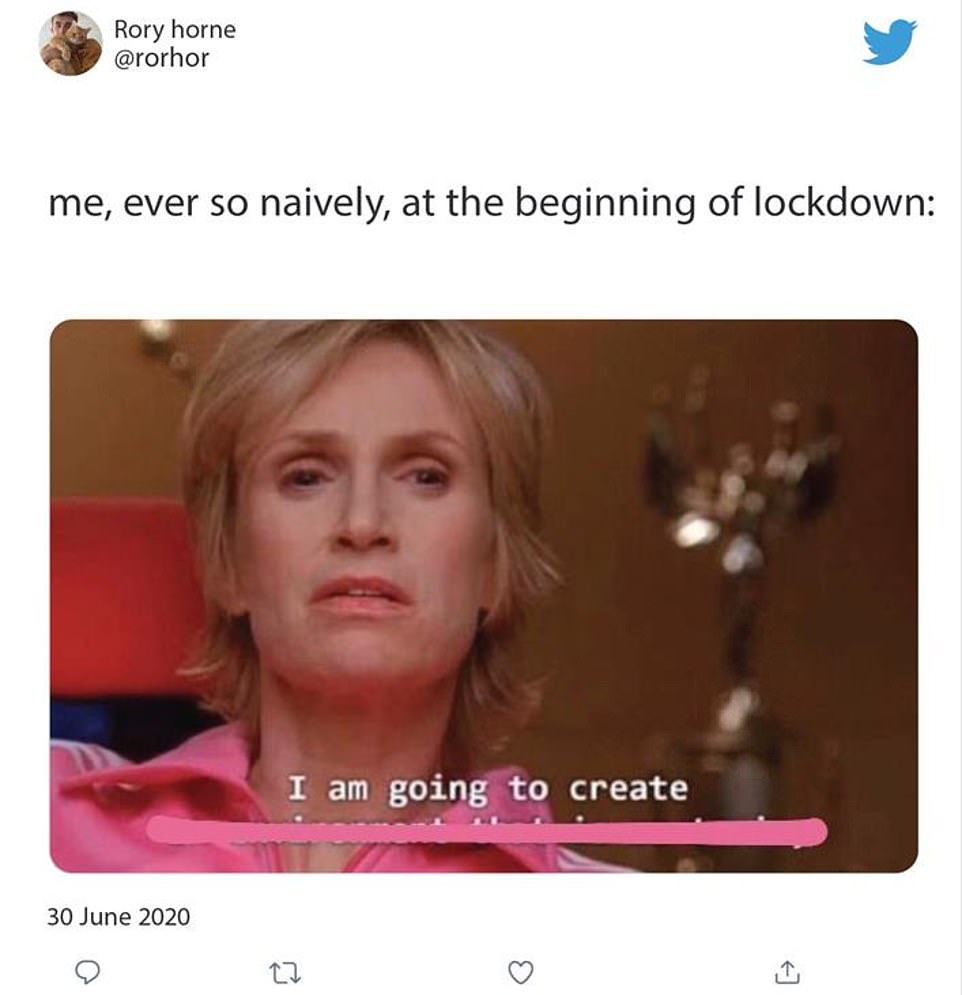 The subtitles screenshot from the show Glee sees Sue Sylvester (played by Jane Lynch), saying “I am going to create an environment that is so toxic”. But the internet has repeatedly edited the text and even the face for topical humour. This tweet speaks to the early-pandemic optimism, with Britons trying to bake, learn a language and take up new hobbies

Foteini Aravani, Digital Curator at the Museum of London, told MailOnline: ‘Humour and sarcasm have always been an inherent characteristic of Londoners, but especially employed as coping mechanisms throughout history in times of crisis and hardship.

‘The COVID-19 pandemic has been no different with imagination, creativity and wit uniting us in never before seen ways while we’re physically separated by social distancing measures.

‘We decided to focus on Tweets as Twitter first coined the term ‘going viral’ and we tried to identify content that was ‘shared’ or ‘liked’ by at least 30,000 different people, creating a vital virtual form of camaraderie between Londoners in the lockdown.’

Ms Aravani adds that the museum spoke with Twitter directly and found a surge in social activity during the pandemic was an integral part of lockdown for Londoners.

‘[The tweets] will form a key part of Collecting COVID which aims to help future generations understand this extraordinary time,’ she says.

David Wilding, head of planning at Twitter UK, said: ‘In a year where we were forced to be physically distant, people came together virtually on Twitter.

‘These Tweets collected by the Museum of London capture how a sense of humour and a true sense of community helped people in London cope and help each other.’ 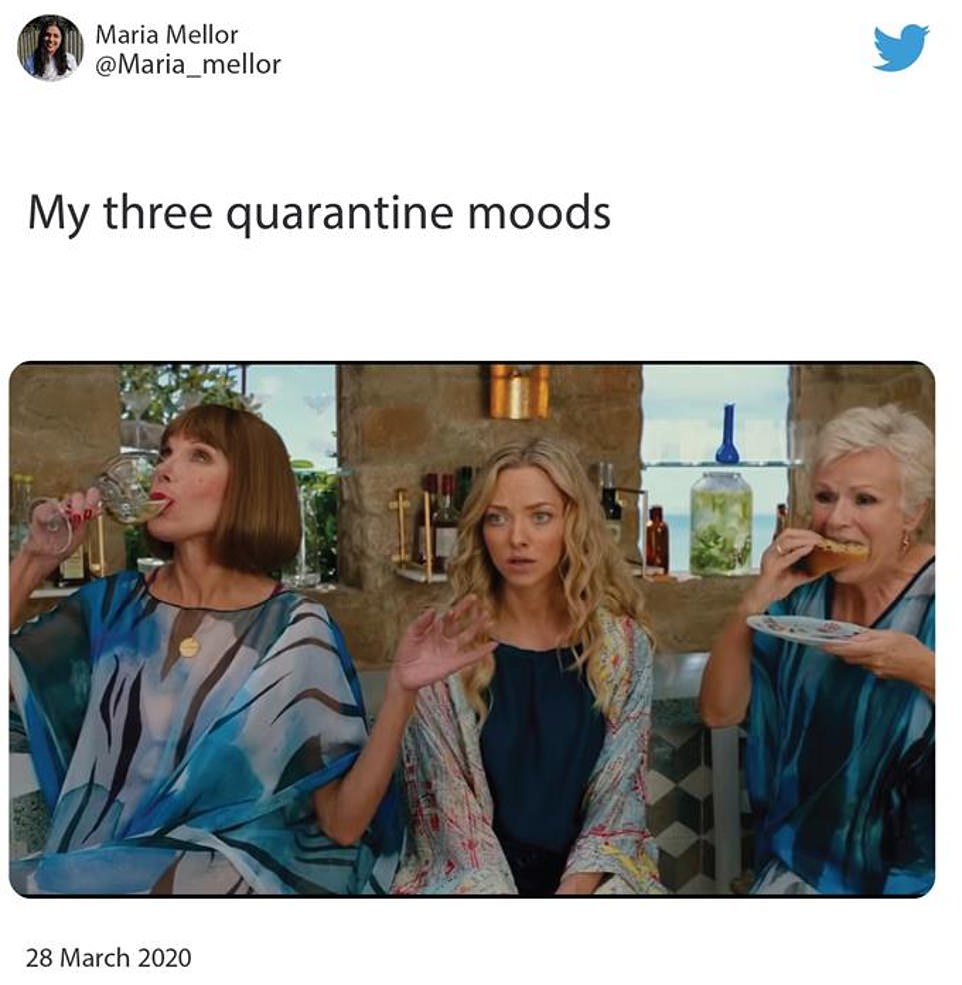 Many people, whether they should have or not, turned to alcohol to get through lockdown (left), with others feeling a sense of constant hopelessness (middle) and others turning to comfort eating (right) 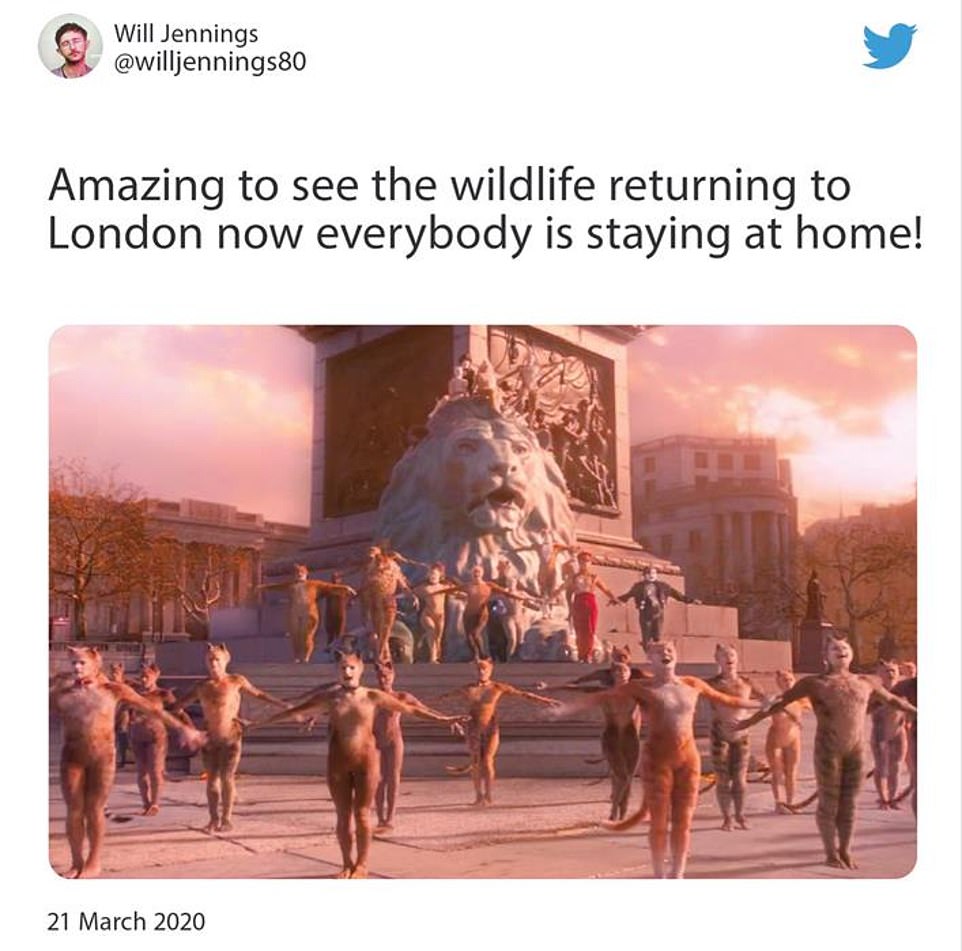 Pop culture references, such as the film Cats (pictured) have long been a stalwart of Twitter, but the repurposing of images to indicate the emptiness of London was a trend in March

The Museum of London’s Collecting Covid project also recently recorded road noise from the capital’s empty streets and compared it with gramophone recordings from nearly a century ago.

Initial recordings were taken at five London locations as part of a campaign by the newspaper to draw attention to the growing rabble on the city’s streets.

One of the five records was aired by the BBC, but the rest have never been aired or available to listen to in their entirety until now.

Archived clippings from 92 years ago reveal growing concern over traffic noise referred to as a ‘vague roar’ and ‘pandemonium’.

Culprits of the era included motor-omnibuses, horse-drawn drays, tramway-cars, lorries and the whistle of a policeman controlling traffic.

Last month it was announced the vial and syringe of the first ever Covid-19 vaccination will go on display next year at the Science Museum.

On December 8, a 90-year-old grandmother in Coventry became the first person in the world to receive a Covid-19 vaccine outside of clinical trials.

The eyes of the world were trained on Margaret Keenan as she got the jab at 6:45am when a nurse injected her arm with the mRNA vaccine made by Pfizer and BioNTech.

The momentous occasion made global headlines and offered the first glimmer of hope for months that the Covid-19 pandemic, which has claimed more than 1.6million lives worldwide, may be drawing to an end.

It may soon become known as one of the greatest triumphs in all of science, with Mrs Keenan’s dose likely to be etched into the history books.

As a result of its gravity, both the empty vial and Mrs Keenan’s syringe have been saved from the biohazard scrapheap by the Science Museum. 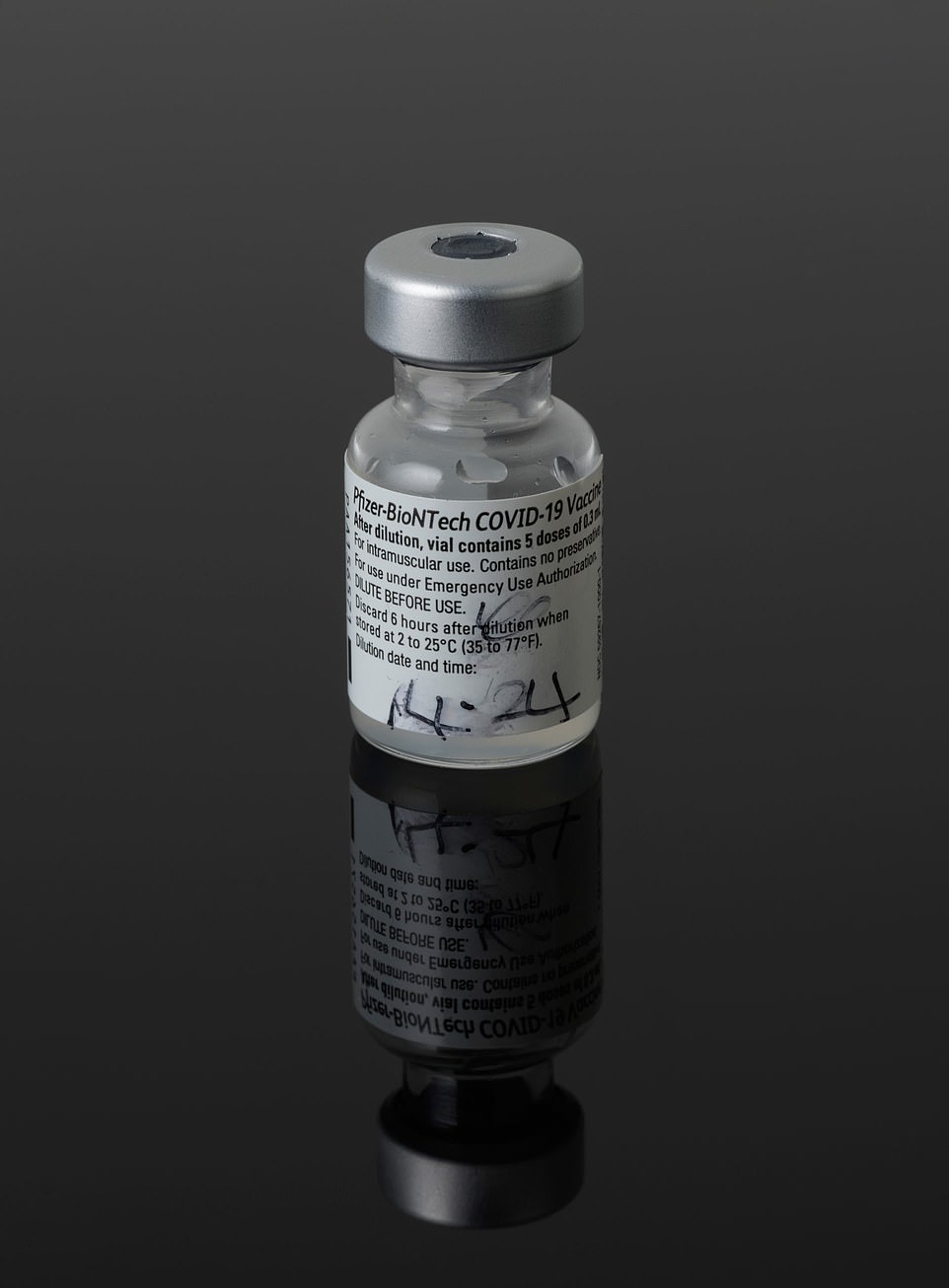 Last month it was announced the vial 9pictured) and syringe of the first ever Covid-19 vaccination will go on display next year at the Science Museum. On December 8, a 90-year-old grandmother in Coventry became the first person in the world to receive a Covid-19 vaccine outside of clinical trials