Last year was the warmest ever: Met Office reveals Britain’s annual average temperature for 2022 topped 10C for the first time since records began in 1884

The UK’s annual average temperature topped 10C for the first time in 2022, as last year was confirmed as the country’s warmest on record.

It means 15 of the UK’s top 20 warmest years on record have all occurred this century – with the entire top 10 within the past two decades. 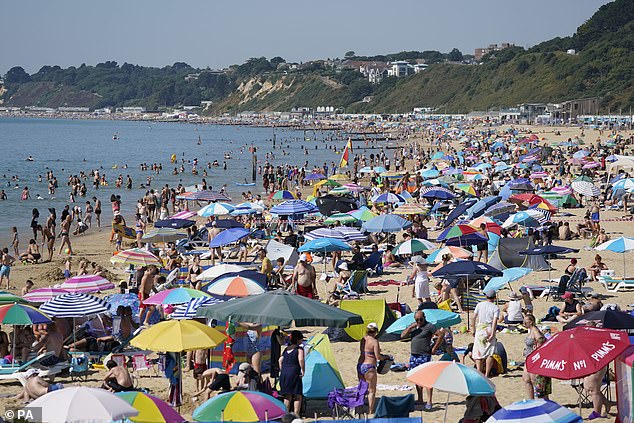 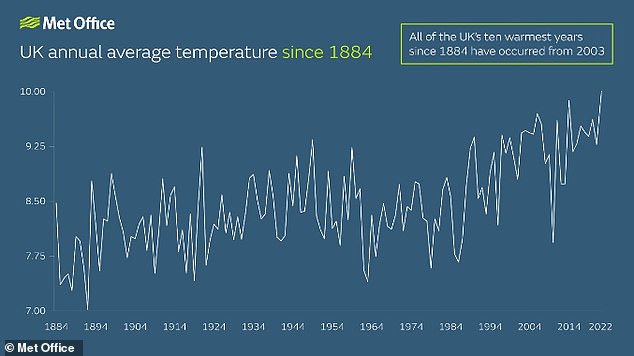 The Met Office dubbed a mean 10C temperature as a one in a 500 year event, but added it will now take place every three to four years due to climate change.

Research by the body’s scientists has found that climate change driven by humans made the UK’s record-breaking annual temperature around 160 times more likely to occur.

Dr Mark McCarthy, head of the Met Office National Climate Information Centre, said: ‘Although an arbitrary number, the UK surpassing an annual average temperature of 10C is a notable moment in our climatological history.

‘This moment comes as no surprise, since 1884 all the 10 years recording the highest annual temperature have occurred from 2003.

‘It is clear from the observational record that human-induced global warming is already impacting the UK’s climate.’

Figures also show that 2022 was the warmest on record in the 364-year Central England Temperature (CET) series, which began in 1659 and is the world’s longest-running temperature dataset. 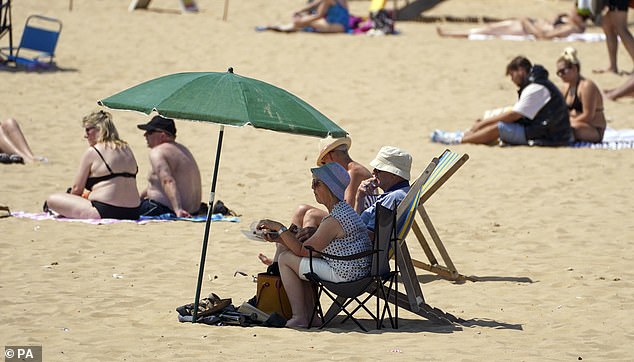 Britons saw top temperatures of 40.3C on July 19 last year, as climate change continues to take its toll on the planet 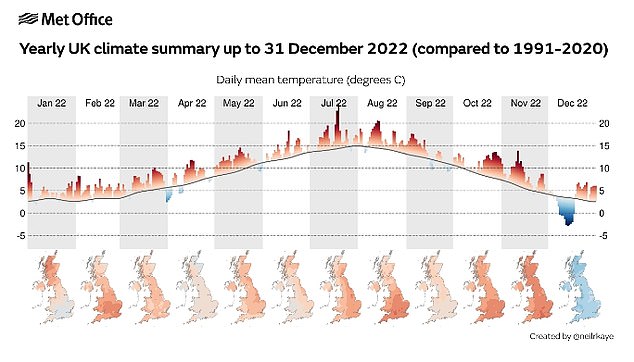 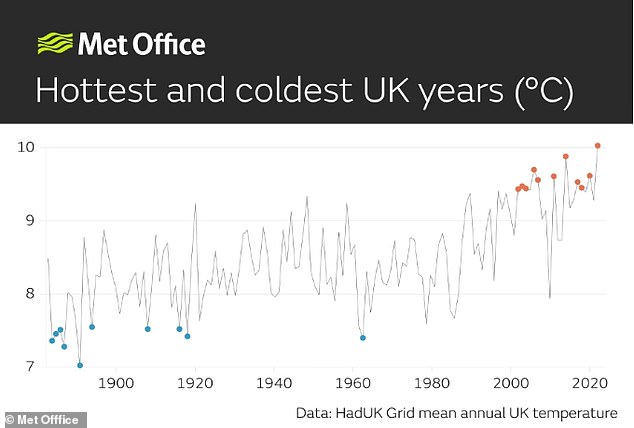 It comes as UN experts estimated ahead of November COP27 talks in Egypt that the world was on track to warming of 2.1 to 2.9 C – but some outside analysts put the figure well higher, with greenhouse gas emissions in 2021 again hitting a record despite pushes to renewable energy.

The spell of hot weather saw temperatures peak at above 40C for the first time ever, reaching 40.3C on July 19.

Global warming is one of the most serious threats facing the world this century, with climate activists and the UN warning urgent action is needed immediately to cut the use of fossil fuels.

Despite this, a controversial move by the UK government last month saw Michael Gove approve the first new UK coal mine in decades.

Labour MP for Warwick and Leamington Matt Western said the figures make for an ‘utterly sobering start to the new year’.

Met Office Climate Attribution Scientist, Dr Nikos Christidis, said: ‘To assess the impact of human induced climate change on the record-breaking year of 2022, we used climate models to compare the likelihood of a UK mean temperature of 10C in both the current climate and with historical human climate influences removed.

‘The results showed that recording 10C in a natural climate would occur around once every 500 years, whereas in our current climate it could be as frequently as once every three to four years.’

He added by the end of the century, the UK could see a mean of 10C almost every year.

Luke Kemp, a Cambridge University expert on existential risks, said last month that the possibility of higher warming was drawing insufficient attention, which he blamed on the consensus culture of the UN’s Intergovernmental Panel on Climate Change and scientists’ fears of being branded alarmist.

‘There has been a strong incentive to err on the side of least drama,’ he said.

‘What we really need are more complex assessments of how risks would cascade around the world.’

Kemp warned against extrapolating from a single year or event. But a research paper he co-authored noted that even a two-degree temperature rise would put the Earth in territory uncharted since the Ice Age.

This story is being updated.