Jana Kramer gave a loving snapshot of life with her two kids, 6-year-old Jolie and 3-year-old Jace. The actress and singer shared candid footage of her little ones dancing, playing music, hula hooping and having a blast on the merry-go-round, all set to the song “I Get To Love You” by Ruelle.

“Today, tomorrow, forever the best thing I’ll ever do 🤍,” Kramer wrote alongside the sweet video.

The One Tree Hill star is a celebrity mom who shares the fun stuff and the tough stuff on Instagram. She posts adorable gems like the one above and also gives an intimate look at some of her more vulnerable moments. Last year, Kramer took to social media to offer insight into her parenting struggles.

“Motherhood. It’s by far the greatest thing in the world and also the most challenging,” she wrote, per Yahoo. “Today was a challenging one. The one where it tests you to your core. After screaming kids, not listening and literally being bitten by Jace at soccer…I have never felt more love and joy as a mother but I’ve also never been tested this much to my core either. The patience, the deep breaths, the not doing it perfect and then hiding around the corner to cry.”

She added an important message to all the other single moms out there. “I’m here to tell ya you’re doing a great job, it’s okay to breakdown, it’s okay to not be perfect, it’s okay. You’re crushing it,” Kramer said.

In 2021, the actress split up with her husband, former football player Mike Caussin, after six years of marriage. Kramer opened up in an interview with Extra host Billy Bush about Caussin’s unfaithful behavior. 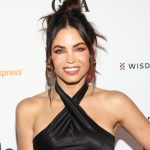 “That and some more. … Let’s just say it was bad enough I had no choice,” she replied.

A source told PEOPLE that Caussin’s straying was allegedly at the root of the split.

“He cheated and broke her trust again,” the insider explained in an interview. “After fighting for the marriage for so long, she’s come to terms with the realization that his patterns were never going to change.” The focus in now on their kids, the source added.

There must be a whole lot of recovery and healing going on for Kramer right now. We’re glad to see she’s enjoying some wonderful moments with her children and continuing to share her journey with us all — the good and the bad.