Zendaya was seen in a rare photo with her mother Claire Stoermer during Monday’s ELLE’s 26th Annual Women in Hollywood Celebration at the Four Seasons Beverly Hills.

The two looked to be happy as they listened to speeches from Gwyneth Paltrow and Natalie Portman.

The Spider-Man star’s mother has been an important part of her life, taking her from the once crime-ridden Oakland, California to mega fame in Hollywood. 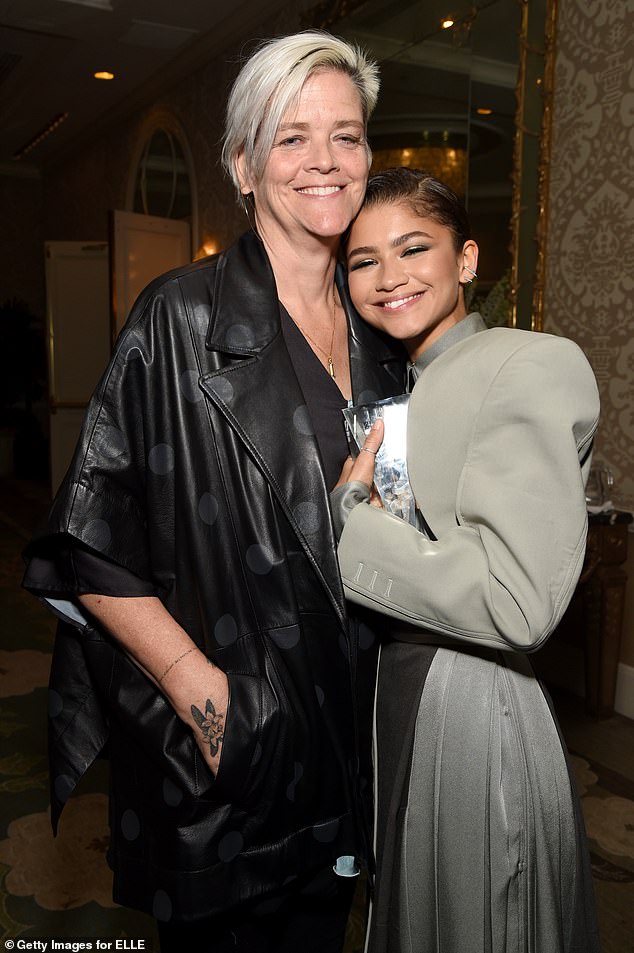 Her mommy: Zendaya was seen in a rare photo with her mother Claire Stoermer during Monday’s ELLE’s 26th Annual Women in Hollywood Celebration at the Four Seasons Beverly Hills

Her mother was the one who introduced her to the world of theater – Claire was also House Manager at the California Shakespeare Theater in Orinda. Zandaya has said her passion for acting blossomed in this environment.

But Claire’s main job was as a teacher.

Zendaya told Teen Vogue: ‘Growing up, I watched my mom teach in the heart of Oakland, California, at inner-city schools that were always underfunded. 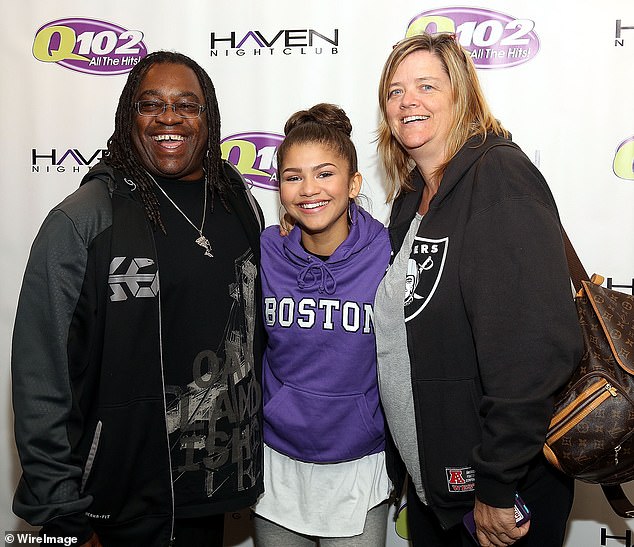 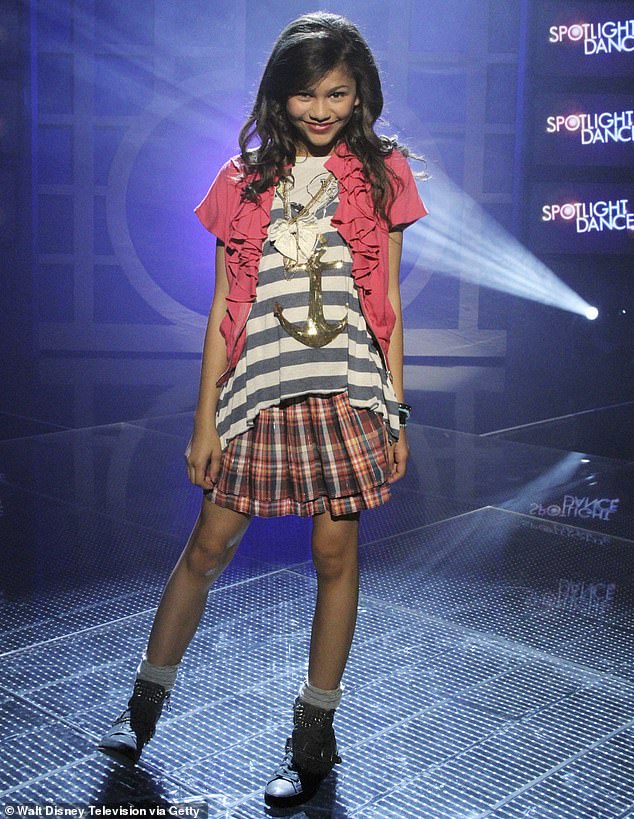 Baby Z: She started acting at a young age; seen here on Shake It Up in 2010 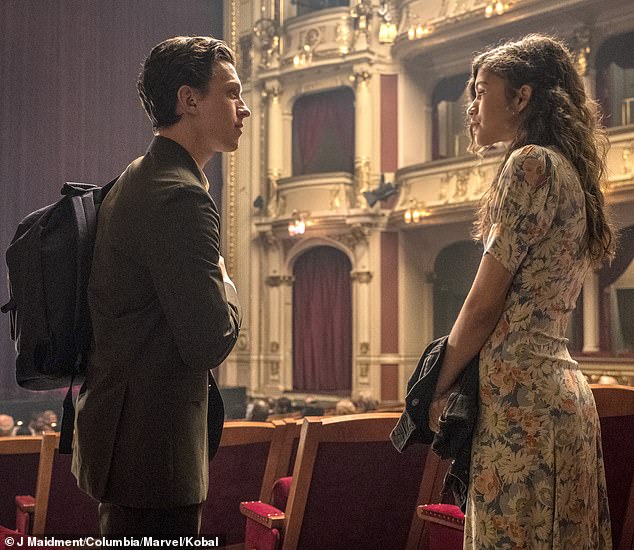 More recent: Here she is seen with Tom Holland in Spider-Man: Far From Home

‘My mom went above and beyond, working constantly to open her students’ eyes to an education that could lift them far beyond their current circumstances.

‘She would introduce them to the arts, guide them through the language of Shakespeare, and show them the wonders of nature outside city life — all things that they wouldn’t have experienced otherwise.

‘Watching her was magical; it instilled within me a true appreciation of and devotion to the importance of education.’

At the Elle event, the 23-year-old model-actress cut an avant-garde figure in a getup that combined a blazer, a button-up, a skirt, pants, and a belt all in a silver satin fabric. 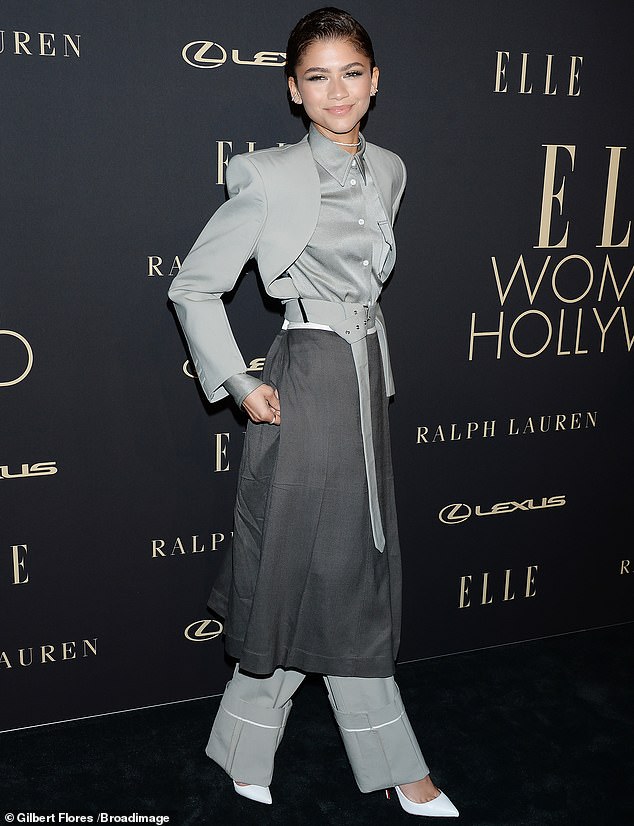 Silver star: Zendaya showed out to accept her accolades on Monday

She kept her accessories low-key with a metallic choker and stud earrings.

Zendaya coordinated her makeup with her outfit with a dusting of olive green shadow with a glint of shimmer.

The Euphoria star took to the podium to make a speech alongside fellow honorees Mindy Kaling, Nicole Kidman, and Dolly Parton. 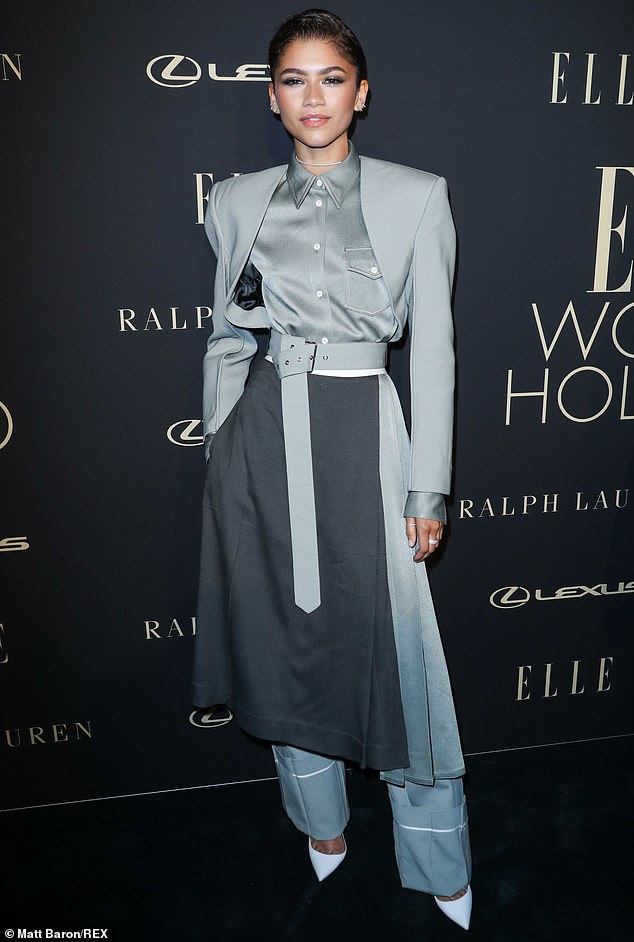 Sleek: The 23-year-old model-actress cut an avant-garde figure in a getup that combined a blazer, a button-up, a skirt, pants, and a belt all in a dusty green satin fabric She opened up to ELLE in an official Women in Hollywood interview about her battle with anxiety and her tendency to beat herself up.

‘Even though Euphoria coming out was amazing and exciting, it was also extremely stressful,’ she said.

‘It gave me a lot of anxiety every week. That’s something I deal with; I have anxiety. I already know after this interview is over, I’m going to spiral about it for weeks.’ 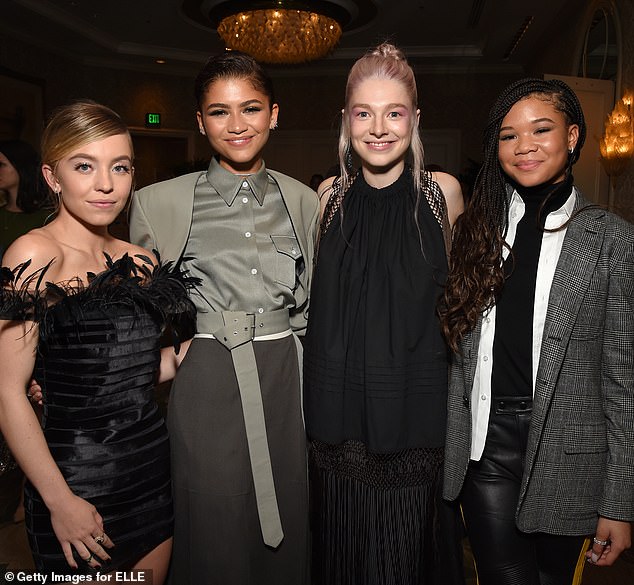 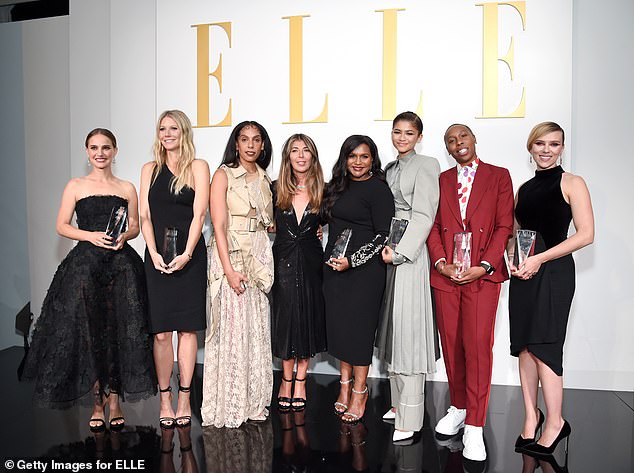 Zendaya went on to say that over the years she has learned to trust herself more.

But this hasn’t stopped her from setting high standards for herself: ‘I never want to mess up.’

‘I’m trying to be the best version of myself without overapplying pressure. Then I start spiraling.’

But continued that she’s grateful that others appreciate what she does: ‘I know, I’m super hard on myself.’

‘People actually saying I did a good job at my craft … it’s like, “Damn, I did work hard. I’m glad you see that.” I should finally own that; it’s liberating. I feel lucky.’ 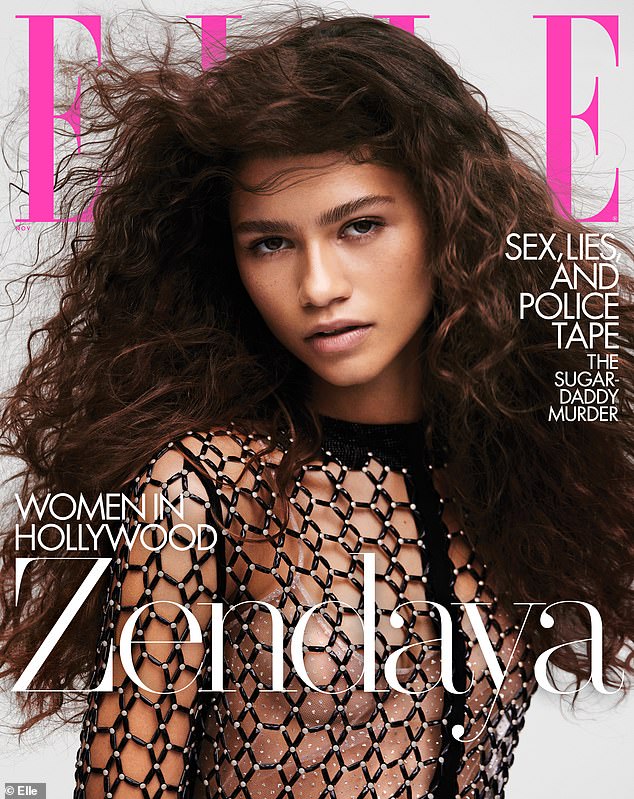 Lucky lady: ‘People actually saying I did a good job at my craft … it’s like, “Damn, I did work hard. I’m glad you see that.” I should finally own that; it’s liberating. I feel lucky,’ she told Elle