Brooklyn Beckham and Nicola Peltz enjoyed a casual date night on Saturday as they shared frozen yogurt together in Beverly Hills.

Nicola, 27, cut a stylish figure in a leather jacket and added inches to her frame in a pair of thigh high black boots as she walked down the street with her beau, 23.

She flashed her toned midriff in a simple black crop top which she teamed with a midi skirt with a large split at the front. 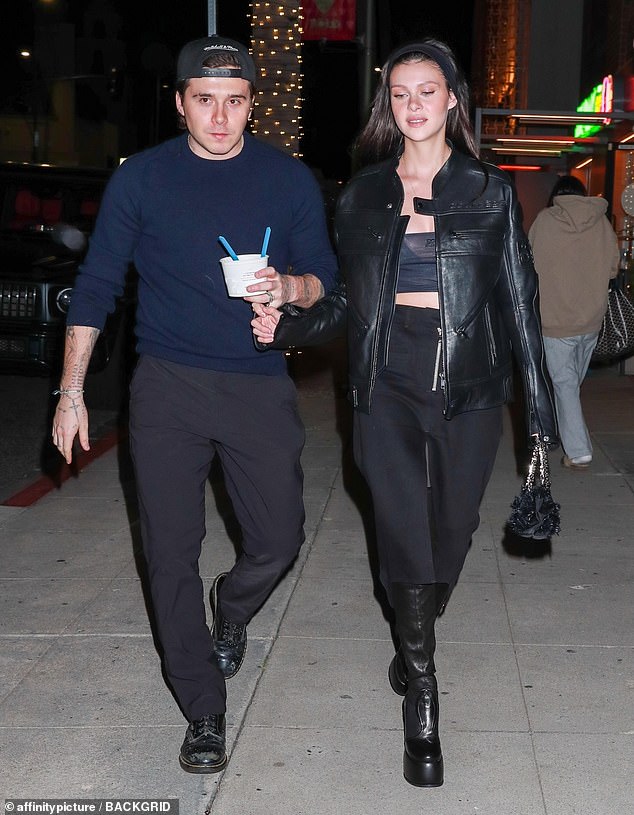 Loved-up: Brooklyn Beckham and Nicola Peltz enjoyed a casual date night on Saturday as they shared frozen yogurt together in Beverly Hills

The actress carried her belongings in a ruffled bag with a dazzling strap and swept her dark tresses out of her face with a headband.

Meanwhile Brooklyn opted for a navy sweatshirt with a pair of black trousers and smart shiny shoes.

The son of Victoria, 48, and David Beckham, 47, hid his long locks under a dark baseball cap which he wore backwards. 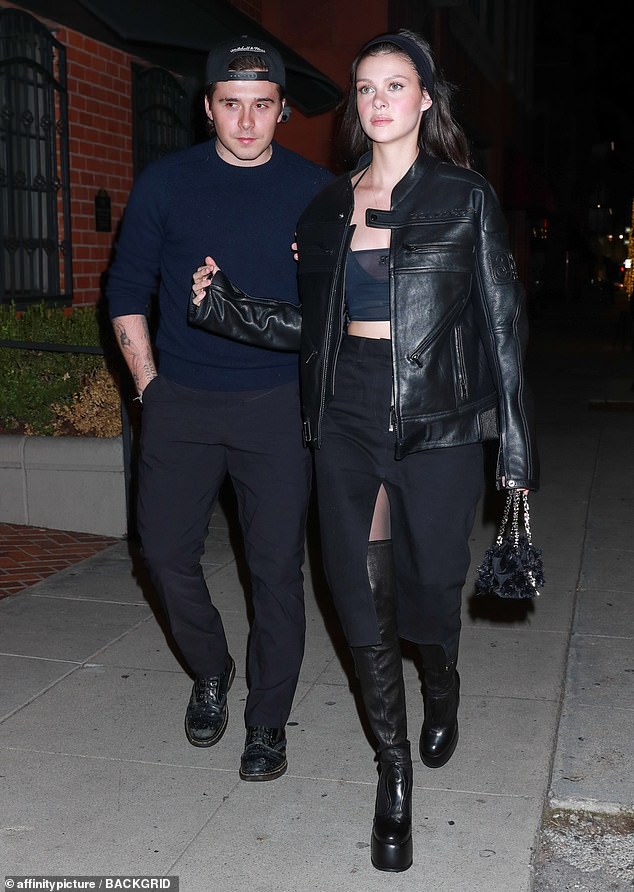 Date night: Nicola, 27, cut a stylish figure for the outing in a black leather jacket and thigh high boots as she walked down the street with her beau, 23

The aspiring chef recently revealed he’s ready to start a family with wife and has ‘always wanted’ to be a young father, following in his dad’s footsteps.

Brooklyn told People’s Magazine dreams of having ‘a bunch’ of kids but knows he needs to wait until his wife Nicola is ready to start a family. 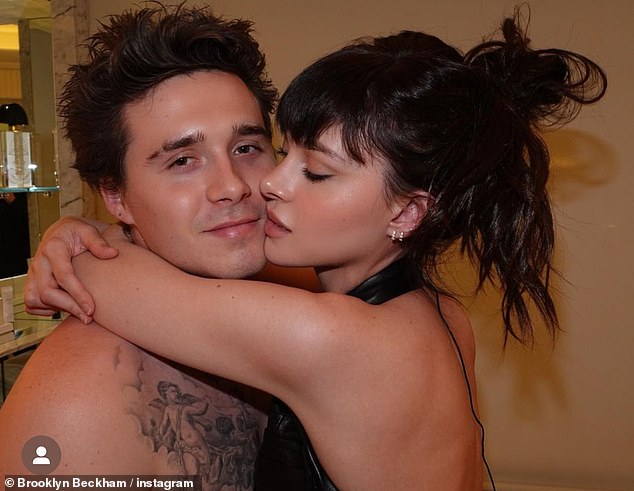 ‘I could have had kids yesterday’: It comes after Brooklyn revealed he’s ready to start a family with his wife Nicola 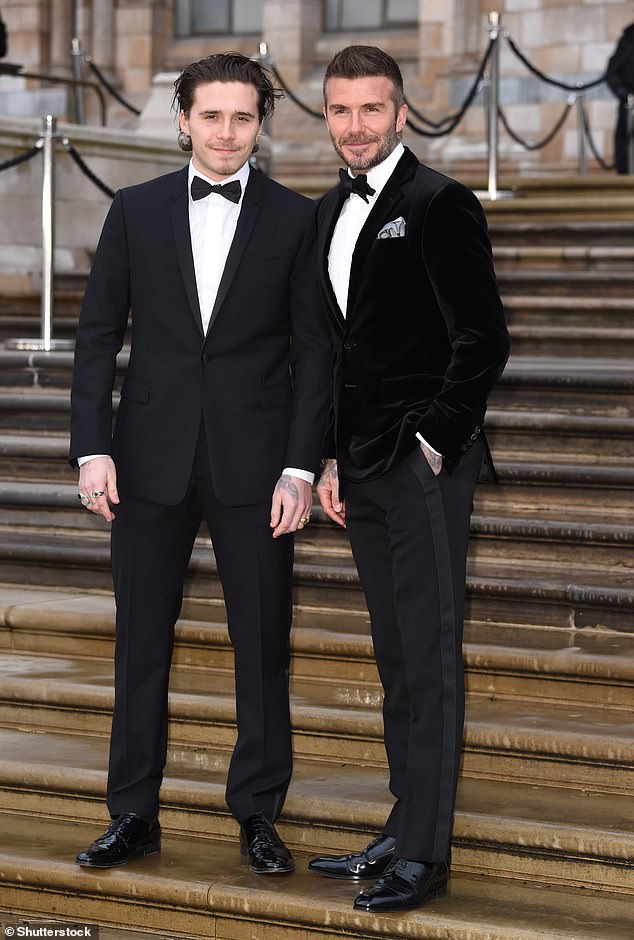 Family: The aspiring chef – who is the son of David and Victoria Beckham – has ‘always wanted’ to be a young father, following in his dad’s footsteps

Brooklyn loves nothing more than quiet nights at home with Nicola, who he married in April, and their pet dogs.

Speaking to People magazine’s upcoming 2022 Sexiest Man Alive issue – in which he appears as part of a portfolio of famous sons – he said: ‘Her family lives in Florida and mine in the UK, but we have our own life out here in LA and it’s really really lovely. Just having each other’s company, it’s the best.’

It comes after Peltz revealed that she and Brooklyn plan to have up to eight children together. 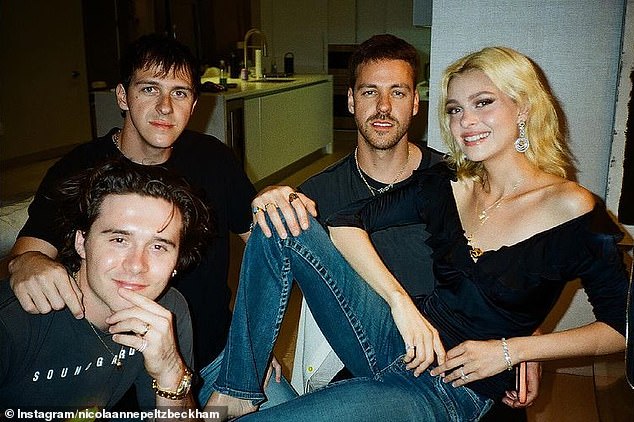 Wow! Nicola has a whopping seven siblings from her parents billionaire businessman Nelson Peltz and model Claudia Heffner (pictured with Brooklyn and two of her brothers)

The actress said that her and her husband want ‘a big family’ as they both come from large broods.

Nicola has a whopping seven siblings, with six brothers, Brad, Will, Matthew, Diesel, Zachary, Gregory and a sister named Brittany.

Speaking to The Sunday Times magazine, Style, Nicola revealed Brooklyn is keen to have children straight away.

She said: ‘He wants kids yesterday. I think in a couple of years. We definitely want a big family. He has three siblings, I have seven.’

When asked if she would have eight children, Nicola said: ‘It’s a lot but… I don’t know.’

She added: ‘We want to adopt some kids, have some of our own. That would be the dream.’ 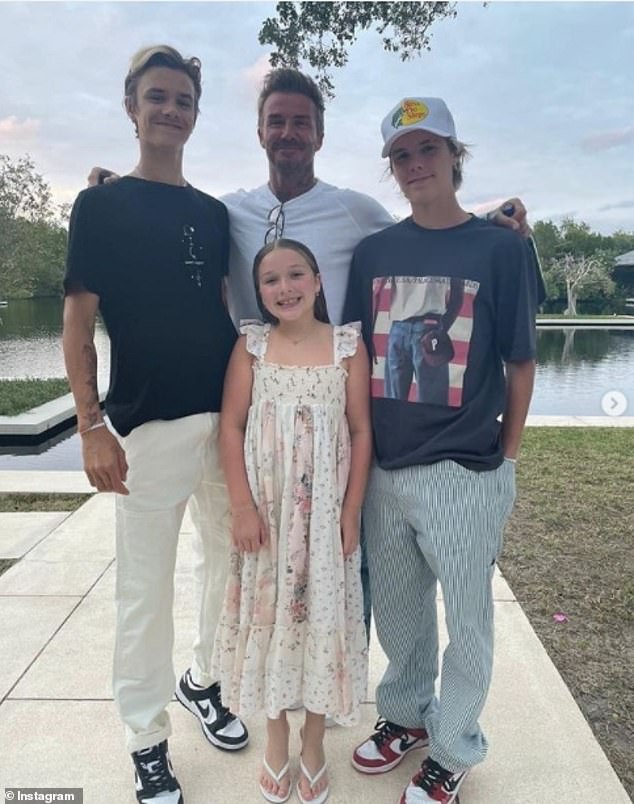 Big family: While Brooklyn is the eldest of four children: Romeo, 19, Cruz, 17, and Harper Seven, 11 (pictured with David)